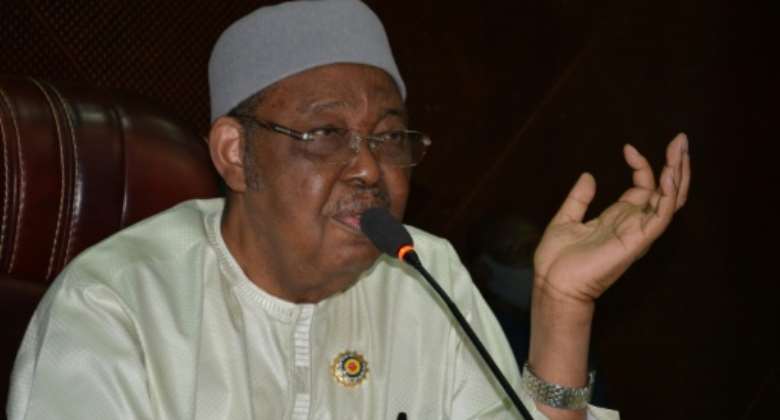 Veteran politician Haroun Kabadi has been named speaker of the interim parliament, whose members were designated last month by Chad's ruling junta. By Djimet WICHE AFP

Chad's interim parliament took office on Tuesday nearly two weeks after its members were named by the military junta that emerged following the death of long-time ruler Idriss Deby Itno.

The 93-member assembly, called the National Transition Council (CNT), approved Haroun Kabadi as its speaker through a vote by acclamation.

Kabadi, 73, was speaker of the former National Assembly, which was dissolved after Deby was killed fighting rebels earlier this year and succeeded by his son, 37-year-old General Mahamat Idriss Deby Itno.

"Our goal isn't to oppose the government systematically but to look for the ways and means to create stability," Kabadi said in his acceptance speech.

Parliament's main task is to "organise free and transparent elections in order to set down the institutional bases of a post-transitional Chad," he said.

A former French colony in the heart of the arid Sahel, Chad has a long history of volatility, authoritarianism and entrenched poverty.

None of the CNT's ranks includes any member from the Wakit Tama opposition alliance, which is campaigning for a return to civilian rule.

Deputies were appointed on September 24, with numbers divided up according to a quota system -- at least 30 percent from the old National Assembly, 30 percent women and 30 percent young people.

General Mahamat Idriss Deby Itno, centre, took the helm at the head of a 15-member junta after his father was killed fighting rebels in northern Chad. By Djimet WICHE AFP

After taking power, the junta, comprising the younger Deby and 14 other generals, dismissed the government, dissolved parliament and rescinded the constitution.

It promised to hold "free and transparent" elections within a timeframe of 18 months, renewable once.

It also vowed to swiftly designate an interim parliament that would adopt a revamped constitution crafted by an "inclusive national dialogue."

But doubts about whether the timetable will be met are growing steadily.

It took the regime five months to name the interim parliament, and there has been no sign of movement on the "national dialogue".

Nor has there been any visible progress on another junta initiative -- overtures towards rebel groups based in Sudan and Libya that have been a headache for Chadian rulers for decades.

"The delay in setting up the CNT will have an impact on the declared timetable. It will be impossible to meet the 18-month deadline," said Chadian political analyst Ousmane Houzibe.

"The CNT is an echo chamber -- there won't be any change," said Yaya Dillo, a veteran Socialist activist.

"It will be no different from the old National Assembly, and that skews the much-expected dialogue," said Max Loalngar, Wakit Tama's spokesman and head of the Chadian League of Human Rights.

The younger Deby himself said in June that he did not rule out an extension of military rule if the conditions for restoring civilian rule were not met.