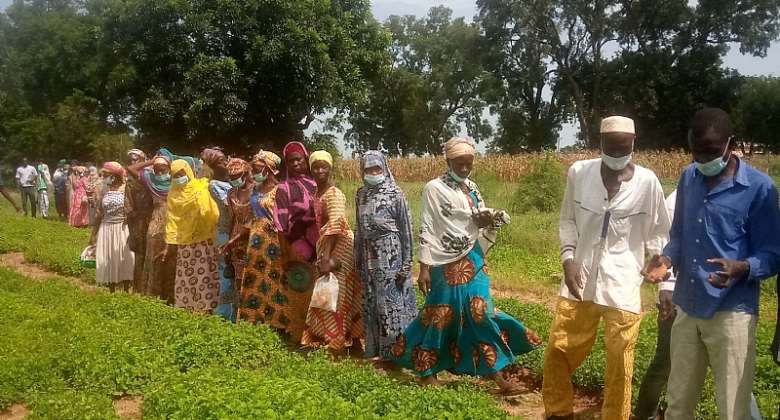 The Savannah Agriculture Research Institute of the Council for Scientific and Industrial Research (CSIR-SARI) has organised a PVS of 12 promising Frafra potatoes accessions in Manga, Bawku in the Upper East Region.

It was organised by CSIR-SARI and sponsored by the West Africa Centre for Crop Improvement (WACCI), under the leadership of the Executive Director Prof. Eric Danquah of the University of Ghana (UG) Legon.

Professor Danquah gave the seed grand to support the Frafra potato research. The Coordinator of the Frafra potato program at The Crop Science Department of University of Ghana Legon, DR Amissah Naa Lamle, has been collaborating with the Acting Director of CSIR-SARI, Dr. Francis Kusi, in this project.

In an interview with our ModernGhana News at Manga in Bawku, the Principal Investigator and Acting Director of CSIR-SARI, Dr Francis Kusi stated that, CSIR-SARI practice the farming systems research programme, where they have Research Station in the then three Northern Regions with a set of scientists to carry out research that meets the need of farmers in field and fibre crops production.

Dr Kusi said Frafra potato is one of the crops that is underutilised in Northern Ghana although it plays a very crucial role in the achievement of food security in Ghana. He added that, due to lack of quality planting material at the time of planting, the farmers can hardly produce enough for consumption thoughtless of selling.

It is against this backdrop that, CSIR-SARI through research, has come out with the vegetative propagation of Frafra potato to help the farmers boost their scale of production which will further increase food security in Ghana.

Dr. Kusi hinted that this time around CSIR-SARI in collaboration with the Crop Science Department of University of Ghana Legon has come out with 12 best accessions from over 400 assassins from Ghana and Burkina Faso.

The PVS exercise was to afford the farmers the opportunity to assess the field performances of the 12 promising accessions and to select those that meet their preferred traits. He stated that the farmers' selection will help them present what the farmers are willing to adopt for inspection and recommendation by the National Variety Registration and Release Committee (NVRRC).

He added that the evaluation of the promising accessions is being done in different agro-ecological zones, including the forest zone in Southern Ghana. This is aimed at widening the production zones of the crop in Ghana.

In all, about 200 farmers, mostly women, drawn from Bawku municipal and its adjoining Districts, research staff of the Institute and postgraduate students from other Universities studying under the supervision of Dr. Kusi participated in the exercise.

The farmers were grouped into tens and taken through the field to assess and select the accessions they preferred most among the 12 accessions being evaluated by the research team based at CSIR-SARI and University of Ghana Legon.

At maturity, the farmers will be invited for another round of assessment based on maturity period, yield, and tuber characteristics.