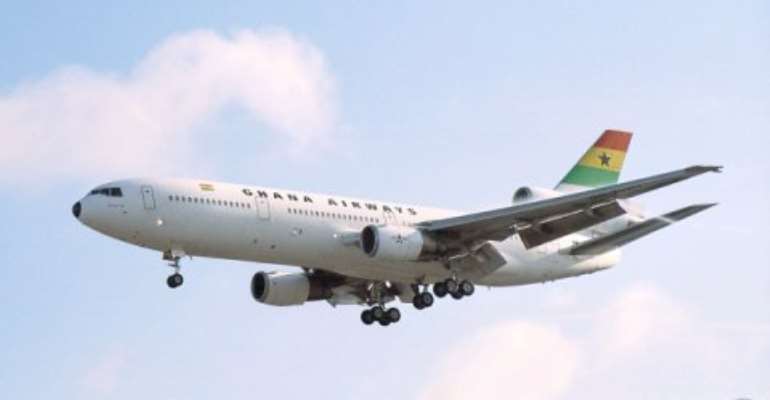 Aviation experts have warned that the troubled national carrier, Ghana Airways, could fold up before the anticipated government rescue package arrives as the airline's problems continue to worsen with each passing day. The airline, currently bogged down by a $150 million debt is fast becoming a pale shadow of itself as the last of its numerous strongholds, the West African coast, has been virtually taken over by bigger and better-resourced competitors in the aviation industry. The Ghana Civil Aviation Authority has confirmed receiving several applications from numerous airlines to increase the frequency of their flights to and from the Kotoka International Airport (KIA). British Airways last week announced the commencement of a daily BA flight on the profitable Accra-London route effective last Tuesday (April 2). Other major airlines expected to announce daily flights to and from Accra include the Royal Dutch Airlines (KLM), its subsidiary Kenyan Airways and the German Airline, Lufthansa. Ghana Airways is the only airline in West Africa with the international accreditation –AAA- the collapsed Air Afrique was the other. Mounting financial and managerial problems have been attributed to the unpredictable flight schedules of the airline, which result in frequent cancellation of flights. The government has delayed the disbursement of any rescue financial packages for the troubled national airline pending the outcome of forensic audits into the company. The precarious financial position has forced the airline to cut down on its schedule to most of the capitals in the sub region. It has cancelled its three times daily flights to Dakar, Senegal enabling Ethiopia Airlines, one of the few best performing airlines on the continent, to take over the route. While the fate of the Accra-Johannesburg route is currently shrouded with uncertainty though Ghana Airways still flies to Lagos twice daily. One of the airlines' flagship routes, the Accra-London route, has also suffered from the worsening financial position doing one flight a week instead of the previous four times a week schedule. Despite the airlines' troubles, a number of aviation experts who talked to the Network Herald were optimistic that Ghana Airways' could very easily return to its previous profit levels, considering the huge potential of the West African market. "Look at how all the big players are scrambling to have daily flights from the Kotoka International Airport," an aviation source said. Attempts by the airlines new management to forge alliance with other airlines including an attempt at a joint operation on the Accra - Johannesburg route with South Africa Airlines (SAA) was dramaticallyrejected by SAA citing Ghana Air's weak financial position. The proposal from SAA was for a 49% equity participation in the joint operation, which the South Africans were keen to expand on their operations beyond the Southern African region. Another planned alliance with Ethiopian Airlines has been suspended for the same reason. Ghana Airways was recently suspended from the clearinghouse of the International Airline Transport Association (IATA) impacting negatively on the airlines' fortunes. The suspension has affected its relationship with other airlines and brought into question, its credit worthiness. But a member of the airline’s Senior Officers Association was quick to point out that that was an airline that could net 53 million dollars annually only a few years ago. Following the September 11 terrorist attacks on the US, Ghana Airways has also lost about two-fifths of its passengers on its North American route.