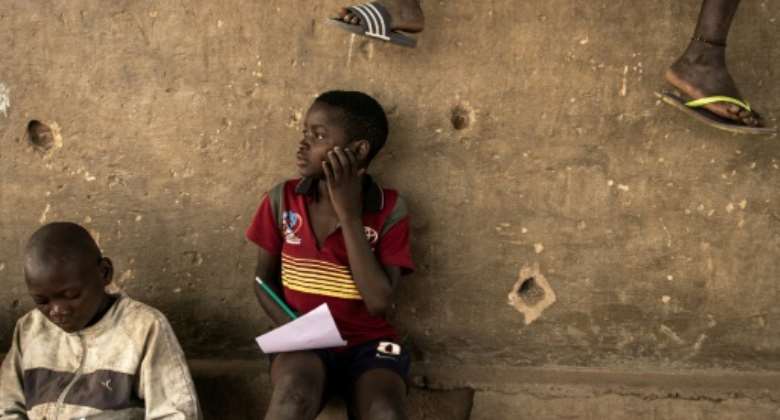 A young boy at a camp for internally displaced people in Metuge, northern Mozambique. By JOHN WESSELS (AFP/File)

Government forces have rescued abducted children who were forcefully recruited by the Al-Shabab jihadist group in northern Mozambique, the United Nations said Tuesday.

The UN Children's Fund (UNICEF) could not give further details on the numbers of youngsters involved, for fear of jeopardising efforts to liberate more children.

"Children have been rescued, not released" by the militants, UNICEF spokesman James Elder told reporters in Geneva.

They were saved by "government forces," he said.

The Islamic State-linked Al-Shabab has been terrorising the southeast African country's gas-rich Cabo Delgado region since 2017, raiding villages and towns in a bid to establish a caliphate.

The insurgency has grown bolder, with attacks including a coordinated raid on Palma in March 2021 that left dozens dead and displaced thousands.

Last week Human Rights Watch said Al-Shabab had kidnapped hundreds of boys in the northeastern region and forced them to join their ranks as child soldiers.

"There are thousands of children who have been displaced" since the March attacks, Elder said.

"In those areas... we consider thousands of children to be at risk and certainly no children so far have been released.

"I'd like to give you more details on any children rescued, but of course we don't want to endanger any ongoing negotiations."

Elder said that as humanitarian access to Cabo Delgado began to improve, there were increasing reports of abductions and the use of children in armed groups.

He said UNICEF had certain evidence of sexual violence against girls and forced marriages of girls.

Elder said video material secured by armed forces in an abandoned training camp -- which UNICEF has not yet been able to verify -- appears to show abducted children as young as five "handling weapons and being indoctrinated to fight".

Other recent reports of abductions left "little doubt that children are being forcefully recruited by this non-state armed group," he said.

"All feasible measures should be taken to ensure that children are demobilised, disengaged, or otherwise released, and provided with all appropriate protection services for their social reintegration."

Children associated with armed groups are primarily treated as survivors of violations under international legal standards.

UNICEF said it was working with the Mozambican government to support the physical and mental health of rescued soldiers and aid their safe reintegration into their communities.

The UN agency has also been training the Mozambican forces in what to do should they encounter children with armed groups.

The insurgency has killed more than 3,300 people -- half of them civilians -- and displaced at least 800,000 from their homes over the past four years.

In July, Rwanda sent 1,000 troops to help Mozambique and several of the country's neighbours, led by South Africa, have followed suit.