By Delil Souleiman with Maher al-Mounes in Damascus
Africa 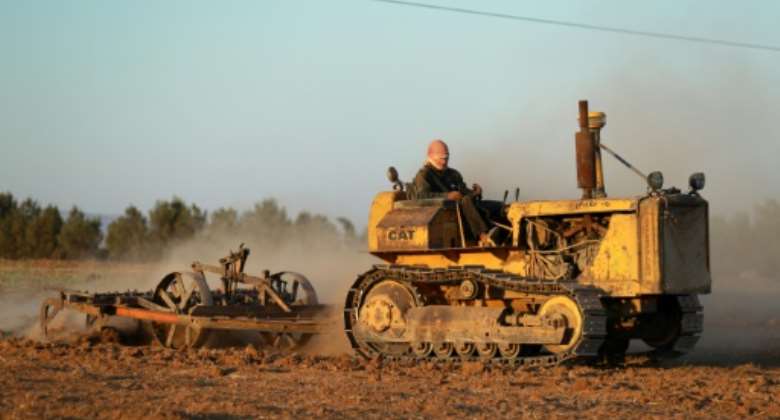 A farmer ploughs a wheat field in the northeastern Kurdish-held city of Qamishli, part of the Syria's breadbasket region of Hasakeh which has been hit hard by low rainfall. By Delil SOULEIMAN (AFP)

After Syrian farmer Abdelbaqi Souleiman lost his last wheat crop to a wildfire, he had hoped for a better harvest this summer. But this spring there was hardly any rain.

"Last year the field I planted was burnt to the ground," said the 48-year-old.

"This year there wasn't enough rain, and we didn't harvest any wheat."

As man-made climate change increases the likelihood of drought and wildfires worldwide, Syria has also been hit hard by low rainfall this year, especially in its breadbasket Hasakeh province.

In the Kurdish-run northeastern region, dismal wheat harvests have raised alarm about food security in a war-torn country where 60 percent of people already struggle to buy food.

In Hasakeh, humanitarian agencies estimate crop production to have dropped by more than 95 percent compared to last year in large parts of the province.

Aid agencies estimate that crop production has dropped by 95 percent in parts of Hasakeh region, compared to last year raising alarm about food security in war-torn Syria where 60 percent of people already struggle to buy food. By Delil SOULEIMAN (AFP)

Souleiman said the lack of downpour, coupled with the high price of fuel for irrigation, seeds and fertiliser, had made growing the rain-fed cereal a near mission impossible.

"At this rate, we'll have to stop growing wheat," he said in the village of Tal Shaeer.

"Farmers are going to have to start planting herbs like coriander and cumin because it's cheaper and they sell for more."

Outside the town of Qahtaniyah in the same province, Hajji Mohammed, 71, said he and his neighbours had also fallen on rough times.

"Farming has become a loss-making business," said the agricultural worker of 45 years in the village of Kardeem Haleema.

"If there's no rain this year, most people will move away."

Syrian farmer Dakhil Mohammed says 'farming has become a loss-making business' and warns his family is already selling their women's gold and furnishings to buy seeds for next year. By Delil SOULEIMAN (AFP)

After years of losses, the family had next to no resources left with which to launch into another season.

"We're trying to sell our women's gold or furnishings so we can buy the seeds," he said.

Before the war erupted in 2011, Syria produced up to 4 million tonnes of wheat a year -- enough to feed its entire population, but harvests have since plunged to record lows, increasing dependence on imports.

The agriculture minister in Damascus said last month the country produced 900,000 tonnes of the grain this year, less than half of the two million tonnes needed.

Salman Barodo, co-president of the economy and agriculture commission with the Kurdish authorities, said this year's harvest had fallen far short of demand for the region's bakeries.

"In previous years, we'd reap more than 600,000 tonnes of wheat," he said. It was enough for flour, seeds for the following season, and a little left over in reserve.

The poor harvest comes as the whole of northeast Syria is already facing a humanitarian disaster this year, aid agencies have warned, as low rainfall has also drastically depleted water levels along the Euphrates river.

This has threatened electricity production and drinking water supplies, and complicated access to the river for irrigation.

Depleted water levels along the Euphrates due to lower rainfalls have also threatened water supplies for irrigation, and grain silos in Syria's northeastern city of Hasakeh are already running low. By Delil SOULEIMAN (AFP)

In the neighbouring province of Raqa, 42-year-old wheat farmer Ahmed al-Humaidi said he had briefly considered switching to irrigation to save his crop.

"We thought of drawing water from the Euphrates... but we were not able to because of the high cost" of equipment and fuel, he said in the village of Salhabiyah.

Mike Robson, the representative of the Food and Agriculture Organisation in Syria, said the rainy season ended unusually early in March this year.

High temperatures the following month then prevented the grains from filling out properly.

"We don't yet have the full final numbers for the harvest for this year, but we're expecting it to be very low -- possibly about half the figure for last year," he said.

This would likely mean more price hikes, and more families struggling to feed themselves.

Already, the World Food Programme said in February that a staggering 12.4 million people in Syria -- out of an estimated population of 20 million -- were food insecure.