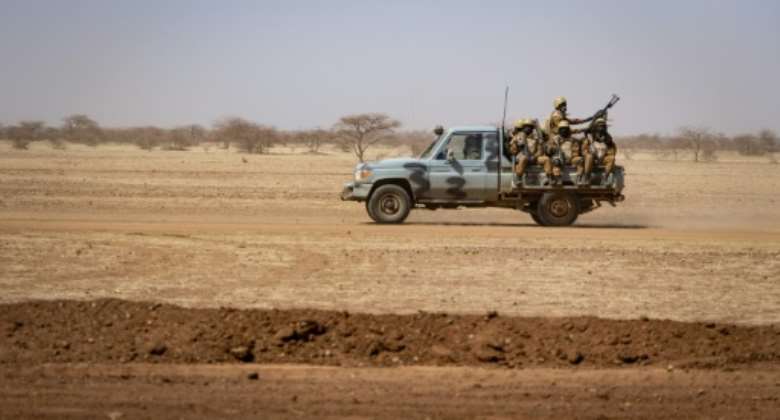 Burkina Faso has been plagued by regular, deadly jihadist attacks since 2015, mostly in the northern and eastern regions. By OLYMPIA DE MAISMONT (AFP/File)

Suspected jihadists killed 14 soldiers in an attack in northern Burkina Faso on Monday, the defence ministry said, in the latest bloodshed to hit the region plagued by Islamist violence.

"The military detachment of Yirgou" in the Centre-Nord region's Barsalogho department was "the target of a terrorist attack" around 0500 GMT on Monday, junior defence minister General Aime Barthelemy Simpore said.

"Fourteen soldiers were killed during the fighting and seven wounded were evacuated," he said in a statement, with the death toll higher than the nine given earlier by security sources.

"Several terrorists were neutralised during the response," he added, praising the soldiers' "great fighting spirit".

A ground and air counter-offensive was immediately launched to "neutralise the attackers," he added.

A map of Burkina Faso showing Barsalogho. By (AFP)

A security source told AFP that there was also an "enormous" amount of equipment lost, with some being burnt and some taken away by the attackers.

Burkina Faso has been regularly hit by deadly jihadist attacks since 2015, mostly in the northern and eastern regions close to the Mali and Niger borders.

But on Saturday it was the south that was hit, with two soldiers killed by a makeshift bomb in Larabin near the Ivory Coast border.

Back in the north, five soldiers were killed during a reconnaissance mission in Mentao last Wednesday, also by a makeshift bomb, the armed forces said.

Such attacks, normally blamed on jihadists groups affiliated to the Islamic State or Al-Qaeda, have killed around 2,000 people and forced more than 1.4 million to flee their homes.

Majority’s approval of 2022 budget is a show of middle finge...
3 minutes ago