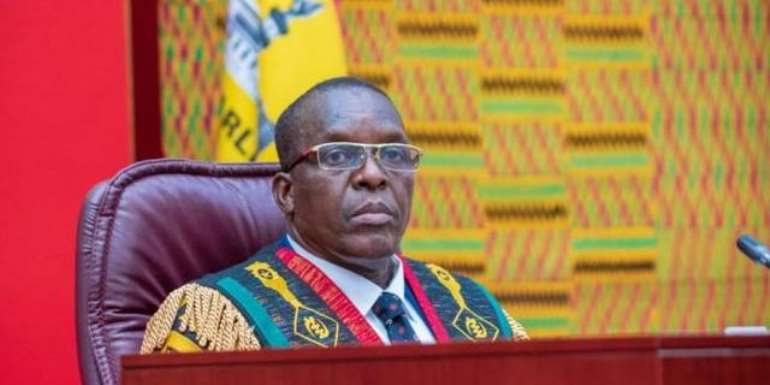 Since this is my first time in writing a letter to you, so please, Let me take this opportunity to express my felicitation to you for your election as the Honourable Speaker of the 8th Parliament of the 4th Republics of Ghana described, as a Hung parliament, the first in the history of Ghana, implying that the success of Ghana depends much on your wisdom especially how you judiciously navigate the affairs of parliament to the appreciation of both sides of the divide of the House.

Mr Speaker as you are aware, His Excellency President Nana Addo who quadrupled as the Head of State and Head of Government and Commander-in-Chief of the Armed Forces of Ghana has urged the citizenry to be patriotic citizens and not spectators, so in my capacity as a Senior citizen and most importantly as a former Senior Military officer that I humbly write this letter through you to the general public especially some security experts including the member of Parliament for Wa West Constituency (Hon Peter Toobu) and others to ensure that whenever the media as the Fourth Estate of the Realm, invites them to speak on national issues they must endeavour to support the media to properly educate the general public on national issues by speaking frankly and competently on the related matters. This is imperative for the understanding of the general public so that they are well informed and guided in order to ensure that the citizenry conduct themselves very well as part of the nation building effort in a democratic nation as enjoined by the 1992 Constitution.

Mr Speaker, Hon Peter Toobu as an Honuorable member of your august House that passes or makes the laws of Ghana must be seen educating the public on the 1992 Constitution/ laws of Ghana by upholding, preserving, protecting and defending the 1992 Constitution of Ghana at all times until it is amended appropriately by he and his colleagues in Parliament or by a referendum by the citizenry. Unfortunately, he joined the cacophony chorus when he failed to respond honestly and competently during a TV3 program on Saturday 02 October 2021 on some issues pertaining to the report of the Committee that looked into the recent disorder or disturbances in Ejura which some may termed it as riot or unrest, collectively embedded and guided as the insurrection Act or Law of Ghana. Thanks to the respected Moderator of the TV3 program who acknowledged the corrections by one of the co-panellist in the person of Hon Mr. Yaw Asamoah Buabeng that the Hon Ashanti Regional Minister did not err by deploying the military personnel to quell the riot or dispel an unlawful assembly beyond the scope of the Police.

As a Honourable Member of Parliament, who is a former Senior Police Officer, so the citizenry expects much from Hon Peter Toobu and other security experts in their comprehension of national security matters so that they inculcate patriotism into the citizens so that they do the right thing as expected of patriotic citizens. Hence, I humbly beg Hon Peter Toobu (my good brother) and other security experts to please speak honourably and competently on security matters.

Mr. Speaker, the Hon MP and the others failed to acknowledge that the three-member Ministerial Committee which was duly constituted by the Hon Minister of Interior which undertook the public inquiry into the circumstances that led to the death of two persons at Ejura was chaired by Justice George Kingsley Koomson, a highly respected Appeal Court Judge with other highly respected and competent citizens namely Dr Vladimir Antwi-Danso, a Security Expert, Ms Juliet A. Amoah, Executive Director of Penplusbytes and Ms Marie Louise Simmonds, a Principal State Attorney as the Secretary as members of the Committee, conducted the public inquiry in accordance with the provisions of the 1992 Constitution of Ghana and laws of Ghana. The Chairman and the members of his Committee, competently understood that the matter was a Constitutional/legal one and so they did very well by ensuring that the work of the Committee was guided by abiding with the 1992 Constitution and the laws of Ghana including Armed Forces Act, 1962 (Act 105) and not dictated by the poor knowledge of security experts.

Mr. Speaker as a very seasoned and highly respected lawyer who is the Speaker of the Parliament of Ghana and therefore fully aware that in the absence of both the President and the Vice President, the executive powers that would be conferred on you as the Commander-in-Chief of the Armed Forces of Ghana, as stipulated in the 1992 Constitution. Hence, I need not to bore you or draw your attention that the Ashanti Regional minister as the chairman of the Regional Security Council did the right thing by exercising the authority or powers of Delegated Officers as conferred on him by the 1992 Constitution when he ordered the Military to deploy the Soldiers to quell the recent riot at Ejura. The video on the scene of the incident was sufficient evidential material for the work of the Committee, hence the source of the Hon Minister’s intelligence was irrelevant.

Mr. Speaker, in Democratic Dispensation, civilian authority control of the gun of the State (armed state institutions) is imperative, hence article 57 (1) among others stipulates that the President is the Commander-in-chief of the Armed Forces of Ghana (note Armed Forces of Ghana in this context embraces all state armed security elements, hence elements of the Ghana Armed Forces, plus Armed Police and others).

Executive Authority is conferred on the President at Article 58 (1) of the 1992 Constitution which states that ‘The executive authority of Ghana shall vest in the President and shall be exercised in accordance with the provisions of this Constitution’’.

The Ashanti Regional Minister’s authority to deploy troops in Internal Security operations is granted at Article 58 (3), which stipulates that ‘Subject to the provisions of this Constitution, the functions conferred by Clause (1) of this Article to the President may be exercised by either directly or through Officers Subordinate to him. Hence, the Ashanti Regional Minister/chairman of the Regional Security council did perform a constitutional function or mandate on behalf of his Boss, the Commander-in-chief of the Armed Forces of Ghana by simply deploying the soldiers through the forum of the Regional Security Council.

Contrary to what some Ghanaians think that some of the provisions of the 1992 Constitution including the appointment of the Heads of the security institutions, the Chief Justices/Justice of the Supreme Court/Superior Courts and others were made by the Consultative Assembly and the Committee of Experts which drafted the 1992Constitution to satisfy the then Chairman of the PNDC, I wish to state clearly that it was not so and that the 1992 Constitution was the best one we the people of Ghana voted for at the beginning of the 4TH Republic because it took into consideration our History and it encompasses some provisions of previous Constitutions of Ghana and that of Democratic States like USA, Nigeria, India etc with the Presidential system of democratic Government as propounded by Charles Montesquieu in his doctrine of separation of powers.

Mr. Speaker, the Civilian authority control of the gun of the State (armed state institutions) is not negotiable in democratic dispensation. This is the main reason that the Head of State is the Commander-in-Chief of the Armed Forces and appoints the Chief of Defense Staff, the Service Commanders and the IGP etc of every Democratic State in the World especially the USA, India, Nigeria, Kenya, etc. This is not negotiable so Ghana has no option but to act competently as in modern Democratic Dispensation.

Mr. Speaker, I also wish to draw the attention of the general public of another important matter which some ignorant citizens castigated the Committee, for the reference to the military High Command the young Military Officer who commanded the troops deployed at Ejura for the necessary action (disciplinary action if any). The Committee did so because it acknowledged that the military is guided by the 1992 Constitution and Armed Forces Act, 1962 (Act 105) especially Part Two section 14 on the Code of Service Discipline and Offences by persons in command when in action.

The public must be made to understand that technically and legally the use of minimum force is permitted by Article 14 (2) of the 1992 Constitution/Laws of Ghana. The application and determination are guided by Principles of Use of Minimum Force (Force continuum or graduation). But the determination of use of minimum force is by the Officer on the ground and can only be reviewed by a court of competent jurisdiction hence the work of the Committee headed by a Seasoned High court Judge was guided by the Constitution/Laws of Ghana. It must be acknowledged that a threat to the life and safety of law enforcement officials must be seen as a threat to the stability of society as a whole, hence force maybe used and the use of force and fire arms by law enforcement officials should be commensurate with due respect for human rights. The use of force is governed by five Basic Principles, the most important are that it must be legal, reasonable and actually necessary to avoid an excessive force and medical support for casualties.

Mr. Speaker it may be distasteful with the provision of Article 13(2) of the 1992 Constitution which provides that: A person shall not be held to have deprived another person of his life in contravention of clause (1) of this article if that other person dies as the result of a lawful act of war or if that other person dies as a result of the use of force to such an extent as is reasonably justifiable in the particular circumstances of the following:

Hence, the use of force must be legally reasonable and actually necessary to avoid an excessive force complaint. Based on that, the Supreme Court of USA in 1989, gave a landmark ruling that force must be judged based on its objective reasonableness. In the determination of the "objective reasonableness" of force, the court set out a series of three factors: "the severity of the crime", "whether there is an immediate threat to the safety of officers or others", and "Whether the suspect is actively resisting arrest or evading etc.

The Supreme Court of USA, clearly ruled that force is justified only if the officer has probable cause to believe that the suspect or crowd poses a serious risk to the Officer or others that the objective reasonableness of the use of deadly force is based on the situation in which it was used. The reasonableness of a particular use of force is based on the totality of circumstances known by the officer at the time of the use of force and weighs the actions of the officer against the rights of the subject, in light of the circumstances surrounding the event. Hence, it must be judged from the perspective of a reasonable officer on the scene. The calculus of reasonableness must allow for the fact that police officers are often forced to make split-second decisions—in circumstances that are tense, uncertain, and dynamic and rapidly evolving—about the amount of force that is necessary in a particular situation. I wish to add that, it is Reasonable, if given the facts and circumstances observed by the officer on the ground at the time of the event, to effectively bring an incident under control.

Lastly, the reasonableness inquiry in an excessive-force case is an objective one: whether the officers’ and his squad actions are objectively reasonable in light of the facts and circumstances confronting them, without regard to their underlying intent or motivation.