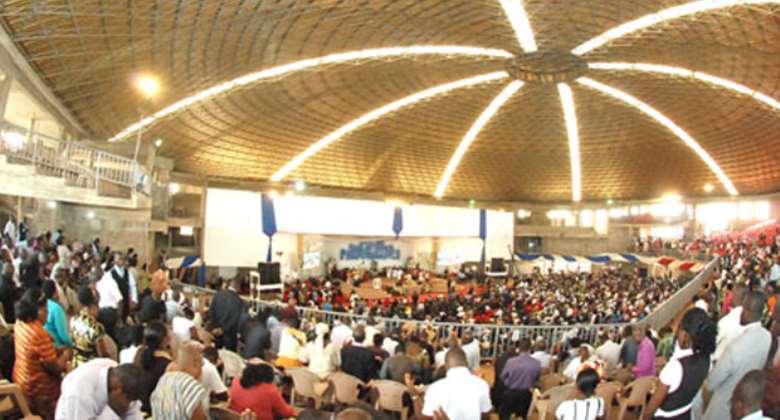 “They operate on the assumption that they are doing something, are part of something that has eternal value. They are different because the individuals in the organisation share in the common allegiance to a God who is there. Because they share this higher and common purpose, they assume a moral and ethical level which should always transcend their short-range goals.”

In her work, Yaa A. Akotia quotes Mpesha; Amoah and Gyimah as stating that the main object of the church has been the spiritual and moral development of its members. However, focus has been on the development of their mental, social and economic well-being. Consequently, a number of churches are embarking on developmental projects in their communities and even on a national scale.

She asserts that churches also invest in the educational and psychological needs of their members and the society at large. The church has hence gradually become a development partner in all societies. In order to undertake these activities, the church requires funds.

Consequently, the Pastor or church leadership teaches and encourages its members to give money often through tithes, offerings and special donations to fund church's programmes and activities. In both the Old and New Testaments of the Bible, there are instances where God commanded His servants to raise funds or the believers themselves willingly gave their resources to undertake God's projects.

Israel's leader and shepherd, Moses, comes to mind as one who sometimes asked the people to give. In Exodus chapter 25, God told Moses to tell the congregation of Israel to give offerings for His projects. Then, in Luke chapter 8, we read about some women making donations towards the ministry of Christ Jesus.

Organisations fail or succeed often based on the strengths and weaknesses of their finances. Since no organisation is set up with the objective of achieving failure in the short, medium or long term, but its success, the management of every organisation's finances is very crucial.

Richard Brealey defines financial management as “the process of putting the available funds to the best advantage from the long term point of view of business objectives”. But Baker and Powell also consider it that “at its core financial management deals with decisions involving raising and allocating funds in order to create value.”

The two scholars further posit that “financial management is an integrated business function, not as a stand-alone activity”. This means it works with other managerial departments such as Public Relations, Marketing, Human Resource, and Production within the organisation.

As indicated in the definitions above, financial management is a business function; it may also be referred to as an organisational function. But the key thing owned by organisations which needs to be effectively and efficiently managed is the finance. The Merriam Webster dictionary defines finance as “money or other liquid resource of a government, business, group or individual.”

Thus, C.R.K. Ahortor states that the concept of management presupposes that the item to manage, in this case funds, can deteriorate, devalue, become useless or depreciate. He also writes that the main aim of financial management at the organisational level is to achieve the various goals that an organisation sets for itself for a given time period.

Therefore, the lead Pastor having the oversight responsibility of the church must see to the proper mobilisation of financial resources and their utilisation to achieve the church's mission, vision and objectives underpinning its establishment.

In John 12: 6, we read about one of Jesus' 12 disciples, Judas Iscariot, who was said to be having charge of the moneybag and stealing part of the money given to him to keep. In other words, Judas Iscariot was a corrupt accounts officer or financial manager as he misappropriated church funds.

If Judas Iscariot who physically walked with Jesus Christ and heard Him teach with authority did not fear, but could be corrupt and mismanage church funds and eventually be implicated in a deadly financial scandal, then there is every reason to believe that financial mismanagement and stealing abound in today's churches.

The church has been described as the light of the world, salt of the world and glorified with other similar favourable attributes, yet it has often been plunged into financial scandals. In November 2008, a Pastor of the Heavens Gate Ministry in Ghana allegedly stole GHȼ7000, being the amount realised from a fundraising event organised by the church, and buried it in his compound.

Also, sometime in 2014, in the Bantama locality, an usher of a protestant church was caught stealing money from the offertory box when he was taking it to the account office for counting and recording. These confirm the prevalence of stealing of funds that occurs in churches, which sometimes end up being reported in the media throughout the world, thereby impugning the integrity of the church and ministers of the gospel.