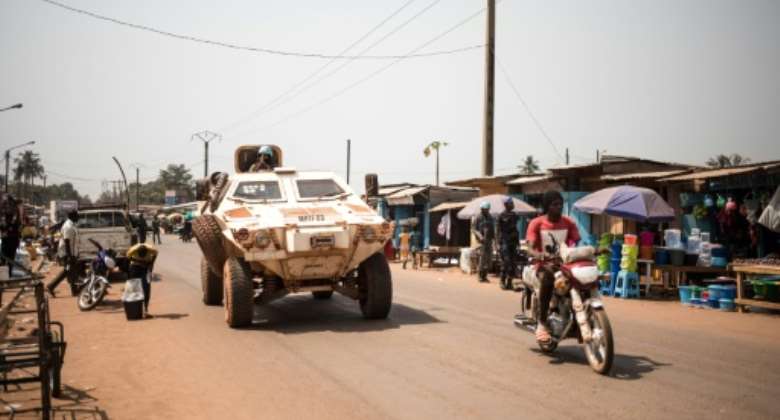 The Central African Republic on Friday acknowledged some of the abuses which the UN has said its army and its "Russian instructors" committed, but insisted that most of the blame lay with rebel fighters.

The Central African forces, supported by hundreds of Russian paramilitaries, have been conducting a vast counter-offensive against rebel groups since December 2020.

Government forces have also bolstered by a 12,000-strong UN peacekeeping force as well as hundreds of Russian and Rwandan paramilitaries.

UN experts in March expressed concerns over reports of "grave human rights abuses" in the country.

The UN recorded 526 violations and abuses of human rights over a year, which UN experts said caused at least 1,221 deaths, including 144 civilians.

"The people responsible for these incidents are divided into three categories, not including UN peacekeepers," Justice Minister Arnaud Djoubaye Abalene said on Friday.

While the country's security forces and their "Russian instructors" fill two of those categories, the rebels have been responsible for the majority, he said.

The UN report said its experts had "received, and continue to receive, reports of grave human rights abuses and violations of international humanitarian law, attributable to the private military personnel operating jointly with CAR's armed forces and in some instances UN peacekeepers", naming Russian companies.

The CAR defence minister presented to reporters a report by the enquiry commission ordered by President Faustin Archange Touadera after the UN report was released.

The report detailed crimes and abuses blamed on the rebels, but not on the Russian security forces and paramilitaries.

"Of the verified incidents, some are attributable to Russian instructors who are supporting the Central African Armed Forces" in the fight against the rebels of the Coalition of Patriots for Change (CPC), an alliance of rebel groups formed in December in an attempt to overthrow Touadera, the justice minister said.

When the UN report was published, the CAR government characterised the allegations as "mere denunciations".

Landlocked CAR is one of the world's poorest nations and has seen a string of coups and wars since it gained independence from France in 1960.

Moscow has officially acknowledged tha 1,135 Russian "non-armed instructors" are operating in the country, but NGOs on the ground say that some of these are from the private Russian security group Wagner, which Moscow denies.

The CAR has become a key area in the controversy over the role in Africa of the Wagner mercenary group which is allegedly run by the shadowy businessman Yevgeny Prigozhin, an ally of President Vladimir Putin.

Since the beginning of the year, CAR government forces, backed by the UN peacekeepers, Rwandan troops and Russian paramilitaries, have succeeded in recapturing from the rebels much of the two-thirds of the country which they controlled.

CAR is the second least-developed country in the world according to the UN and is still suffering from the aftermath of a brutal civil conflict that erupted in 2013.

It has been wracked by coups and decades of misrule by dictators since its 1960 independence from France.

Touadera was re-elected as president in December on a turnout of fewer than one in three voters.

The ballot was hampered by armed groups -- including the 3R -- that at the time controlled around two-thirds of the country, and rebels mounted an offensive in the runup to polling day.