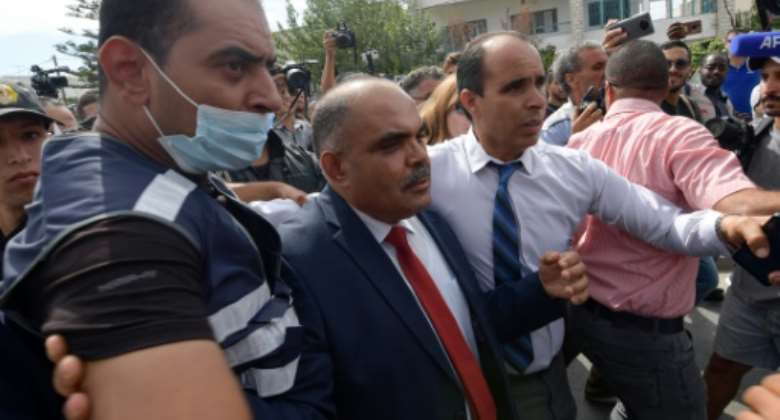 Tunisian Security forces shield Ennahdha MP Mohamed Goumani from angry protesters as he tries to enter parliament which the president suspended in a July power grab. By FETHI BELAID (AFP)

Security forces deployed heavily around Tunisia's parliament on Friday to block MPs demanding access to the legislature, whose activities were suspended by President Kais Saied in July.

More than 80 deputies, mostly from the Islamist-inspired Ennahdha party and its ally Qalb Tounes, had called for members of the 217-seat assembly to gather outside and demand it be reopened.

Saied on July 25 suspended the legislature, sacked the government and seized control of the judiciary, later moving to rule by decree.

On Wednesday he appointed geologist Najla Bouden to form a government, which Saied himself will technically head under measures he announced last week.

Parliament remains frozen and its members stripped of their immunity, salaries and other privileges.

Yet despite dozens of MPs joining calls for a gathering to demand entry to parliament, AFP reporters only saw one.

"As a member of parliament, I've come to resume my work at parliament, but I found the doors closed, said Mohamed Goumani from Ennahdha.

Supporters of Saied accosted him as plain clothed police looked on.

"Resign! Why did you come to parliament? You've already been here for 10 years! You don't have any shame," said a man in his 70s.

Supporters and opponents of Saied are both planning demonstrations in the capital on Sunday.

FIFA throws out SAFA’s protest case against Ghana after WC q...
50 minutes ago

Appropriate adequate funds for establishment of Ghana’s CDC ...
56 minutes ago