Thousands rally in Sudan capital in support of civilian rule 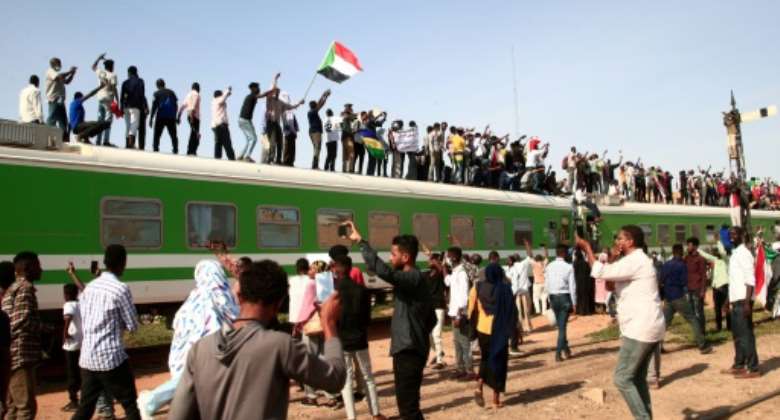 Sudanese protesters in Khartoum greet fellow demonstrators upon their arrival on a train from Madani, the capital of Al-Jazirah state, to join a rally in support of a civilian-led transition to democracy, on September 30, 2021. By Ebrahim HAMID (AFP)

Thousands of Sudanese protesters flooded the streets of Khartoum on Thursday in support of civilian rule, more than a week after a coup bid involving military officers, witnesses said.

Sudan has been led by a civilian-military administration under an August 2019 power-sharing agreement signed after the army ousted long-time autocrat Omar al-Bashir in April that year following mass protests against his rule.

Many of Thursday's protesters arrived in Khartoum by train from other areas, an AFP correspondent said.

Some threw rocks at security forces who fired tear gas to disperse the demonstrators who were chanting "civilian".

"The main goal of our revolution has been a civilian government and a democratic country, and we will not back away from this," one of the protesters, Salima Youssef, told AFP.

Witnesses said the demonstration was organised to support the civilian-military Sovereign Council against any bid to overthrow it.

Sudan's government said it thwarted a September 21 coup attempt involving military officers and civilians linked to the regime of imprisoned Bashir. At least 11 officers were among those arrested.

According to civilian Prime Minister Abdalla Hamdok "extensive preparations" had preceded the coup attempt, including unrest in the impoverished east where anti-government protests in late September shut down oil pipelines and the main port.

Hamdok has also called for reforms within the army, a highly sensitive issue in Sudan.

A transition to full civilian rule has remained shaky, reeling from deep fragmentation among political factions, economic woes and a receding role for civilian leaders.

Park your car if you don't want to be vaccinated — Dr John N...
53 minutes ago