Do you know why Nana Ampadu was called Nwomtofoɔhene (King of musicians)? 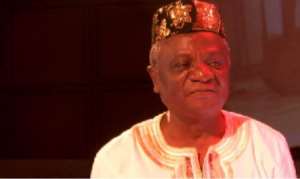 A readily answer one will give to this headline, especially true music fans, can be: because the legend released more songs than any musician Ghana knows, if not even unmatched in the music world with his more than eight hundred hit songs.

That can't be far from the truth. But, indeed, the man we're talking about here, it'll be understatement to just call him a legend because of number of songs he released.

Nana Kwame Ampadu was a storyteller, a philosopher at that. And you'll play and replay his records if you owned one. His storylines spoke to every aspect of our lives.

As beautiful as he's been described of his lyrical prowess with that scintillating voice of his, that's not what won the highlife maestro the enviable title: Nwomtofoɔhene (which is literally translated as King of Musicians).

Indeed, if Nana Ampadu composed his music in international languages like English and French, the international fame he would have gained will mean Grammies was a small stage to award him.

When you're in a partying mood you'll have readily compositions from this giant of the entertainment industry. And in mourning black clothes or wooing a damsel to adorn a white wedding robes, Nwomtofoɔhene will have available dozens of fitting masterclass vocals to gift you on the go.

Nana Ampadu is not only a national asset. And he does not only deserve a national funeral, or having monuments named after him, or any glories of perishable possibilities.

Nana is an institution, a school of higher learning with vast vaults of knowledge that need not be buried with him.

His demise on the 28th of September, 2021, is a big blow that'll leave a lasting injury in the body of Ghana music.

Ghana needed a King of Music, and the one who qualifies to wear the crown must possess a tongue that compose vocals that connects with the heartbeat of the country.

A composition that'll give hope to the hopeless, and voice to the voiceless.

It was at the time freedom of speech was muzzled by authoritarian military regime, National Liberation Council (NLC).

Amplifying the muted grievances of the shrunk populace owing to possible ramifications in witch-hunting, Nana Ampadu, like George Orwell the author of widely read Animal Farm, narrated in a song about a gathering of animals in a jungle. And a hapless deer got a seat in front of the leopard. When the deer signalled to express his views, the oppressive beast in the leopard pinned down the meek animal with his paws.

Fearing danger ahead, the deer petitioned the gathering to be suspended, since not all the animals got a comfortable seating.

The other animals who saw what evil the leopard played the deer agreed for the dismissal of the meeting.

The deer enjoyed his freedom and comfort thereafter.

By inference, the military junta, the NLC, saw this composition as a direct insinuation to its highhandedness of dissenting views to the regime, and Nana Ampadu's song was banned from airplay or discs sold, to stem the possible disaffection the lyrics will generate.

This was in 1967, and it was after the ouster of the NLC in 1973 that Nana's song was played uncensored. And it was this same song, named in Twi as _Obi te yie obi nnte yie_ (some are comfortable whiles others are not) that won Nana Kwame Ampadu the King of Musicians (Nwomtofoɔhene).

Nana Ampadu is beyond a legendary status.

My native Goka people say: _"if a man die and his tongue will not rot, it'll depend on the living"._

We the living today owe a lot of gratitude to Nwomtofoɔhene, and in letters of gold should we inscribe his beautiful name to immortalise his legacy.

Representing Global Net Think Tank, we propose not only a school should be built in Nana Ampadu's name, or a library that will store pristine his works for today and posterity; but the King of Music should be a subject, a course that should be taught in our schools from the basic level to tertiary.