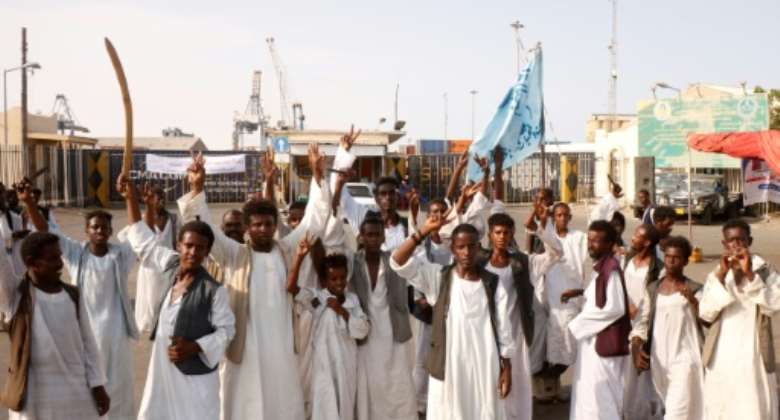 Last year's landmark peace deal between the Sudanese government and western and southern rebels has triggered unrest in the east, where vital exports from Port Sudan were briefly halted in September. By Ibrahim ISHAQ (AFP/File)

When Sudan signed a historic peace deal last year, it was hoped it would end decades of war in the west and south -- but instead it sparked unrest in the east.

Some in the gold-rich but impoverished east felt the October 2020 deal with a coalition of rebels, from the western Darfur region and two southern states, had left them out.

This month, furious anti-government protests shut down oil pipelines and the main port.

The eastern region, which includes Sudan's Red Sea coast, has been politically and economically marginalised for decades -- and was itself the scene of a decade-long rebellion.

"Since Sudan gained independence and this area has suffered economic and political marginalisation," , said Sudanese analyst Amir Babiker. "The peace deal just sparked it up again."

Babiker warned the deal had "sent a negative message" to the multi-ethnic region, where many complain too many top jobs go to the Khartoum elite.

On September 17, a protest leader announced that dozens of demonstrators, objecting to parts of the peace deal, had blocked the country's main container and oil export terminals in Port Sudan.

It crippled Sudan's own exports and also blocked the 154,000 barrels of oil per day pumped from neighbouring South Sudan -- for which Khartoum earns lucrative transit fees that are an important source of revenue for the cash-strapped government.

Ten days later, after Oil Minister Gadein Ali Obeid warned of "an extremely grave situation" with pipelines blocked, the government struck an agreement on Sunday for exports to resume -- but protests have continued elsewhere.

"The neglect of the east Sudan region has been endemic for decades," said Sayed Abuamnah, a protest leader. "Our demands have been ignored since independence."

With a Red Sea coastline more than 700 kilometres (400 miles) long and bordering regional players Egypt, Ethiopia and Eritrea, the region comprises the three states of Red Sea, Kassala and Gedaref.

The region's Beja Congress, named after its largest ethnic group, and the Rashaida Free Lions, named after an Arab tribe, took up arms against Khartoum in 1994, protesting an unfair national distribution of wealth and power.

After years of low-level insurgency, a 2006 peace deal promised government jobs and vast sums for development, and rebels put down their arms.

But little in practice changed, and the east remains one of the poorest regions of Sudan.

"This is a very old crisis that began before the peace accords," Babiker said.

When Sudan's long-time hardline ruler Omar al-Bashir was ousted in April 2019, some in the east hoped the situation would change.

But when the transitional government agreed a peace deal with the Sudan Revolutionary Front (SRF)-- a coalition of rebel groups and political movements from Darfur in the west and the "Two Areas", the southern states of South Kordofan and Blue Nile -- some in the east felt left out.

"The deal... provoked hostile reactions in other parts of the country, where some feel that it gives too much prominence and offers disproportionately large dividends to Darfur and the Two Areas," the International Crisis Group warned earlier this year.

The SRF included members from east Sudan, such as Osama Said, from the Beja Congress, who insisted the peace deal had benefited the region.

"Until now, Khartoum considered that there was no dispute with the east and therefore nothing to negotiate," Said told AFP.

But protesters said those who signed the deal did not speak for them.

"People who did not represent the region are the ones who signed with the government," Abuamnah said.

In the past year, east Sudan has experienced several violent clashes between rival ethnic groups jockeying for political posts.

For the transitional government in Khartoum, which took power after the ouster of Bashir -- and which shook off a failed coup earlier this month -- the troubled east adds to its woes.

While Khartoum has made a deal with protesters for the oil to flow and port to operate, many fear that without fundamental changes, more problems may follow.

"The rest of the shutdown is ongoing until our demands are met," Abuamnah said.

'We will stand united to oppose e-levy' – Haruna Iddrisu but...
50 minutes ago