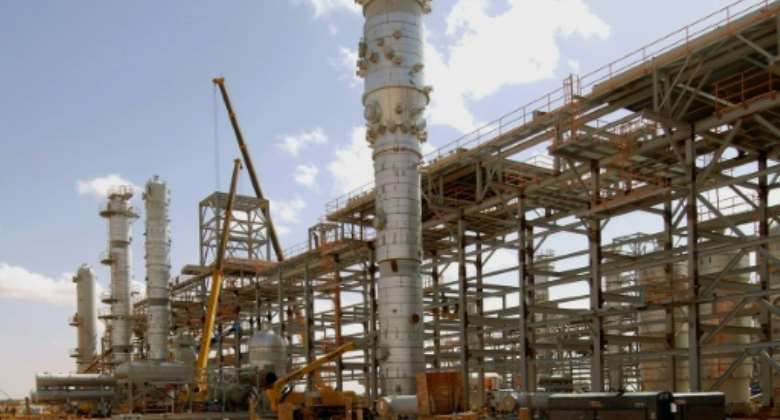 For a quarter of a century, gas from Algeria's vast southern desert has been transported to Spain and Portugal through Morocco but a deepening rift between the North African neighbours means the taps could soon be turned off. By KJETIL ALSVIK (STATOIL/AFP/File)

Algeria pumps huge volumes of gas through Morocco into Europe, but with Algiers and Rabat at loggerheads as a pipeline agreement nears expiry, experts say the taps could soon be turned off.

That would hit Spain's gas supplies just as prices soar across Europe and with winter approaching, and Foreign Minister Jose Manuel Albares was due in Algeria on Thursday to discuss the issue, his office told AFP.

But the GME contract is due to expire at the end of October -- just over two months after Algiers severed diplomatic ties with Rabat over "hostile actions".

And in August, Energy Minister Mohamed Arkab told Spanish ambassador Fernando Moran that Algeria was ready to deliver all its Spain-bound gas exports via an alternative undersea pipeline, bypassing Morocco.

"In light of the lack of diplomatic channels between Rabat and Algiers, it's difficult to see any pathway for negotiations."

Unlike their border, closed since 1994, the GME pipeline has stayed open for a quarter of a century, despite repeated crises.

In return, Algeria gets a cost-effective route for around half of its piped gas exports to Spanish and Portugese markets.

Yet with another diplomatic spat flaring just as the contract expires, a new deal is far from certain.

The latest crisis followed months of tensions, partly over Morocco's normalisation of ties with Israel in exchange for Washington recognising Rabat's sovereignty over Western Sahara.

Algiers, which has hosted the Polisario independence movement and supported the Palestinian cause, in August accused its neighbour of "hostile actions", including complicity in deadly forest fires, backing separatists in the Kabylie region and using Pegasus spyware against Algerian officials.

Morocco called the Algerian move "completely unjustified", but experts say Algeria is keen to hit its rival where it hurts -- in the pocket.

"Algeria could deprive Morocco of transit fees, which are a major and stable source of revenue, but also of gas supplies at a good price," said North Africa energy expert Roger Carvalho.

But, he added: "Algeria has obligations (towards Spain and Portugal) and can't deprive itself of international revenues from these contracts. So it has to find another delivery route."

Algeria does have two alternatives to the GME, but both have shortcomings.

The Medgaz undersea pipeline, which transports Algerian gas directly to Spanish shores, is already operating near its full capacity of 8 bcm per year -- around half total Algerian gas exports to Spain.

"If the Algerians manage to deliver enough gas via Medgaz, they probably will," Carvalho said.

But while Algeria's state energy firm Sonatrach and its Spanish partner Naturgy have vowed to boost Medgaz's capacity to 10 bcm per year in the coming months, that still falls far short of the total needed at current levels.

The second option is liquefying the gas and sending it to Spain by ship.

But Porter says the short distance means this option "does not make financial sense".

As a result, "Algeria is potentially going to lose some gas export sales revenue in order to deprive Morocco of its primary (97 percent) source of natural gas," he told AFP.

The Moroccan energy expert told AFP that closing the pipeline would hurt Algeria but have only "marginal" impact on Morocco.

"The GME is an opportunity for the Algerians. If they passed it up, it would be an irrational decision and they would be the biggest losers," he said.

Porter says that could force Morocco, which uses GME gas to generate around 10 percent of its electricity, to boost coal imports to cover the shortfall.

Rabat has said it wants to keep the GME open. But notwithstanding a deal directly between the firms managing the contract, many analysts are betting the taps will be turned off.

Matthew Cunningham, an economist at Barcelona-based consultancy FocusEconomics, said that would cause considerable supply disruptions for Spain, which has already been pushed to lower electricity taxes and impose price caps as gas bills soar across Europe.

"Despite this, Spain should be able to satisfy its energy needs by obtaining natural gas from different places or by using other energy sources, even though costs will rise significantly," he said.

Spain's environment ministry told AFP this week that Algeria had given it "the necessary guarantees that gas imports from Algeria will not be jeopardised despite the current crisis".

But Carvalho warned that long term, closing the GME could push Spain and Portugal to diversify their supplies away from Algeria.

"Using gas deliveries as an economic weapon isn't a good calculation in the long term for Algeria," Carvalho said.

Park your car if you don't want to be vaccinated — Dr John N...
6 minutes ago