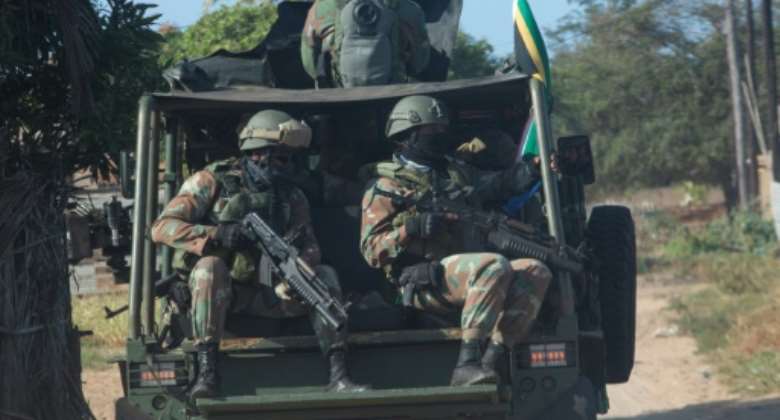 South African troops in Pemba. Mozambique's neighbours and Rwanda are providing military help in the fight against the jihadists. By Alfredo Zuniga (AFP)

Islamic State-linked militants leading an insurgency in northern Mozambique have kidnapped hundreds of boys and forced them to join their ranks as child soldiers, Human Rights Watch said Wednesday.

A jihadist group known locally as Al-Shabab has been terrorising Mozambique's gas-rich Cabo Delgado region since 2017, raiding villages and towns in a bid to establish a caliphate.

Local sources told Human Rights Watch (HRW) armed militants have been abducting hundreds of teenagers, some as young as 12, and taking them to training camps.

"We joined many other men and boys and were trained on how to use guns and knives to fight," said a young man who was captured in 2020 and taken to a camp in the town of Mbau, around 150 kilometres (93 miles) north of the provincial capital Pemba.

"They told us that we had to kill and fight for our land and to protect our religion," he said, living in fear since he managed to escape while on patrol duty.

That assault interrupted a nearby multi-billion-dollar gas project and prompted military deployments from African neighbours to support Mozambican troops.

Cabo Delgado and the city of Palma. By Kun TIAN (AFP)

One Palma resident said assailants kidnapped his 17-year-old son when they raided the town.

"I was on my knees begging [them] to take me instead," he said.

"One of the men hit my wife in the head with an AK-47 [assault rifle] to force her to release [our son]," he added.

The man's wife said she saw her son again two months after the attack, just before the family abandoned Palma.

"I was hiding inside the house when I heard his voice," she told HRW. "I saw him in a group of about a dozen other boys, all wearing camouflage trousers and a red band around the head."

In total, HRW spoke to four parents, an escapee and two witnesses. Their testimonies were published in a statement on Wednesday.

Mozambique's insurgency has killed more than 3,300 people -- half of them civilians -- and displaced at least 800,000 from their homes over the past four years.

The militants, which sometimes behead their victims, are also known to abduct women and children.