By Christoph Sperfeldt - The Conversation 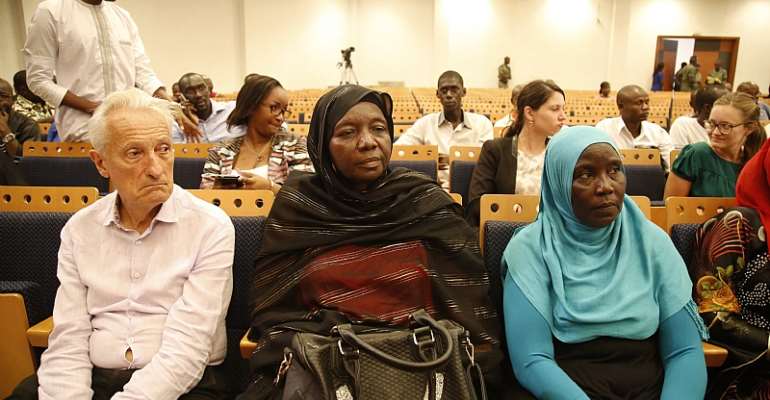 Relatives of the victims at Hissene Habre&#39;s 2015 trial in Dakar, Senegal - Source:

This is the question victims of the regime of former Chadian dictator Hissène Habré are facing.

Habré, who ruled Chad from 1982 to 1990, died in late August this year from COVID-19 complications while serving a life sentence in Senegal for war crimes and crimes against humanity. His prison sentence was delivered in 2016, by the Extraordinary African Chambers, a specialised criminal court set up in Dakar through an agreement between the Senegalese government and the African Union (AU). The Extraordinary African Chambers ceased its operations after completing appeals one year later.

The trial was the result of more than 25 years of persistent efforts by Chadian victim groups and their non governmental partners to bring Habré to justice. In addition, the Extraordinary African Chambers ordered Habré to pay over CFA 82 billion (more than US$ 140 million) to 7,396 victims who had participated in the trial as civil parties. This remains the largest amount of compensation awarded by an international(-ised) criminal court.

Yet, more than four years after the order, none of the victims had received any compensation.

The Extraordinary African Chambers appeals judges had ordered the reparations to be implemented through a “victims' compensation fund” similar to a model that exists at the International Criminal Court and its Trust Fund for Victims . But now Habré is dead, and the fund still only exists on paper.

Victims in Chad are frustrated with the slow progress and have frequently organised marches and demonstrations. The UN High Commissioner for Human Rights stressed that Habré's death in no way constitutes an obstacle to the implementation of the fund and the Extraordinary African Chambers's compensation order.

Attention has shifted to the AU and the Chadian government to come to an agreement to bring the fund into existence and start compensating victims. Action is needed, if the court's order is not to turn into a fictitious award.

How it was meant to work

The Extraordinary African Chambers appeals judges provided the fund with great discretion in executing the reparations order. It included the possibility to engage with other victims beyond the civil parties and collaborate with Chad and victim associations on conceiving collective reparations not ordered by the court.

In addition, the fund was made the repository for the proceeds of property seized from Habré. It was also instructed to monitor Habré's financial situation with a view to identifying and seizing additional assets.

The Extraordinary African Chamber's appeals judgement had made the fund central to the implementation of reparations.

This was a risky strategy. It put all hope into a new institution yet to become operational.

The fund was eventually established under the auspices of the AU, following a resolution in July 2016 and the adoption of the fund's statute in early 2018.

However, it took until June 2019 before reaching an agreement with Chad for the establishment of the fund's headquarter in N'Djamena. Then the COVID-19 pandemic hit, and things were brought to a standstill.

The next challenges are to get the fund operational and mobilise resources. Following an AU mission to Chad, in mid-September 2021, there are hopes that a Board of Directors with members from the AU, the Chadian government and the three victims associations will soon resume its function. The statute also foresees a secretariat to assist the Board with its mandate.

More difficult will be to actually mobilise the funds for compensation. The Extraordinary African Chambers had seized assets belonging to Habré. These consists of one property with villa in Dakar (with a reported estimated value of almost US$800,000) and two bank accounts.

Yet, action is needed to convert the protective seizure into monetary benefit for the victims. Victim lawyers have so far not brought any action before the High Court in Dakar, which was designated by the Extraordinary African Chambers to hear any matters after its closure. Presumably because they were waiting for the fund's establishment, which is to receive the proceeds.

Accessing Habré's alleged assets beyond Senegal's borders will be more tricky still, more so after his death. A Chadian commission of inquiry claimed in 1992 that Habré stole CFA 3.32 billion (US$ 5.7 million) from the national treasury.

One thing is clear: Habré's assets alone will come nowhere near to satisfying the Extraordinary African Chambers' significant reparations order. The AU has allocated US$ 5 million to the fund, presumably also for its initial operating costs. Moreover, it was reported that the Extraordinary African Chambers had transferred almost EUR 500,000 (US$ 585,000) to the fund, which remained in their accounts at the time of its dissolution. The AU has also announced plans to convene a resource mobilisation conference, involving member and partner states, international organisations and other entities, to solicit voluntary contributions to the fund.

A key role will fall to the Chadian government. While Chad had supported the Extraordinary African Chambers, it has so far done little to fulfil its own obligations to compensate the victims of the Habré regime.

In 2015, a Chadian court convicted a number of former security agents of the regime and ordered payment of CFA 75 billion (US$ 135 million) to around 7,000 civil parties, stipulating that 50% be carried by the Chadian state.

The court also ordered that a memorial be established for those who were killed and that the former security police premises be turned into a museum.

The Chadian authorities have failed to implement any of these measures.

The case highlights that Chad's role is not only to facilitate Extraordinary African Chambers reparations in concert with the AU, but also to acknowledge and bear its own responsibility for the violations committed by its state agents.

Recent unrest in Chad and the death of President Idris Déby Itno in April have directed much needed attention further away from reparations.

There are fears that the reparations process will turn into another lengthy effort that could rival the decade-long odyssey that was required to prosecute Habré.

For the victims, the clock is ticking – hundreds of mostly elderly civil parties are already dead and will never see the compensation they were owed.

Christoph Sperfeldt does not work for, consult, own shares in or receive funding from any company or organization that would benefit from this article, and has disclosed no relevant affiliations beyond their academic appointment.