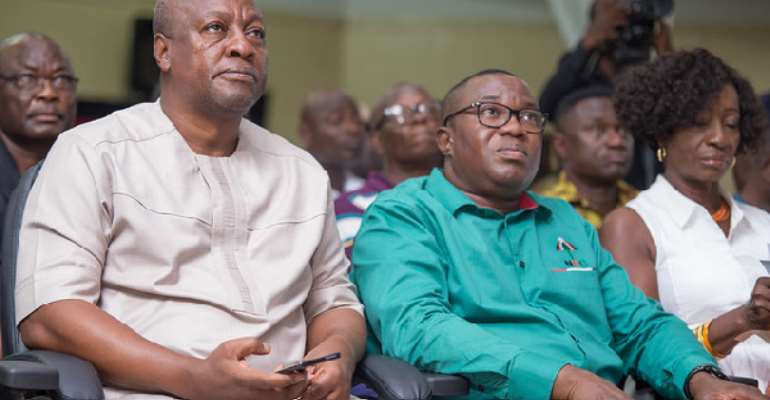 The National Democratic Congress (NDC) has rubbished claims that John Dramani Mahama and Samuel Ofosu Ampofo are complicit in the Takoradi kidnapping conspiracy.

At a press conference in Accra on Sunday, the Fixing The Country Movement noted that the Takoradi kidnapping incident and several others have come on the back of the tape of the National Chairman of the NDC where he allegedly heard plotting to make the country ungovernable for the NPP.

“Isn’t it interesting to note that these occurrences are happening in a fashion akin to the directives contained in the Ofosu Ampofo tape? The Fixing The Country Movement is not unaware of the political machinations of the NDC and how they are desperate to plunge this country into chaos.

“It is quite clear that this is the handiwork of those who are desperate for power and will do and employ any tactic fair or foul to achieve their selfish ambition. And this their latest shenanigan has backfired… As a matter of fact, we have been told by former NDC Flagbearer aspirant, Stephen Atubiga that the lady in the centre of this fraudulent hoax is a member of the NDC,” Ernest Owusu Bempah who is the convener for the Fixing The Country movement said at the press conference.

Having created the impression that Mahama and Ofosu Ampofo may be behind the Takoradi kidnapping, he further urged the security agencies to cast its net wider in the ongoing investigations.

Reacting to the allegations in a statement today, the NDC says not only are the claims of Owusu Bempah baseless, but also wicked, malicious and contemptuous.

“Neither the highly respected former President, H.E. John Dramani Mahama, nor its esteemed National Chairman, Hon. Samuel Ofosu-Ampofo, have any hand whatsoever in the happenings in the Western Region, nor are they linked in any way to any of the characters in that alleged kidnapping saga,” part of the NDC statement signed by the Director of Communications, Kakra Essamuah, has said.

It adds, “The Leadership of the NDC has far more noble objectives to engage its attention, and it is a sad reflection of the quality of our democracy that government agents would find time to vilify innocent persons just to make this hopeless administration look good in the eyes of the public.”

The NDC argues that it is just a tactic aimed at diverting attention from the pressures being mounted on the government over its poor handling of security issues in the country.

Hottest Photo Reports
Catch up with all the political quotes from our politicians.
Advertise here
More Headlines
ModernGhana Links
We Will Not Allow Anyone To Cheat Us In 2024 Elections — Mahama
Assemblies of God supports anti-LGBTQI+ Bill in a memo to Parliament
31.2km Assin Praso Assin Fosu road to be completed in November 2023
Your head should be properly examined if you think we'll sit down to be brutalised, murdered in 2024 elections again – Elvis Afriyie-Ankrah
Cape Coast Airport will be constructed at all cost - Akufo-Addo
‘We won but soldiers forced EC to declare results in NPP’s favour’ – Mahama
Komenda factory: "Mahama constructed the roof before building the foundation" - Akufo-Addo
Akufo-Addo commissions Engineering Workshops at Cape Coast Technical University
Komenda Sugar factory to be operational in 2022 — Akufo-Addo assures
TOP STORIES

Police to fight crime with dogs
39 minutes ago