Vote on breakaway region as Ethiopia faces tests to unity 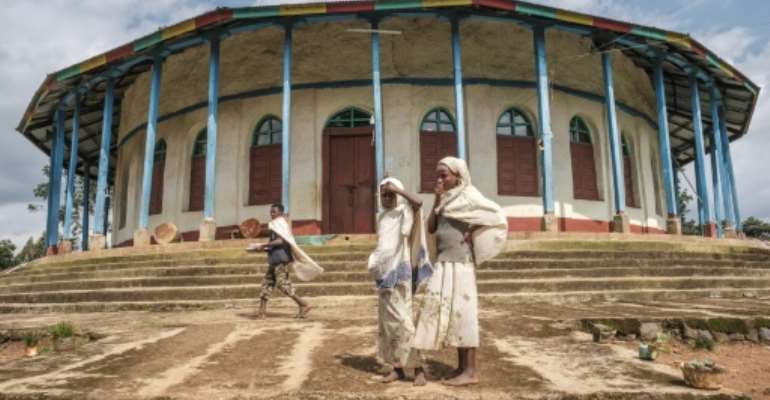 Ethiopian Orthodox devotees stand outside a church in Anderacha, once the site of a palace of the Kaffa kingdom near the town of Bonga in southern Ethiopia. By EDUARDO SOTERAS (AFP)

The hilltop bamboo palace in southwestern Ethiopia was once a formidable power base, where the now-defunct Kingdom of Kaffa hosted extravagant festivals and stored rich reserves of gold and buffalo hides.

These days, however, the royal family's descendants can scarcely pay for basic palace maintenance, while local administrators of what is now Kaffa zone complain they lack funds even for rudimentary roadworks.

The decline of Kaffa -- a storied forest realm once dubbed "Africa's Tibet" -- underscores what activists and politicians in Ethiopia's diverse southern region describe as more than a century of underinvestment by the authorities in Addis Ababa.

But Kaffa's leaders have a plan to fix it: A referendum scheduled for Thursday that, if successful, would carve out a new South West region -- Ethiopia's 11th -- and funnel more federal cash their way, along with control over how it is spent.

"In the rest of the country, everything is growing and changing. When I compare Kaffa with other places, it's still backwards," said Girma Kidane Gallito, grandson of the last king of Kaffa, who was deposed in the late 19th century.

"There are houses that haven't changed and there are roads that have not been improved" since that time, he told AFP, explaining why the referendum was necessary.

Since Ethiopia's Prime Minister Abiy Ahmed took office in 2018, similar efforts to create new regions in the south have spurred protests and bloodshed.

If Thursday's referendum is successful, it will carve out a new South West region. By EDUARDO SOTERAS (AFP)

The tensions show how challenges to national unity go well beyond the 10-month-old war in northern Ethiopia against rebels from the Tigray region.

Abiy is also contending with insurgents in the largest region Oromia and opposition politicians who dispute the credibility of his landslide election win this year.

Yet officials in Kaffa are optimistic Thursday's vote will go smoothly, allowing Abiy to shore up much-needed public support during a turbulent period.

The debate over how best to administer the south has been shaped by the same actors fighting it out in the north.

There is little doubt the proposal to create a new South West region will receive overwhelming backing from the nearly 900,000 eligible voters . By EDUARDO SOTERAS (AFP)

The 1995 constitution required officials to organise a referendum for any ethnic group that wanted to form a new region, but the old government, headed by the Tigray People's Liberation Front (TPLF), quashed such efforts, sometimes violently.

Map of Ethiopia and its current regions. By Simon MALFATTO (AFP)

Before long, more than 10 ethnic groups had asked to hold votes to break away from SNNP, threatening to destabilise a swathe of territory that borders Kenya and South Sudan and is home to roughly a fifth of Ethiopia's 110 million people.

Clashes in July 2019 between security forces and protesters in the region's Sidama zone killed at least 18 people, though a referendum went ahead there later that year, making Sidama Ethiopia's 10th region.

A breakaway bid by ethnic Wolaita leaders, however, has stalled, and crackdowns there have left an untold number of protesters dead.

In Kaffa, the push to form a new region has so far been peaceful.

Abiy himself visited Bonga, the zone's main town, in 2019, addressing a crowd of thousands while wearing a white blazer bearing the traditional Kaffa colours of blue, red and green.

Signs promoting the referendum have appeared on the streets of Bonga. By EDUARDO SOTERAS (AFP)

Though he warned Kaffa leaders that forming a new region wouldn't magically address their development woes, a deal was soon reached to join Kaffa with five other administrative areas to form the new South West region.

There is little doubt the proposal will receive overwhelming backing from the nearly 900,000 eligible voters.

Abiy's outreach seems to have endeared him to the people of Bonga, where signs promoting the referendum feature six hands coming together in a circle.

The previous TPLF-led government "did not have any desire to answer any kind of freedom demand", said high school administrator Berhanu Woldie.

"For us it was a repressive regime, and they were not good leaders."

Abiy has leaned on that goodwill during the conflict in the north.

Eager to support the war effort, thousands of young men and women from Kaffa have enlisted, and residents have collected hundreds of oxen and sheep to send with them to the front, said Tekalign Haileyesus of the Kaffa zonal administration office.

Along with signs promoting the referendum, the streets of Bonga feature posters of Abiy and elite military units with slogans like "I am a soldier for my country."

Girma Kidane Gallito is the grandson of the last king of Kaffa. By EDUARDO SOTERAS (AFP)

But whether Abiy retains that support depends less on battlefield gains than on how the referendum is implemented, said Kulle Kursha, analyst and lecturer at Hawassa University in Sidama.

Setting up -- and financing -- a new administration is no small task, Kulle said.

"If basic infrastructure is installed and people's voices are heard, then there is no fear of disintegration," he said.

But if a successful autonomy bid doesn't translate into better lives for Kaffa's people, "then instability or crisis will come".