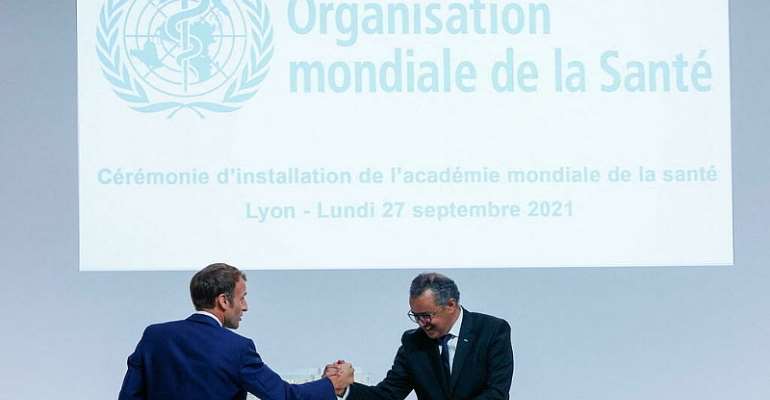 French President Emmanuel Macron and World Health Organization chief Tedros Adhanom Ghebreyesus have unveiled the WHO's global training centre in the southern city of Lyon. In the pipeline since 2019, the Covid-19 crisis has made it more necessary and relevant than ever.

"Investing in health systems is the best way to prepare for future pandemics," said Macron at the academy's launch ceremony in Lyon on Monday.

"What this crisis also teaches us is that we won't get out of a global pandemic if we don't have a global strategy," he added, pleading for solidarity between rich and poor countries.

Equipped with cutting-edge educational technologies such as artificial intelligence and virtual reality and a world-class health emergency simulation centre, the Lyon Academy aims to train millions of health workers worldwide, offering courses throughout their careers to keep them up to date with today's fast-changing environment.

Tedros stressed that the pandemic was "a powerful reminder of the value of health workers and why they need the latest information, skills and tools".

Most of the courses will be online – a dozen or so are already available – and when the premises open in early 2024 around 16,000 people will be able to attend face to face courses each year.

France and the WHO began discussing how to improve health training on an international level in 2019, not least to combat the shortage of health professionals especially in poorer countries. The WHO estimate as many as 20 million are lacking.

“One of the key challenges is to make sure people remain in the sector," said the academy's scientific coordinator  Dr François Dabis.

While he recognised that salaries were an issue, with health workers leaving their home countries in search of more attractive opportunities abroad, the academy still had an important role to play.

"By offering them training all through their lives we hope to improve their knowledge but also make their work seem more attractive, increase loyalty to their jobs," he told RFI.

Another crucial aim is to try and "harmonise health training across different countries" because "we're not that well organised on an international level" he added.

France is contributing more than 120 million euros in the 11,000m2 campus, which is located in the Gerland biotechnology research cluster in Lyon. The area is already home to WHO's International Agency for Research on Cancer, and pharmaceutical groups such as Sanofi.

Lyon is "an exceptional ecosystem" for medicine and "wants to be the capital of cooperation", said the city's ecologist mayor Grégory Doucet.

Buzyn joined the WHO in January this year. Dabis praised her experience on international missions and healthcare management, but also her years as a researcher which meant she knew "a lot about training".

Earlier this month Buzyn was put under formal investigation for alleged mishandling of the Covid pandemic in 2019/2020 when she was health minister.