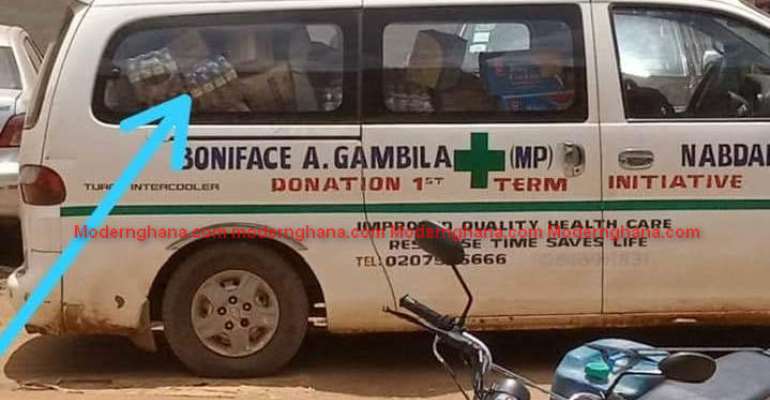 An ambulance that was donated to the people of Nabdam District of the Upper East Region by Boniface Gambila the former Member of Parliament which was later described as a “rickety automobile” by the current MP Dr. Mark Kurt Nawaane has been captured carting beverages.

It was unclear where the Boniface Gambila donated ambulance was heading to with fully loaded packs of drinks, biscuits and some other consignments.

Somewhere in 2018, the current Member of Parliament for Nabdam, Dr. Mark Kurt Nawaane, told this reporter that he and the Nabdam Assembly injected lots of money into fixing the rickety ambulance procured for the area by Boniface Gambila, a former MP.

Dr. Nawaane was then responding to comments by Mr. Gambilla who said the current MP has done nothing in his promise to even acquire a new ambulance for the area since he resumed office as MP.

But according to Dr. Nawaane, he and the assembly pulled resources together to fix the vehicle after it was rendered immobile and dumped.

“He bought an ambulance, yes. But he bought a rickety ambulance. He thought that it could help in his campaign. Unfortunately, the ambulance could not even move from Kongo to Asoryine," he stated.

However, after the ambulance has been fixed with the help of the assembly and the MP, as he stated, it has assisted in various ways providing services even at the Bolgatanga Regional Hospital but now seen carting beverages.