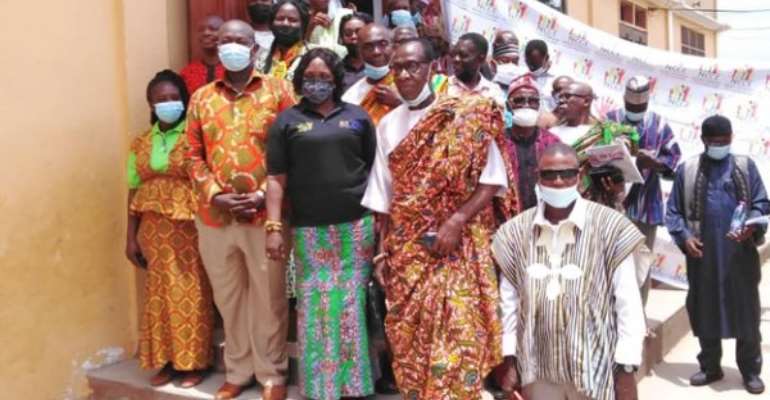 Hajia Hajara Rufai, Commission Member, National Commission for Civic Education (NCCE), has appealed to Ghanaians particularly the youth to be responsive to issues relating to the security of the nation.

They should be involved actively in discussions, workshops, and seminars designed to address factors, which had the tendency to throw the nation into turmoil.

According to the Commission Member, ensuring national security was a shared responsibility, saying, this had become imperative in the wake of the upsurge in sophisticated crimes, which threatened social cohesion, peace, and sustainable development.

Hajia Rufai, who was addressing a town hall meeting at Anloga, organized by the Oforikrom Municipal Office of the NCCE, said the citizenry ought to be vigilant.

“The expectation is that, as patriotic citizens, we leave no one behind in the fight to overcome violent extremism,” she observed, adding that, curbing complex crimes such as terrorism, kidnappings, cybercrime, human and drug trafficking should not be seen as the sole responsibility of the government.

The meeting discussed topics on secessionism and violent extremism, and targeted opinion leaders at Anloga.

It formed part of the civic education by the Oforikrom Municipal Office of the NCCE to expose the participants to the emerging threats to humanity such as globalization, the advancement in technology, the proliferation of small arms, and substance abuse.

Consequently, the nation should mobilize the needed resources to strengthen and safeguard Ghana's sovereignty to advance sustainable development.

The nature of security threats had a bearing on national security, he noted, and lauded the Oforikrom NCCE for convening the meeting for stakeholders to brainstorm on the safety of the people.

Madam Vera Ofei, Oforikrom Municipal Director of NCCE, in an interview with the Ghana News Agency (GNA), on the sidelines of the programme, said the 'Town Hall Meeting' aimed at building the capacity of the people to be responsive to national security issues.

These included ethnocentrism, religious and chieftaincy conflicts, power, self-enrichment, climate change and destruction of the ecosystem, cybercrime, and development issues, she stated.

The participants, in their deliberation, agreed that there was the need for Ghanaians to embrace unity in diversity, tolerance, and discipline in all facets of the society.

It was also incumbent on the government to be assiduous in its development agenda to improve the living conditions of the people, and also resource state-owned institutions mandated to maintain law and order.