In perspective of Otabil’s view of karma 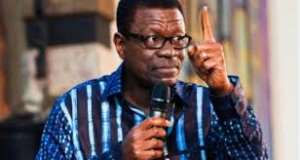 Karma originated from the Hindu and Buddhist doctrine that the sum of a person’s actions and previous states of existence decides their present and future states. The term therefore looks more to human existence in some futuristic time after we are dead. But the the currency of the modern usage assumes the linguistic connotation that a person will get the results of his or her actions whether good or bad, right here in this life. We will assume as true the current usage of karma in this article. And when we do, the next question is whether karma is biblical. This question has been instigated by Ghana’s foremost teacher and preacher, Dr. Mensah Otabil, who has stated recently that karma is not biblical.

We will approach this whole question of whether or not karma is biblical by the reflective supposition that we can find whatever we want to find in the Bible, whether good or bad. To wit, one can find support in the Bible for slavery, for genocide, for war, for racism, for injustice, for discrimination, for extortion, for prostitution, for fraudulence or for bribery. At the same time, one can also find support in the Bible for neighborly love, for egalitarianism, for charity, for friendship, for kindness, for self sacrifice, for honesty, for peace and for justice.

So that when you come to the question of karma, one can also find sufficient support for the notion of karma and sufficient support against the notion of karma. As an initial matter, remember that the totality of the Christian doctrine is based on the forgiveness of sin; so that no matter how egregious and frequent one’s sins, one can supposedly go unto one’s knees, repent of one’s sins and be forgiven immediately. This grace of forgiveness is up to and inclusive of the last moments of a person’s life, as evidenced in the case of the prisoner hanging on the cross who was forgiven by Christ.

This notion of forgiveness is also enshrined in the Old Testament when God cried out through Isaiah, saying, “Come and let us reason together, saith the Lord, though your sin be as red as scarlet, they shall be as white as snow; though they be as red as crimson, they shall be like wool.” See Isaiah 1:18 (KJV). We find this forgiveness in play in the issue of David, who actually slept with Uriah’s wife, killed him and others at the war front, and never faced an retribution to his person. See the eleventh and twelfth chapter of the book of Samuel.

We can also cite a panoply of texts to support the notion that God does not forgive human sins. We know from the beginning that Adam and Eve suffered the punishment of their errors after eating of the fruit of good and bad. We also know that the sins of Sodom and Gomorrah were duly punished. We also know that most of the accounts in the Bible actually support the notion of crime and punishment, and of retributive or poetic justice. That is why the Bible is so popular with us, because it tends to support the notion that humans get their just desserts, whether good or bad.

We don’t know the answer to this; and we will never know.

There is also the question of Job who suffered evil fortune when he had done nothing at all. His story epitomizes the fact that a person can go through extreme punishment although he may not have done nothing wrong. This notion is also both Aristotelian and Platonic and actually influences the tragedies of Sophocles, Aeschylus and all the rest of them.

It therefore follows that we don’t have enough evidence to conclude whether karma is biblical or not. Or whether it is even natural or supernatural. If we look at the Bible, we will not find the answer. And if we look beyond the Bible and look at life, we will not find the answer. We can therefore reject both sources and look at this whole purpose of human civilization. Karma is not a natural construct because it does not occur in the animal kingdom.The kindness of a deer is more likely to land it in the jaws of a hungry lion; and the kindness of a hungry lion will lead to it starving to death. So here, karma is of no consequence because kindness will certainly lead to extinction.

But as humans, the only difference between us and the animals is that we strive to build civilization through co-existence, and the more we have succeeded in this endeavor, the more we have advanced and succeeded as a dominant species over all other species. Going forward, the concepts that support these notions of civilization-peace, honesty, friendliness, cooperation, charity, love- will be determinant as the foundation of our survival as a species.

To foster our notions of civility and civilization therefore has to be the focus of the religious establishment. And our religious establishment becomes relevant insofar as it works to support these perennial values and virtues of human civilization. People like Otabil who have succeeded in establishing their churches did so mainly because they preached these values and virtues. They did not succeed by stating the theories of Nietzsche or Machiavelli which tend to support human aggression or dominance as a means of survival.

If you give the whole matter this context, it is at the minimum an abandonment of the teachings of the Bible to argue that the Bible does not support karma because the Bible is not conclusive on the matter. The Bible supports karma and preaches forgiveness of sins at the same time. But our civilization has an added incentive to allege a preference for karma, and so is our religion, if only to discourage sin and evil which threaten to destroy our world.

If a pastor of a big religious movement like Otabil’s preaches non-karma, he must weigh the equities of his message to find out what he is trying to achieve. That is what we call the profound and overwhelming responsibility and duty in teaching which has hitherto brought Otabil into prominence.

More from Feature Article
ModernGhana Links
A Writer’s Block (On Purchasing Power And Purchasing Power)
Ghana has only one major problem which when effectively resolved, alll shall be well with her
Why Alban Bagbin Is Not Fit to Be Ghana’s Parliamentary Speaker
TOP STORIES