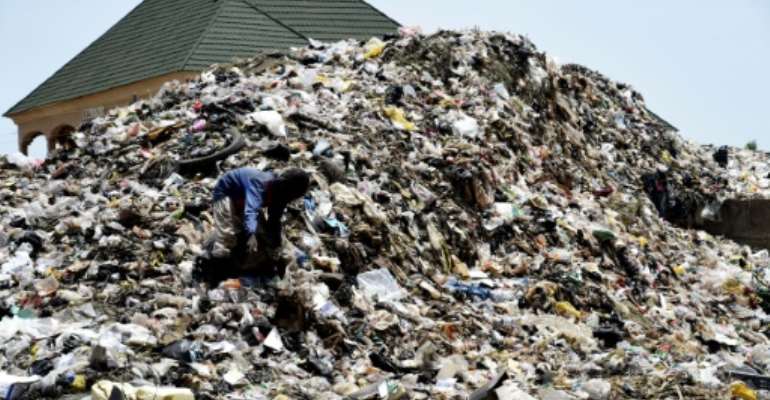 A young scavenger hunts for things of value in rubbish dumped on a road in Sokoto. By PIUS UTOMI EKPEI (AFP)

Straddling a caravan route to the Sahara, the city of Sokoto has since ancient times been a major trading hub in Nigeria's extreme northwest savannah.

But a surge in attacks and mass school kidnappings by criminal gangs, known locally as bandits, has dealt the region a terrible blow, making farming and trading impossible for many.

Seeking to stop the violence, authorities in the northwest including in Sokoto state have imposed restrictions on travel and commerce that residents say are adding to the economic hardship.

Earlier this month, 13 districts across the state were put under a lockdown that included a ban on the transport of cattle and firewood, a suspension of some animal markets and caps on fuel sales.

The price of sugar cane and other farm produce has soarded because of the security crisis. By PIUS UTOMI EKPEI (AFP)

The Ramin Kura Market in the district of Sokoto North, on the outskirts of the city, is normally crammed with vendors selling oranges, lemons, sugar cane, bananas, pineapples, coconuts, sweet potatoes, onions and yams.

Now the supply of fruit and vegetables has dwindled and prices have gone up.

"People cannot farm because of the insecurity so we have less," said Sahabi, a spokesman for the market's fruit sellers' association representing 600 workers.

In normal times, lorries head to Ghana, Cameroon and Niger, but just last week, Sahabi said, "a truck with food heading to Niger was stopped by the military and asked to return."

Sokoto's security commissioner Garba Moyi told AFP that access to food was being restricted in parts of the state.

"It's just to make sure the bandits are starved," the retired colonel said.

He said civilians were allowed to purchase only enough food for their families.

"Nobody is completely, totally, without food," Moyi said.

Many people are also feeling the pinch from restrictions on fuel sales -- with some stations closed and others banned from selling more than 5,000 naira worth of fuel per person.

But because villagers no longer come into town, Abdullahi said they now make about 500,000 naira per week.

At the popular Kara market in the Kwanni area of Sokoto, a cattle trader said they had only half the number of cows they had before.

Even charcoal, which many people use for cooking, has become more difficult to find.

Supplies of charcoal, a staple for cooking, have also been hit, forcing up prices. By PIUS UTOMI EKPEI (AFP)

Before they could get supplies from the "bush", he said, but not anymore. "It really affects us."

While the government has said the measures were temporary, Moyi insisted they were essential.

"Anywhere there is no supply of food, fuel, communications, movement, then they (the bandits) will be forced to surrender".

"There are so many (bandits) camps in Sokoto... 40 to 50," he added. And with ongoing military operations in neighbouring Zamfara state, he fears that more gunmen will flee to the state.

"It's happening already. Sokoto now has become a safe haven for them."

Local media reported that Moyi's house in Isa district was burnt down last week by residents who were angry at worsening insecurity in the area.

Restrictions on movement and trade have also been imposed across Zamfara, Katsina and Kaduna states -- an area larger than Portugal.

In Zamfara, phone lines have been shut down for over three weeks.

Abdullahi from the petrol station is anxious, as the government has not said when it will lift the lockdown and when activities can resume.