Mr. Ajao at a local ceremony with some Ekpoma residents. Right is Dr. Okhilua.

When Chicago-based Nigerian American nursing professor Daniel Okhilua needed to travel to his hometown in Nigeria last May, he was so concerned for his safety that he kept his travel plan to himself.

“I was really fearful because of stories of kidnappings, robberies and deaths from all over Nigeria that are on social media. So, I planned to sneak into Ekpoma, spend a few days and sneak out.”

With a population of about 200,000, Ekpoma is the administrative headquarters of Esan West Local Government Area (LGA), Edo State, mid-western Nigeria.

Dr. Okhilua says he was surprised to find that “Ekpoma was relatively peaceful. I ended up staying for a month, the longest I have stayed in recent years. I had a good time.”

He has the police and Ekpoma community inhabitants to thank for safe travels and a peaceful stay—a result of effective community policing in the town.

Chief Superintendent of Police Olubayo Ajao, the Divisional Police Officer (DPO) for Ekpoma, Esan West, explains the underpinning philosophy of community policing: “The police and the community have a common purpose and that is to fight crime so that people can live in peace and harmony. Therefore, both have no choice but to work together to achieve that common purpose.”

Community policing relies on the police force building relationships with the people living in their areas of operation who in turn support the officers in their work.

He studied history at the University of Lagos and was a member of the Nigerian police contingent that served with the UN peacekeeping operations in Liberia between 2007 and 2008.

Why is Mr. Ajao a folk hero in the community after spending just about a year in Ekpoma? “He is a regular person, fully embedded in the community, sharing people’s joy and pain,” explains Dr. Okhilua.

At the same time, according to Felix Obhakhan, an Ekpoma resident, “He [Mr. Ajao] is a no-nonsense police officer; tough on criminals.” 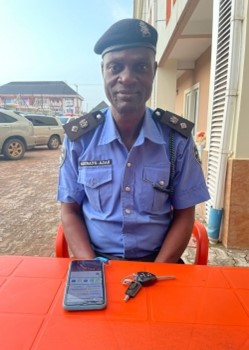 The security situation used to be quite concerning but “through police-community partnership, driven by the police leadership and others, there have been vast improvements,” says Chief Paul Itua, a community leader and lawyer.

He attended a church service in the morning, dressed in local attire and sat in the back row, nondescript. After the service, he stayed a little longer outside the church premises bantering with a group of people—old and young, women and men.

That afternoon he was one of the hundreds of attendees at a funeral. He stood quietly in a corner, saying quick hellos to people who recognized him as his eyes scanned the surroundings.

At about 6 pm the same day, he was at a community leaders’ meeting, organised to discuss peace and security in the LGA. He brought freshly picked mangoes for the group.

Mr. Ajao actively participated in the conversation that veered away, intermittently, from security to history or religion or Covid-19.

“He is a brother. We’re lucky to have him here,” noted Mr. Obhakhan, who convened the meeting.

Mr. Ajao says that the relationship between the police and the community helps in intelligence gathering. “We get lots of information from the people, which helps us to nip crime in the bud. We have arrested many kidnappers. I am personally involved in such operations. We have recovered guns and handed the criminals over for prosecution.”

“They trained us in community policing and continue to encourage and motivate us to do more,” he says. “The CP personally leads patrol teams in the day and at night. I try to emulate him.”

The Nigeria Police Force (NPF) is still largely ill-equipped, although community policing is helping to elicit various forms of non-government support for the Ekpoma police team. Not long ago, an anonymous individual donated an operations vehicle to the police team in the town.

Another result of the police-community partnership is the formation of a group of more than 1,000 young people called “Atanakpa” (meaning Tigers) to help fight crime in Esanland. Atanakpa members provide useful tips to the police and both groups sometimes engage in joint pursuit of criminals.

The police trained members of the Atanakpa group under the auspices of Edo State Network Security and with the backing of the state governor, Godwin Obaseki.

Their mantra is: “See something, say something.”

The Director of the Edo State Network Security (Atanakpa-Esan) and community leader, Joel Aidamebor, confirms that, “We work very well with the police, both Mr. Ajao and the Area Commanders. We complement their effort.”

The NPF in 2019 relaunched community policing, although police authorities have canvassed the concept for decades. The initiative involves the recruitment of 40,000 Community Policing Officers for Nigeria’s 774 LGAs. Newly recruited officers will serve in their respective communities, leveraging their deep understanding of such communities.

The urgency for more officers aside, effective implementation of community policing in Nigeria depends also on addressing NPF’s cultural, institutional and logistical challenges.

As well, there is the perception of the NPF’s propensity to use excessive use force on citizens. In 2020, the Special Anti-Robbery Squad (SARS) was accused of extrajudicial killings and brutality, triggering the #EndSars Twitter campaign and subsequent riots. The government later disbanded SARs.

Despite these challenges, many believe an effective implementation of community policing nationwide could be central to successful efforts at reinventing the NPF.

Mr. Ajao is confident of success because “The IGP and CP are well versed in the art of community policing and are determined to succeed.”

That may well be true, but for Ekpoma inhabitants the police officers they work with led by Mr. Ajao are now family. “The synergy between the police and the community is working and it’s a welcome development,” says Chief Itua.

Latest Photo Reports
Catch up with all the political quotes from our politicians.
Advertise here
More from Article
ModernGhana Links
Would Kenyan women's rights be safe under William Ruto? Why they might not be
Mosquito species from Asia poses growing risk to Africa's anti-malaria efforts
Mosquitoes: there's malaria, plus 5 other diseases they pass on to humans
TOP STORIES

Ghana has had lawyers, communication expert as president; it...
14 minutes ago