Sudan in talks with protesters over oil shutdown 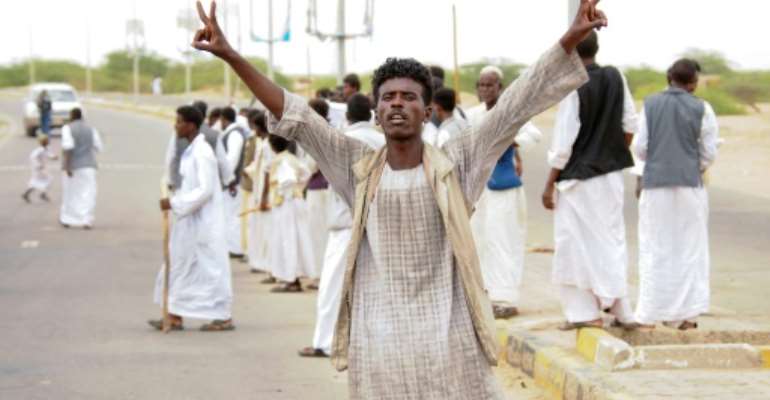 A protester flashes victory signs following the arrival in Port Sudan of a delegation led by a member of Sudan's ruling Sovereign Council on September 26, 2021. By Ibrahim ISHAQ (AFP)

Sudan's transitional government on Sunday held talks in the Red Sea trade hub of Port Sudan with leaders of a protest movement that threatened the impoverished country's fuel supplies and revenue.

Information Minister Hamza Baloul confirmed to AFP the arrival of a senior delegation while another senior official, who preferred to remain anonymous, said "the delegation won't come back (to the capital Khartoum) before solving the crisis".

Sudan had reserves to last only for 10 days, Obeid's ministry said.

Neighbouring South Sudan produces around 162,000 barrels of oil per day, which are transported by pipeline to Port Sudan and then shipped to global markets.

The delegation to Port Sudan, the country's main seaport, is headed by Sovereign Council member Shams al-Din Kabashi and other ministers. They include Obeid and Foreign Minister Mariam al-Mahdi, the official SUNA news agency reported.

Kabashi met with protest leaders after his arrival.

Speaking in Khartoum on Sunday, sovereign council chief Abdel Fattah al-Burhan described the protesters' demands as "a political matter that must be dealt with politically".