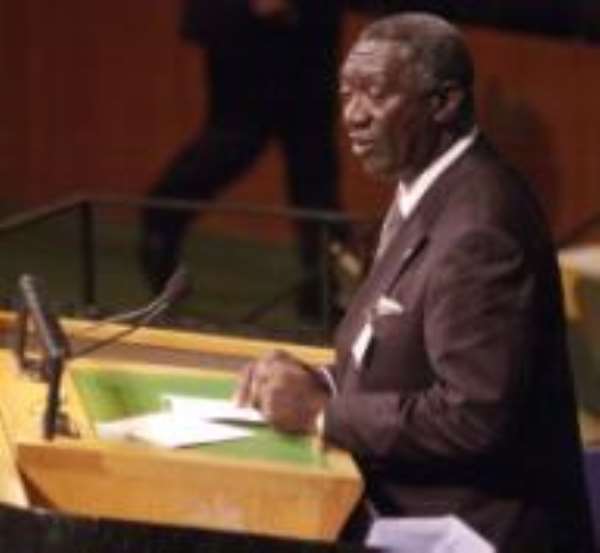 Ghana celebrates 45 years as an independent nation on 6 March. It was a joyous occasion 45 years ago, as Ghana’s independence opened the floodgates to black African liberation from colonial rule. On 27 April, Ghana will again observe the 30th anniversary of the death of the man who led the country to that independence in 1957: Kwame Nkrumah. (He died on 27 April 1972 in Bucharest, Romania). In commemoration of the two events, we have a 10-page special report here; first we look at whether President John Agyekum Kufuor’s new government can deliver the goods it promised when it came into office a year ago, and on the subsequent pages why and how Nkrumah’s dream of industrialising Ghana within a generation as a model for all Africa was frustrated. Kodzo Ahiata reports from Accra on Kufuor’s one year in office, while Osei Boateng takes us through memory lane — there is a poignant lesson for all Africa. Though Ghana may not yet have been turned into the economic paradise that President John Kufuor (“the gentle giant” — he is 6ft 5in tall) promised the nation a year ago, even his political opponents admit that he has done remarkably well, especially on the economic front. He has succeeded in halting the country’s runaway inflation and stabilising the national currency, the cedi. When he came into office on 7 January last year, inflation was running at 40.9%, interest rates were in excess of 50%, and the cedi had depreciated by 300% against the US dollar — from C2,550 to $1 in August 1999 to C7,700 in December 2000. The nation’s external debt stood at US$5.8 billion while the domestic debt was around 9 trillion cedis. Against this backdrop of nearly every macro-economic indicator gone sour, Kufuor assumed power with a pledge to introduce a positive change and restore hope to a country on the verge of collapse. The government immediately embarked on a short-term objective to stabilise the situation and bring inflation down to 25% by the end of 2001. To its credit, the target was achieved. Inflation was down to 25.2% by last November (from 40.9%), while interest rates had fallen dramatically to 33%. Even the poor cedi showed some semblance of good health. It had depreciated by only 2.7% against the US dollar throughout the whole of last year — a remarkable achievement. This month (February) the country is expected to receive debt relief totalling $170m under the HIPC (Highly Indebted Poor Countries) initiative. According to the finance minister, Yaw Osafo-Maafo, “assistance under the HIPC initiative is expected to reduce the external debt burden significantly”. Debt service payments, he says, will average about $230m between 2002 and 2004, down from about $350m between 1997 and 2000. Before Christmas, Ghana reached an agreement with the G8 countries for a 100% write-off of bilateral loans contracted between 1983 and June 1999. All this, says the finance minister, will help greatly in remedying the dire economic situation the government inherited. Opposition praises Having taken care of the externals, the government recently introduced the three-year Government of Ghana Indexed-Linked Bond (GGiLB) that converted C3.05 trillion of the domestic debt into medium term debts, thus allowing the government to postpone payment of the debts. Now even the opposition is singing Kufuor’s praises. “The government has done very well, the macro-economic indicators such as inflation have been well-managed, the stability of the domestic currency has been good, interest rates have been reduced, all these point to a very good macro-economic environment”, says Moses Asaga, the opposition finance spokesman. But Toma Imirhe, business editor of the respected weekly Business & Financial Times in Accra, says although the measures so far adopted by the government have done wonders for economic stability, they have done little to help economic growth. “While the economy is not yet in recession,” Imirhe says, “it has come pretty close, which is why the government is now ready to cautiously start reflating. Dangers abound in the strategy, not least the possibility that increased government spending in the face of a deteriorating balance of payments position may send the cedi into a fall, thereby throwing the government’s expenditure plans askew.” To the average Ghanaian, the net effect was that the Christmas season that coincided with Kufuor’s first anniversary in office, was low key as many complained of a cash squeeze. Gone was the gaiety traditionally associated with the season.