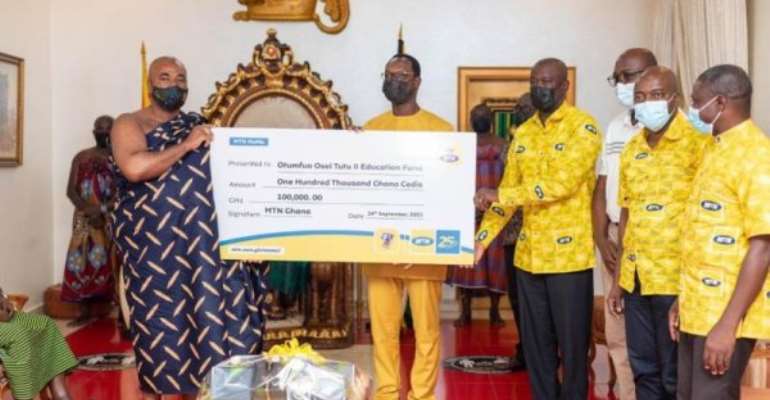 MTN Ghana has donated GH¢100,000 to the Otumfuo Education Fund as part of its 25th-anniversary celebrations.

The company made the donation when a team of officials led by the Chief Executive, Mr Selorm Adadevoh paid a courtesy call on Otumfuo Osei Tutu II at the Manhyia Palace.

The visit also formed part of activities marking this year's Ashantifest, an annual event which is celebrated by MTN during which the company gives out exciting packages to show appreciation to its customers in the Ashanti Region.

Mr Adadevoh told the media after the presentation, that MTN shared in the vision of the Asantehene to impact lives through education.

He said education was one of the three pillars of the MTN Foundation so it was only appropriate for MTN to support the laudable initiative of Otumfuo as the company celebrates 25 years of doing business in Ghana.

Otumfuo, he said, had always been a source of inspiration to the company saying that" he is someone we always come to for advice and support and we want to make sure as we celebrate our 25th anniversary we officially inform him and also pledge our support for all that he is doing through the education fund. "

The CEO said the donation was the company's token towards a worthy cause and that it was excited to be part of an effort to give hope to the underprivileged in society.

He said Ashanti Region was a very important Region to MTN as a business and would continue to reward customers in the Region through the Ashantifest celebrations to show appreciation for their support over the years.

Take me to court, I will get the court to also overturn the ...
53 minutes ago

We’ve revamped TVET education in Ghana than any government –...
53 minutes ago