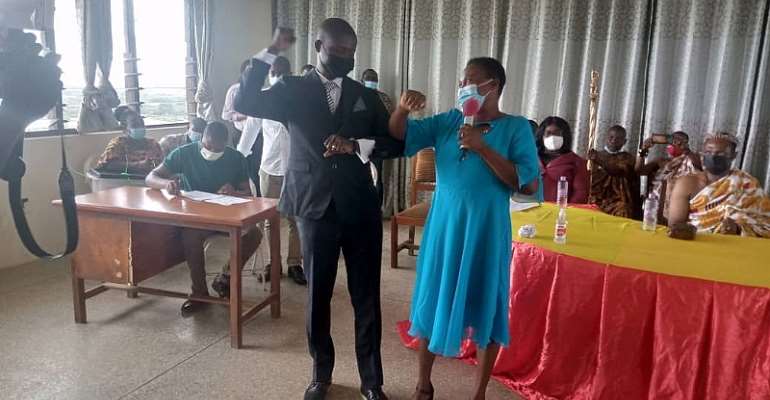 He won more than two-thirds of the Assembly Members votes at Apam on Thursday.

He need just 35 votes but managed to obtain 39 out of the 52 votes cast to confirm him as DCE.

The election was conducted by the Gomoa West District Director of the Electoral Commission, Madam Loretta Lartey.

He was accordingly sworn into office by the Gomoa District Magistrate, Her Worship Justice Annie Adobor after Swearing the various Oath of Office.

Minister for Information, Hon. Kojo Oppong Nkrumah present at the voting lauded the Assembly Members for their collaborative effort aimed at improving the lives of the people in the Gomoa West District.

He urged them to continue in the same manner adding the development of the district depends on unity and coexistence.

The Central Regional Minister, Hon. Mrs. Justina Marigold Assan had earlier on encouraged the Assembly Members to affirm their support for all President Akufo Addo's DCE nominees in the region.

She observed that Gomoa West District has been one of the most peaceful in the Region thus expressing the hope that Hon. Bismark Baise Nkum would be given the nod for the second term.

He pledged the unflinching support of Nananom to the DCE towards the total development of the Gomoa West District.

Hon. Bismark Baise Nkum in his address thanked His Excellency Nana Addo Dankwa Akufo-Addo for his re-nomination and the Assembly Members for confirming him.

He pledged to work with them as they did over the last four years. The Gomoa West District Chief Executive praised Nananom, opinion leaders and various groups and associations for their cooperation urging them to do same as he begins another term of massive development to come.

"Am striving to create Job opportunities for the youth in the District to reduce youth unemployment to curtail anti-social activities related to unemployment and also strengthen the education sector.

"When I assumed office as DCE in 2017, the Gomoa West District Assembly was last on the District League Table placing 216 out of the then 216 Metropolitan, Municipal and District Assemblies in the country.

"Thank God Gomoa West District has risen to appreciable position placing 147 out of 260 MMDAs. Thanks to prudent programmes and policies put in place by His Excellency Nana Addo Dankwa Akufo Addo to improve the quality of lives of the people.

"Gomoa West District also placed 9th position out of the 22 MMDAs in the Central Region. As I speak our BECE pass rate has risen from 37% in 2016 to 70% we are anticipating it to reach 85% or above.

"Going forward the Assembly is going to provide infrastructure development for our schools including Teacher's Quarters to house our gallant teachers.

"We are constructing 4 and 6 unit teachers quarters to accommodate them. We have completed Gomoa Dago and Hweda projects and the rest are ongoing. This is going to attract more teachers to the District," he stated.

Hon. Bismark Baise Nkum thanked Gomoa West Constituency Executives of the NPP for the kind of support and encouragement which he noted had enhanced his performance as DCE.

He accordingly expressed his gratitude to Chairman Robert Kutin Jnr and his Regional Executives.