German elections: what to expect 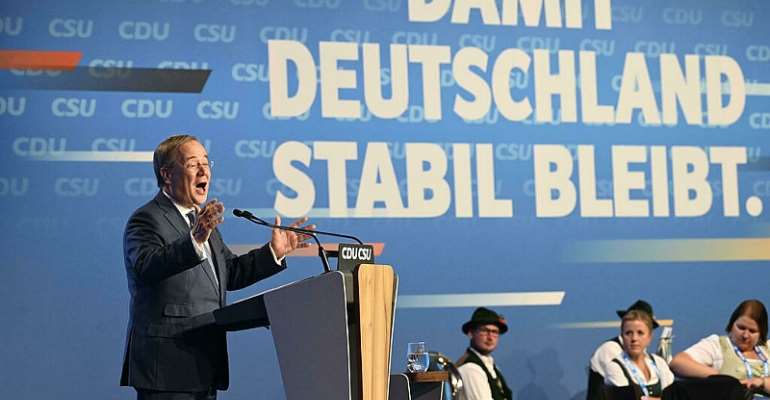 Germany faces a period of tough negotiations to form a coalition government after the federal election on Sunday, as none of the participating parties are likely to win more than 50 percent of the vote. Who are the main candidates, and what are the coalitions most likely to be formed?

Eight political parties are currently represented in the Bundestag, Germany's parliament, which has currently 709 seats.

The big surprise of the 2017 elections were the Liberals of the Free Democratic Party (FDP, 80 seats, Christian Lindner,) who made a comeback into parliament after a four-year absence.

The radical left party Die Linke, (currently, 69 seats, candidates: Janine Wissler and Dietmar Bartsch) are the ideological heirs of the East German Communist Party SED, and is struggling to meet the five percent threshold to enter the Bundestag.

The candidates
Armin Laschet
Laschet was born in 1961 in Burtscheid, a suburb of the German town of Aachen and was raised in an observant Roman Catholic family. He studied law journalism at the universities of Bonn and Munich, then worked as a journalist, holding the position of Bonn correspondent for the Bayerischer Rundfunk, a Munich-based radio and television broadcaster. He also served as the editor-in-chief of the Catholic newspaper KirchenZeitung in Aachen.

The journalist-cum-politician developed a reputation for perseverance in politics and has always been a faithful ally to current Chancellor Angela Merkel. If he manages to win Germany's top job, he intends to continue her moderate, centrist approach to politics. He has said he stands for “a level-headed approach and avoiding extremes" and wants to move towards societal cohesion and the "social market economy."

Olaf Scholz
Olaf Scholz has served as Minister of Finance and Vice-Chancellor of the Federal Republic of Germany since March 2018. He was born in Osnabrück in 1958, grew up in Hamburg and is married.

Scholz became Minister of Labour and Social Affairs in 2007, and from 2011 to 2018, he served as Mayor of Hamburg. From February until April 2018, he was acting chair of the SPD.

He could be characterized as typically associated with burghers, or the ruling class, in his home city of Hamburg: pragmatic, plain-spoken (“I'm liberal, but not stupid,” he was famously quoted when talking on law and order) and Protestant - no alcohol was served at his goodbye party at Hamburg's city hall, because it was a "working day." Currently leading in the polls.

Annalena Baerbock
Baerbock was born in Hanover in 1980 and grew up on a farm with her two sisters and two cousins. She studied political science and public law at the University of Hamburg in 2000 and had a stint at the prestigious London School of Economics and Political Science, studying international law.

She started a dissertation on natural disasters and humanitarian aid at the Free University of Berlin but hasn't finished her thesis — her political career got in the way.

She joined the Green party in 2005. In 2013, she was elected into the European Parliament and has since held her seat. She served as the Greens' climate policy spokeswoman between 2013 and 2017, before becoming co-leader of the party alongside Robert Habeck in 2018.

Within the party, Baerbock played a significant role in all but burying the Greens' decades-old division between fundamentalists and realists.

Possible coalitions
As none of the parties will be able to win an absolute majority, they are forced to engage in negotiations to form a coalition.

If Olaf Scholz's centre-left Social Democrats come first, the Greens, now third in polls, would be his obvious choice for a coalition partner. The parties broadly agree on environment policy and on raising taxes and social spending, though the Greens are far more hawkish on Russia policy.

But if the SPD is to reclaim the chancellery for the first time since 2005 they will also need to get the liberal Free Democrats on board to form a traffic light coalition, so-called due to the party colours of red, green and yellow.

FDP leader Christian Lindner has sounded cool on the possibility, saying legalising cannabis is about the only thing his party could easily agree with the SPD and Greens.

While the liberals are far to the right of the SPD and Greens on economics, they might compromise if it meant keeping the far-left Linke, loathed by many of their voters, out of office, and if it means they win control of the Finance Ministry.

Probability: 45 percent win, according to the Eurasia group.

"Jamaica" (CDU/CSU, Greens, FDP)
Armin Laschet's Christian Democrats would prefer to team up with the FDP. "Christian Liberal" governments ran Germany for much of the post-war era, and the two are closely allied on economic policy.

But the two parties are unlikely to have enough seats to govern alone. So they could ask the Greens to form a Jamaica coalition - the parties' colours of black, yellow and green make up that country's flag.

However, such an alliance will also not be easy: liberal leader Christian Lindner unexpectedly pulled out of talks on forming a Jamaica coalition in 2017.

On environmental policy the Greens and the FDP are far apart, while both the conservatives and the liberals are significantly more hawkish on defence spending.

Probability: 30 percent, according to the Eurasia group.

The SPD has been a reluctant junior partner to Merkel's conservatives for 12 of the past 16 years. They have ruled out working together again, but said the same at the election in 2017, and ended up agreeing when other options failed.

Probability: 10 percent, according to the Eurasia group.

"Red-red-green" (SPD, Linke, Greens)
If the SPD and Greens fail to team up with the FDP, the conservatives have raised the spectre of a "red-red-green" coalition with the hard-left Linke party, heirs to the Communist Party that ruled East Germany.

The SPD and Greens have also ruled out working with any party refusing to commit to the NATO military alliance or Germany's European Union membership, both of which the Linke has called into question.

The Linke party could fall below the five percent threshold needed to enter parliament, but is likely to win three constituencies directly, meaning it would still contribute enough seats to a left-wing coalition to reach a majority.

Probability: 5 percent, according to the Eurasia group.