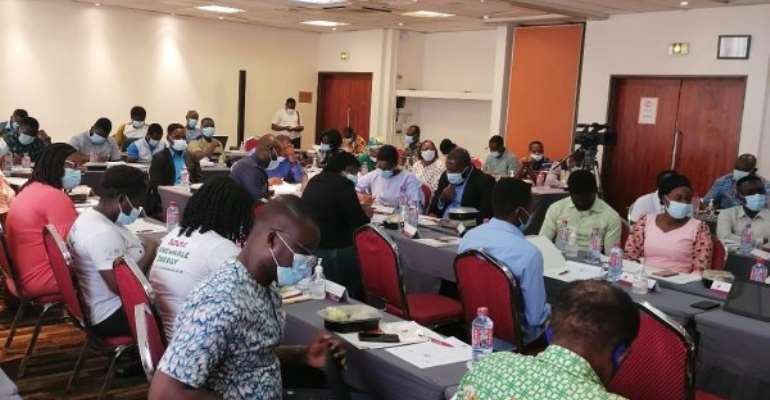 Air Pollution is Ghana's number one environmental risk to public health, causing about 16,000 premature deaths annually in the country, a World Bank Country Environmental Analysis (CEA) on Ghana has revealed.

The workshop was held to disseminate information on the, “Pollution Management and Environmental Health Programme” a World Bank programme being funded by the governments of Norway, Germany and the United Kingdom to build the capacity of Ghana's Environmental Protection Agency (EPA) to address existing monitoring and planning gaps for air quality management.

Mr Amoasah was making a presentation on the Environment, Health and Economic Impact of Ambient and Household Air Pollution in Ghana.

He said the situation of air pollution in the country was dire and must not be taken for granted at all, adding that, for instance, air pollution was the sixth-ranked overall risk for death in Ghana, while 100 per cent of the entire population was exposed to Particulate Matters (PM ) concentration levels that exceeded World Health Organisation (WHO) Guidelines.

The WHO has also estimated an annual mortality from air pollution to be more than 28,000 of the population, Mr Amoasah said.

He said the CEA also estimates the cost of the country's air pollution to be about US$2.5 billion, equivalent to 4.2 per cent of the 2017 Gross Domestic Product, while the average cost of its Green House Gas emissions to the global community was US$2.3 billion each year.

Over 70 per cent of Ghana's population (20.5 million) burn solid fuels like fuel wood, charcoal, and dungs in their homes for cooking and heating, which continued to pollute the air people breathe both at the rural and urban centres.

He said unfortunately, the air pollution disease burden was disproportionately borne by infants and the elderly.

Mr Emmanuel Appoh, Deputy Director, in charge of Air quality, EPA, said air pollution due to open burning, which was a crime in the country, was still very high and needed concerted efforts led by the local government at the district level to be dealt with.

Mr Ebenezer Appah-Sampong, Deputy Executive Director, in charge of Technical Services EPA, commended the partners that had come in to empower the Agency to do its work efficiently to help manage emissions in the country.

“It has also enhanced understanding of the importance of rigorous attention to standard operating procedures and quality assurances protocols necessary for high quality gravimetric analysis.

He emphasized the need to expand the air quality network to other regions of the country including Kumasi, Tema, Takoradi, Tamale and other rural areas where there were issues related to charcoal burning and others.

Mr Pierre Laporte, World Bank Country Director for Ghana, Sierra Leone, and Liberia, said to ensure a healthier Ghana, the role of civil society and the media were crucial in advocating for a change among the populace on the need to stop indiscriminate pollution of the environment.

We need dramatic and systemic change and awareness creation for the stakeholders to understand the impact of air pollution and the change in behaviour, and enforcing environmental standards, he said.

Akufo-Addo, Paul Kigame, others to address YouthConnekt Afri...
15 minutes ago

I'm sorry, was running away from a prophecy that I'll be sho...
15 minutes ago