"Tell the children the truth " 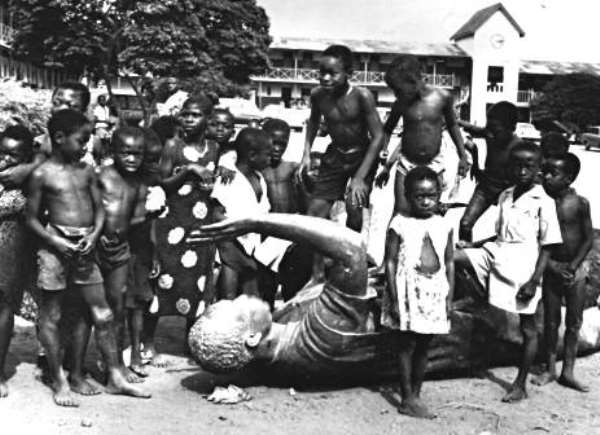 Some of us are really surprised when some Ghanaians behave as though nothing wrong took place during Nkrumah’s regime.

The people of the Gold Coast lived by Christian love and God-fearing principles until Nkrumah used very crude ways to come to power. After he had gotten hold of power, he replaced this love and brotherhood among Ghanaians with violent enmity.

He also brought into our body politic disrespect of elders by the youth, organizing people to hoot at the United Gold Coast Convention UGCC leaders during their rallies in order that speakers at these rallies would not be heard.

His people also threw stones at the UGCC leaders, including Dr. J.B. Danquah and Obetsebi Lamptey.

His opponents protested against this crude form of politics but men like Mr. N.A Welbeck replied that hooting and stone throwing was part of political organization.

How could anyone considering himself to be a civil and patriotic person, accuse Cols. Kotoka and Afrifa as adventurers, especially when the man from whom they wrested power did not believe in constitutional governance.

These CPP guys staged a coup against the constitution by arresting men, women, the aged and young children and dumped them into prisons without trial.

They killed a lot of these people in prison and ruined the lives of others, destroyed their businesses and forced others into exile.

I in particular experienced this singular act of atrocity when in 1958, Nkrumah jailed me for five years without trial and after serving the five year term, further decreed that I serve an additional five year term.

Where would I be today if Kotoka and Afrifa had not intervened to liberate us?

I might still be languishing in prison or probably would have died in prison, as was the case of others.

God sent Kotoka and Afrifa, who risked their lives to set us free to meet our families.

My father and my third child both died while I was in prison and my children’s lives became disorganized.

This same fate greeted other detainees. How could people call such “Moses” and “Joshua” who brought us out of the devil’s dungeon as law breakers.

Were the people of this nation and the country itself the property of Nkrumah or the CPP?

Danquah, the great son of Akim Abuakwa was the father, the author and lover of our constitutional freedom today. Nkrumah knew nothing about it.

He did not believe that self government could be attained through constitutional means because he was completely ignorant and knew very little about constitutional governance.

The learned constitutional fighter, Dr. Danquah, warned Kwame Nkrumah not to plunge the country into a political quicksand that would give the then colonial government the excuse to rough up Ghanaians.

Therefore, when Nkrumah was agitating for self government he told him; Don’t do it, don’t let people suffer for nothing.

He spoke in his native dialect thus- “Mo nnye, mo nnye, Kwame, mika tam kese se mo nnye. We shall get self government within the shortest possible time.”

But he woefully failed when he organized his positive action and ended up in prison with tears in his eyes.

True to Danquah’s warning to Nkrumah, the colonial government brought in soldiers from Nigeria who beat us up and, in the process, killed a pregnant woman in Accra. At the end, Nkrumah was sent to prison.

While in prison, Nkrumah smuggled letters from prison through the first black Prison Officer, Mr. Lokko to Gbedemah to beg the governor to allow him to stand for elections when he himself had shamelessly condemned constitutional governance.

Unfortunately, Mr. Lokko was caught smuggling Nkrumah’s second letter and was dismissed from the Prison Service under the same constitution.

When the letter got to the governor, he consulted the main opposition leader, Dr. Danquah and the UGCC on the issue for their opinion.

Dr. Danquah and the others, being democrats and having pity on Nkrumah, gave their approval for Nkrumah to contest the elections. Kwame Nkrumah could not even remember Mr. Lokko who helped him to be elected to power.

He left Mr. Lokko to suffer with his family at home till he died.

He was later to arrest Dr. Danquah, his former leader and Obetsebi Lamptey both of whom died in prison.

He also arrested the man who clothed and fed him, Blankson Lartey.

Also arrested were two of the big six, Paa Willie and Ako Adjei. These were all colonial prisoners who fought for our self government.

He jailed Dzenkle Dzewu whose house the Committee Youth Organization (CYO) which turned into the CP at Saltpond, was formed . Mr. Krobo Edusei described him as “the most dishonest man.” Nkrumah’s own cousin, Obed Andoh said Nkrumah was a swindler who cannot write a book that could fetch him a penny and that the said book he claimed to have written was actually written by one Abrahams.

These appeared in the NADECO report. Kweku Boateng as well called himself and colleagues in Nkrumahs government gaping sycophants.

I believe that Ghanaians have also been ungrateful to this brave, quality and brilliant Akim Abuakwa constitutional fighter who deserve all the praises as the real Osagyefo. It was he who paved the way for our present freedom through constitutional means.

Danquah had so much respect for the laws within the constitution that he shed tears when Nkrumah overthrew the Habeas Corpus law, sacked the judges and appointed his own people to suit his wicked dictatorial policies.

His wicked policies sent the following aged persons to detention without trial.

Detainees from Kumasi include Baffour Akoto over 66 years, Opanyin Kyekyere over 82 years, Opanyin Kwasi Duah (Konongo Odumasi) over 90 years, Asibri from Bawku who was suffering from stroke was also detained while he was over 70 years.

While in Accra, Jacob Fulani and other CPP men kidnapped Henry Thompson, Carl Reindorff, Oti Ankrah and Oku Glover in broad daylight and took them to the CPP headquarters.

They were mercilessly beaten with blood flowing all over thier bodies and were going to be dumped into the slave dungeon beneath the Osu Castle when white Superintendent of Police, Loy Jones, led a platoon of policemen to search the room at the CPP headquarters where these kidnapped persons were discovered. Jacob Fulani and others were jailed for this crime.

This is not a story. It is a true fact.

The present generation must be taught the true history of the Gold Coast that it was not Nkrumah who fought to attain self government for the Gold Coast but rather Dr. J.B. Danquah and his friends Akuffo Addo and Obetsebi Lamptey and others.

He only entered the scene to reap the rewards of the struggle.

Why is the University of Ghana, Legon not named after Dr. J.B. Danquah, who fought for it to be built in the then Gold Coast?

Dr. Danquah and the late Ashie Neequaye, General Secretary of the Cocoa Farmers Union in the British Colonies, helped to establish the Cocoa Marketing Board. J.B.’s effort through Sydney Abrahams helped to build the Accra Sports Stadium. Obetsebi’s evidence against Imray’s massacre of Sgt. Adjetey, Odartey Lamptey and Cpl Attipoe in 1948 brought about the drafting of a new constitution for self government.

Danquah, Obetsebi and others debated on it at the Legislative Council as a challenge to the British ruling government.

Nkrumah was not among them. Dr. Danquah at a point wrote a constitution in a record time of 24 hours with dexterity, assiduity and presented it to the colonial government.

Nkrumah shamelessly named the Gold Coast, Ghana. But we all know this was Dr. Danquah’s discovery through his research. This shows clearly the work of the great son of the Gold Coast.

That was J.B.’s constitutional achievement through patience and a noble fight for our independence for all Gold Coasters, and not for his personal aggrandisement.

Therefore, so long as constitutional rule remains in Ghana, J.B. Danquah’s efforts and achievements shall remain with the Gold Coast-Ghana.

For as the saying goes “he who lives only for himself will soon be forgotten, but he whose labours are directed to the perpetual benefit of the people or community, may well lay claim to immortality as his reward.”

If Ghana’s independence was attained through positive action then Kwame Nkrumah, originally known as Francis Kofi Weah, was the winner and the facts should remain so.

But if our independence was attained through constitutional means, then J.B. Danquah was the founder of Ghana and master fighter for our freedom and all praises should be duly accorded him and our history board must be cleaned.

Communist historians with false history books must be replaced with clean and honest history to reflect the true picture of our homeland. J.B. was later to moan: “ma do ama mmoa adi.”