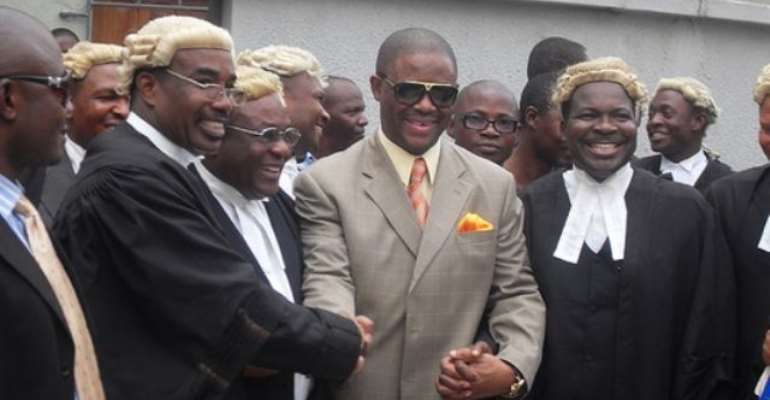 The alluring of Isa Pantami’s porridge and the treachery of Femi Fani Kayode has exposed the monumental naivety and tactlessness of IPOB and I have no apologies about my views.

In the wake of the avoidable arrest of the leader of Indigenous Peoples of Biafra, Nnamdi Kanu in Kenya, and the subsequent extraordinary rendition legal jargons that has little place in international relations, IPOB High Command listed some alleged Igbo traitors and changed the list about five times.

Originally Kenya based Iyke Mbaise,Senator Ifeanyi Ubah and Oil Magnate Emeka Offor was in the list of those who betrayed Nnamdi Kanu. Later the list included Ex-CBN Governor Charles Soludo, Governors Nyemson Wike(Rivers ), Hope Uzodimma(Imo )and Willie Obiano (Anambra ) were added. Minister of Labour Chris Ngige and Anglican Archbishop of Enugu Emmanuel Chukwuma made the list. This list was changed five times with names being added and deleted after proper settlement, yet the Traitor-in -Chief by name Femi Fani Kayode did not make the list until the man jumped ship and joined Buhari’s men in Aso Rock. This is foolishness of the highest order.

This is the third time in my writing career that I am ascribing foolishness to activities of my Igbo people. The first was during the 419 flag off of Second Niger Bridge by former President Jonathan in a piece titled ‘Fraudulent Construction Of 2nd Niger Bridge – Another 419 On The Igbo Nation’ and a follow up titled ‘Auctioning Of 419 Second Niger Bridge And Jubilation Of Igbo Fools’ which the APC leaders used variously in their campaigns. In the picece I warned that :

“According to the terms of this fraudulent business, the project is a Design, Finance, Build , Operate and Transfer (DFBOT) model to cost N117 Billion with the Federal Government contributing a paltry N30 billion naira while the consortium will raise the rest of the funds and thereafter hold the Ibo People to ransom by collecting a 25 year toll tax for the rest of the funds offshore”

The second time in the piece titled, ‘Azikiwe, Ironsi,Nzeogwu, Ojukwu Gave us One Nigeria: Igbos Should Stop Blaming Others for Their Woes’ and I called it an act of foolishness by heaping of all the blame of One Nigeria on Ahmadu Bello, Tafawa Balewa, Obafemi Awolowo without revisiting the roles of Azikiwe, Ironsi, Nzeogwu and Ojukwu in securing the unity of Nigeria and foiling a revolutionary coup Nigeria.

It is monumental tactlessness and naivety for IPOB High, Middle or Low Command to expect anything from Femi-Fani Kayode. Olusegun Obasanjo, Former Head of State have already given a dossier on FFK and said that the man follows wherever food is. Obasanjo said, “Femi Fani-Kayode is my boy. Provide him food, he will eat and then sing for you. He’s a smart boy.” He gave the recipe for the man, yet IPOB will not listen.

Former Governor of Imo State Rochas Okorocha also described Fani Kayode as a spoilt child who has never suffered for anything. According to Rochas “Again, there is obviously a very wide gulf between a man who has succeeded in every segment of life through the dint of hard work and, indeed, by God’s grace, and someone whose only claim in the society or his only meal ticket is the late father’s name”.

Yet IPOB never listened. They arrogated to themselves superior intelligence that when people who are on the ground gives reliable information, they jettison it for propagandist fantasy and day dreaming.

IPOB’s hatred for Buhari relaunched Fani Kayode after he lost out politically in the wake of ouster of Jonathan in 2015. Jonathan had earlier abandoned him since 2010 and a year to his re-election, he was rehabilitated and was the campaign spokesman for the PDP.. During 2019 elections, Atiku Abubakar kept him at arm’s length. Therefore FFK’S new found fame was due to his hate filled description of Buhari, Fulani, Islam and APC, and he found the IPOB mob cheering, praising, adulating and hero-worshipping him.

In the process, he obtained the names, phone numbers and all the secrets of IPOB. He co-concocted the theory of Buhari being Jubril of Sudan, supported a monumental fallacy and IPOB mob cheered on. He laid curses on all Muslims in Nigeria and caused Igbos to see Muslims as evil persons, and IPOB mob cheered on. He instigated Igbos on hating spree towards anything North of Nigeria, and supported atrocities meant to provoke Igbos and Hausa-Fulani into another Civil War and IPOB Mob cheered on.

He obtained all the secrets of Nnamdi Kanu and IPOB High Command, DOS and IPOB Mob cheered on. He goaded Nnamdi Kanu’s followers to go after security agencies and lot of them and innocent Biafrans were tortured in various detention cells, until the Supreme Commander himself was arrested, humiliated and bundled back to Nigeria in handcuffs.

Mission accomplished Fani-Kayode moved on. He has joined the camp of the people he instigated IPOB to fight. Who is the fool now, FFK or IPOB?

The secrets of IPOB,Nnamdi Kanu, Kalunta Kanu, Edozien Madu, Emma Powerful and other IPOB Chieftains are now subject of discuses under plates of TuTuwo Shinkafi, Tuwo Masara with Miyar Kuka and Miyar Wake at Isa Pantami’s dining table. Governors Matawalle and Yahaya Bello are now the custodians of IPOB secrets, the secrets were probably so salacious that they discussed it from 8pm when the dinner started till 3am, and the secrets of IPOB is handed over to the North.

In 2015, while seeking the release o f Nnamdi Kanu, I warned IPOB publicly to discontinue with hate speeches, as it is pitching Igbo against the rest of Nigeria, it was until 2020 that IPOB decided to extend hands of fellowship to elements in the North.

In same 2015, I warned IPOB that the earlier Tompolo alliance with the body to make Nigeria ungovernable for Buhari has collapsed, because the Commander of Camp 5 has decided to allow Buhari be. It took the battle between Sylva and Dickson for Tompolo Buhari alliance to crumble and I explained iagain in January 2016 in the piece ‘War in the Creeks as Buhari/Tompolo Allance Crumbles’ where I warned that

“Tompolo had boasted to groups of people two months before the renewed Biafra protests of November 2015, why he cannot support Kanu when a big masquerade called Buhari had already begged him to pipe low. At that time Kanu was still posting his hate messages from London,Therefore, before that Biafran struggle too off, many ingredients were already compromised, including Tompolo factor. Many persons had informed me of Tompolo’s position of the Biafra agitations and I warned those relying on his support to go and sit down and support the Change regime because an ingredient in the arms struggle had already opted out in return for government favors and protection. The Buhari they called old, sick, brain dead had shown that he is in fact an expert strategic planner than his numerous loud mouthed critics”

I warned IPOB privately since 2017, that Buhari is not Jubril and that the lies is giving them negative publicity internationally, they abused me until the Arise TV Interview, where it dawned on them that the man in Aso Rock is the same Muhmmadu Buhari who overthrow Shagari in 1983.

I warned IPOB publicly in December 2019, at the promptings of Dr Chukwemeka Ezeife, to collect Permanent Voters Card PVC and participate in 2019 election, if they want any change; they abused me and claimed there will be referendum in June 2019. By the time Atiku shook his body well, IPOB asked their followers to vote for PDP, and their followers have no PVC to help Atiku and Peter Obi.

I warned IPOB in July 9th that Nnamdi Kanu is slated for assassination and sundry embarrassment, and they dismissed the warnings, claiming the Supreme Commander is not assailable, and the man was bundled back to Nigeria eighteen days later.

I warned IPOB privately that the British establishment will be happy to see Nnamdi Kanu in jail, and they called all sorts of names until the Supreme Commander was bundled back to Nigeria and Buhari and Kenyatta were invited to London for Educational Summit when Igbo activists were theorizing about extra-ordinary renditions.

The worst is the treachery of Femi-Fani Kayode. The man he advised, confused, mentored and instigated in is DSS cell while the Chief Adviser, Chief Instigator, Chief Mentor and Chief Supporter is enjoying Pantami’s Porridge.

Edwin Clarke, Aniko Briggs and Asari Dokubo, Kemi Olunloyo, Aisha Buhari former allies and sympathizers of IPOB have abandoned them and moved on with their lives. These people have seventy percent of their supporters from the IPOB camp but being intellectuals, they refused their independence to be beclouded by tactless statements, and for toeing a different mindset on certain issues, they became enemies to IPOB.

FFK one one occasion wrote on his facebook page in 2017 that , “The Buhari government is evil, weak, incompetent, sectional, bloodthirsty, genocidal, wicked, divisive, mendacious and bereft of any integrity or intellectual pretentions.

“This is a government whose sole intention is to turn non Hausa-Fulani Nigerians into second class citizens and slaves.

“They protect the genocidal maniacs, the killers and the aggressors and they persecute, torment and traumatise the victims of aggression.

“Whether it be Agatu, Ile-Ife, Southern Kaduna, Enugu, Abia or anywhere else the story is the same: the victims are locked up and the murderous barbarians and savages that killed them are rewarded.

“The Buhari administration have come to do nothing but to kill, steal and destroy. Under their watch more Shiite Muslims and Christians gave been butchered than at any other time in our entire history outside the civil war.

“They are a curse. They are an affliction. And the truth is that they are worse than Hitler’s Nazis.”

The IPOB mob fell over them in praising the above remarks, and they cheered him to highest heavens, replicated it in all their handles and thanked Chukwu Abiama for such a savior.

Before the 2015 elections, another post by him elicited much comments by IPOB High Command, with Uche Mefor and Nnamdi Kanu echoing it. FFK said “We believe that it is a struggle between light and darkness. We believe that General Buhari represents the darkness and that President Jonathan represents the light. We believe that General Buhari represents a return to an ugly past which is best forgotten while President Jonathan represents our hope for a greater and better future. We believe that the APC, on which platform General Buhari is contesting the presidential election, represents everything that is unholy and unwholesome in our society and that the PDP represents all that is decent and goodFemi Fani-Kayode is my boy. Provide him food, he will eat and then sing for you. He’s a smart boy.”And we also know that spoilt and over pampered children do not know what it takes to have self-discipline and respect for others,”

IPOB should have Think-Tank. Their friendship and alliance should be issue based. Every enemy of Buhari is their friend and every friend of Buhari is their enemy. Now that Buhari enjoys the confidence of the international community on account of his corrupt free personal lifestyle (though corruption still persists among some of his aides), will IPOB turn against the world bodies. Tomorrow, when Reno Omokri and Shehu Sani abandon them again like Fani-Kayode, the wailing will continue.

It is a disturbing moment for me because Femi Fani ayode have used IPOB to launder his image and relaunch himself into the heart of Buhari’s men and Pantami’s Porridge , leaving IPOB in a state of avoidable shock and suspicion.