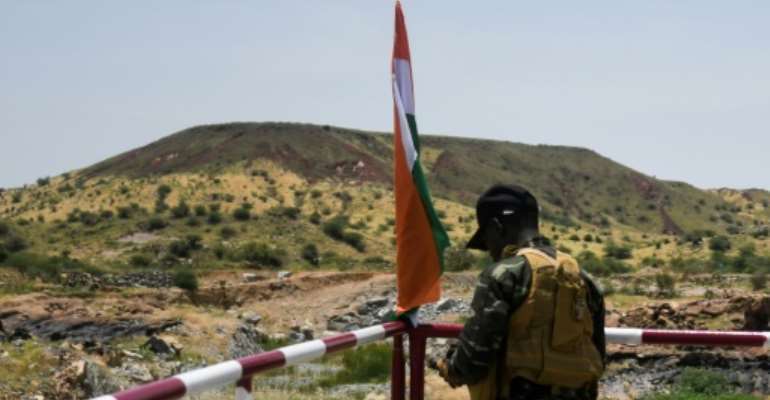 The Kandadji dam project is located in the restive 'three borders' area of Niger, but has so far been spared jihadist attacks. By Boureima HAMA (AFP/File)

In a busy construction site, soldiers armed with guns watch over workers as Niger speeds up efforts to build its first hydroelectric dam to stem power shortages and food crises, despite security concerns in a restive area.

Long in the works and long delayed, the Kandadji dam project aims to free the world's poorest nation of its energy dependence on neighbouring Nigeria and boost agricultural production to try and end chronic food insecurity.

At the bottom of an enormous crater dug out with dynamite, excavators smash blocks of granite.

"Here, a major branch of the river has been drained -- it's here that the dam wall will be erected," says a Chinese engineer, his helmet tightly fixed.

"We are making good progress!"

In this huge Sahel state which is two-thirds desert, plans for the dam on the Niger river in the country's west have long been afoot.

In the 1970s, after a severe famine, General-President Seyni Koutche (1974-1987) nurtured the idea of providing Niger with a large-scale hydroelectric dam.

All the heads of state who succeeded him made this infrastructure "a priority", but the dam never saw the light of day.

A first stone was laid in 2008 under the presidency of Mamadou Tandja, but the political instability of the years that followed put a halt to the project.

Initially entrusted to the Russian firm Zarubezhvodstroy, the work has since been given to the Chinese company Gezhouba Group.

Already postponed many times, first to 2016 and then to 2023, the date to fill the reservoir behind the dam is set at 2025 according to the authorities, after further delays due to the Covid-19 pandemic.

According to the UN's Human Development Index, Niger is the poorest nation on Earth, ranking 189th out of 189.

With its 28-metre-high dam wall, it will have a retention capacity of 1.5 billion cubic meters, or 600,000 Olympic pools.

The project also entails the displacement of 50,000 people, of whom 7,000 have already been relocated, according to the Kandadji Dam Agency.

Now, "all the obstacles have been lifted (...) all the funding problems have been resolved. In a few months you will see the project taking shape," said Niger's President Mohamed Bazoum, who visited in mid-September.

Located some 180 kilometres (112 miles) upstream from the capital Niamey, in the heart of the "three borders" area that also includes Burkina Faso and Mali, the project has thus far been spared from the jihadist attacks that regularly plague the volatile region.

But Bazoum promised to "increase the number of soldiers to enable" the site to run day and night.

An environmental impact study was completed in 2018 by the AfDB.

While other options such as solar or wind power were also evaluated, the report concluded that alternative energies could "not meet large-scale energy needs."

"The only solution that can solve the recurring problem of food insecurity in Niger is the Kandadji dam because there will be 45,000 hectares (111,200 acres) of land that will be developed to improve production," says Ousmane Danbadji, head of the Network of journalists for water and sanitation (Rejea) and an expert on the matter.

The dam agency forecasts that 400,000 more tonnes of rice, corn and vegetables will be produced each year in a country where 80 percent of the population lives off traditional agriculture, dependent on rains.

A 130-megawatt power station is due to be built in Kandadji, aiming to generate enough electricity annually to enable Niger to free itself from its energy dependence on neighbouring Nigeria.

Barely 15 percent of more than 20 million Nigeriens have electricity, according to the Nigelec electricity company.