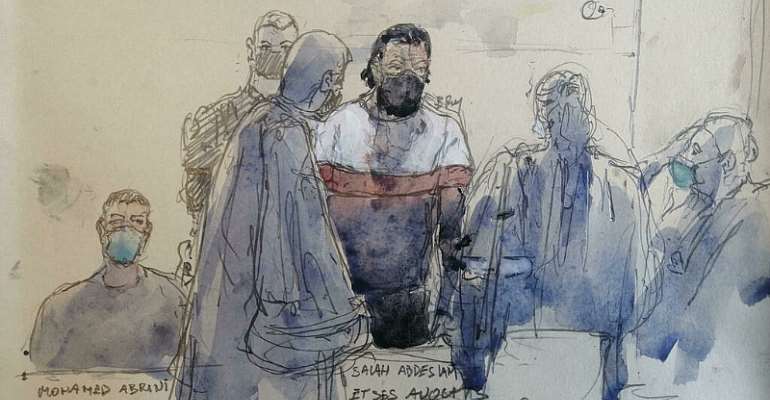 The eleventh day of the Paris court hearing into the terrorist attacks which killed 130 people in the French capital in November 2015 was devoted to the medical machinery which handled the bodies of the victims, and the frequently inadequate attention paid to the needs of grieving relatives and friends.

His task in November 2015 was to receive the bodies of those killed in the attacks, establish the identities of any victims not already formally named by the police, determine the cause of death, and recover any bullets or fragments which could subsequently serve as evidence.

Some parts of the job were easier than others.
The professor was very clear on the causes of death: all the victims except one died as a result of gunshot wounds inflicted by high-velocity projectiles fired from assault rifles.

The exception was the very first civilian to die, Manuel Colaço Dias, struck by the hail of steel bolts unleashed when one of the suicide attackers at the Stade de France detonated his explosive vest.

All seven perpetrators who died on the night of the attacks were killed by explosion. The one who failed to set off his own device in the final moments of the Bataclan police assault was killed by the blast wave from the vest of the other terrorist, just behind him.

Two attackers, Abdelhamid Abaaoud and Chakib Akrouh, escaped on the night. Both died five days later in a police raid on a building in the north Paris suburb of Saint Denis.

No evidence of knife wounds

Professor Ludes was emphatic in denying a rumour that has surfaced several times already in questions posed by the lawyers representing the families of victims. The medical-legal specialist said, clearly and without hesitation, that there was no evidence of knife wounds, nor had any body been deliberately mutilated.

There was not much to console the families in the rest of his testimony.

He gave a catalogue of the injuries suffered . . . heads, necks, upper bodies destroyed by the erratic movement of the projectiles, "typical of the impact caused by weapons of war".

Some victims had been hit once, others had multiple wounds. One man was shot 32 times.

The professor said that, in view of the massive injuries suffered, death had probably been very rapid for the majority of victims, many of whom would have lost consciousness almost immediately because of blood loss.

"I would say at least half the victims died within five minutes of being hit."

A technically more difficult part of the task facing Professor Ludes and his forensic teams was the identification of those victims which police investigators and doctors had been unable to name.

DNA comparisons had to be made between samples taken from the unidentified bodies, and samples from familly members who were still without news of their missing loved ones. It took time. Mercifully, such cases were few.

There were, in fact, ten incidents of incorrect identification in total.

In one tragic case, the initial police identification had been incorrect, resulting in an appalling situation in which a group of family and friends found themselves confronted by a body which was clearly not that of their lost beloved.

That raised the hope, subsequently dashed, that their "victim" might still be alive.

The episode obviously added a deep layer of outrage to an already overcharged emotional landscape.

Despite the professor's repeated apologies for errors of fact, perhaps unavoidable, and the frequent failures of tact by some members of his institution's staff in their dealings with the bereaved, surely avoidable, the hearing left a clear impression of what one lawyer called "the immense gap between the clinical world of medical expertise and the human grief of the families".