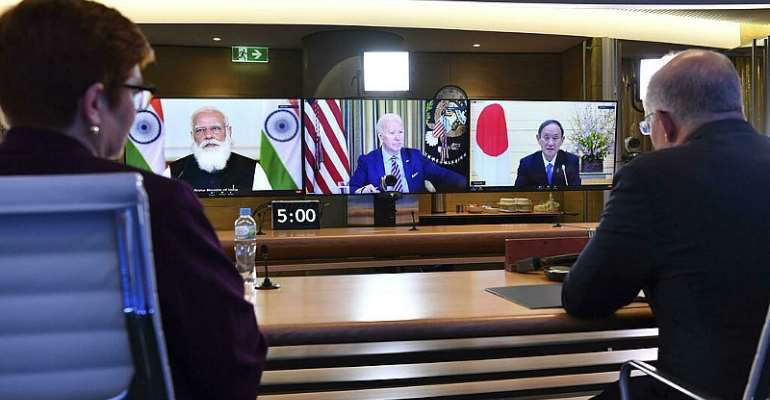 In a further sign of growing security cooperation between the United States and Australia – to the exclusion of France – the so-called Quad countries are meeting in Washington Friday to shore up their interests in the Indo-Pacific.

Japan and India are the other two countries that make up the Quadrilateral Security Dialogue, with Friday's meeting the first during which all four heads of state and government will be physically present.

The informal partnership is essentially a show of shared resolve in relations towards China, with Biden also meeting with British Prime Minister Boris Johnson beforehand.

French fury 'underestimated'
French anger at the loss of a lucrative submarine contract with France will be the focus of the Quad discussions, Delphine Allès, a political scientist at Inalco, the National Institute of Languages and Oriental Studies, told RFI.

“It seems that the United States and Australia did not anticipate the intensity of the French reaction and will therefore perhaps reflect on how to ease tensions and extend cooperation.”

Foreign Minister Jean Yves Le Drian and Defence Minister Florence Parly earlier said “the American choice to exclude a European ally and partner such as France” was a regrettable decision that showed “a lack of coherence”.

Meanwhile Rory Medcalf, head of National Security College at the Australian National University, said in a tweet: "The Quad summit is an opportunity to signal the importance of France and Europe in the Indo-Pacific.

"The Australian and US governments should include France and EU-specific cooperation proposals in the joint statement."

France has often been a non-Quad state that has increasingly cooperated with the group, particularly in terms of meetings or military exercises known as the "Quad Plus", Allès added.

Calming tensions
Tensions are easing, though, with French President Emmanuel Macron planning to send his ambassador back to Washington following a phonecall with US president Joe Biden that lasted half an hour.

The two presidents then issued a joint statement saying the situation would have benefited from open consultations between allies.

There was no word on whether France's ambassador to Canberra would also be returned to Australia.

The French company Naval Group, which lost the contract to build 12 Barracuda submarines for Australia, has said it would send the bill to the country “within the next few weeks".

Conflicting American and European responses to how to deal with China, whose influence in the region is growing, may redraw the global strategic map, analysts say.

“This looks like a new geopolitical order without binding alliances,” Nicole Bacharan, a researcher at Sciences Po in Paris, told The New York Times.

“To confront China, the United States appears to have chosen a different alliance, with the Anglo-Saxon world separate from France.”

Europe seeks seat at table
The European Union, having decided to join forces with France, wants to be associated with American initiatives in the region – not least because the Info Pacific is one of Europe's biggest trading partners, and is becoming the world's "new centre of gravity", says the EU's top diplomat Josep Borrell.

“After the meeting of the French and American presidents, Borrell met with Secretary of State Antony Blinken,” confirmed RFI's Brussels correspondent Pierre Bénazet.

“This was an opportunity for the head of European diplomacy to press the point home and to convey a message identical to that of France.

“He said we needed to work to strengthen transatlantic trust.”