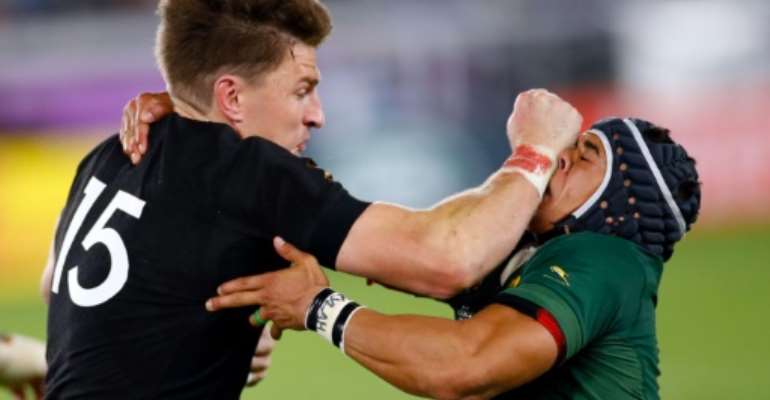 New Zealand and South Africa have an intense rivalry dating back a century. By Odd ANDERSEN (AFP)

The Springboks and All Blacks face off for the 100th time in Townsville, Australia on Saturday, extending an intense rivalry dating back a century.

It all began before a roaring crowd of 25,000 people at Dunedin's Carisbrook Stadium, nicknamed "The House of Pain".

The touring Springboks had lost only one of nine warm-up matches against New Zealand provinces and were up 5-0 at half-time.

But New Zealand bounced back with three unanswered tries after the break.

The Springboks would have to wait until 2008 to taste victory at Carisbrook, which closed two years later.

In 100 years of bitterly contested Test matches, only the 1937 Springboks have ever won a series on New Zealand soil.

The deciding match followed a spiteful build-up, with the All Blacks raising concerns about violent play when South Africa came from behind in the second Test to level the series.

The tourists went on to defeat the All Blacks in style, thrashing them five tries to nil in the series finale after producing a scrummaging masterclass.

Believing he had achieved all he could in the game, skipper Philip Nel is said to have retired by throwing his boots into the sea on the voyage back to South Africa.

By 1956, the head-to-head ledger between the teams was two series drawn and two won by South Africa, who had not lost a Test series to any team since 1896.

Desperate to dethrone them, New Zealand notched a 10-6 win in the first Test but panicked when South Africa won the second 8-3, with selectors calling up renowned hardman Kevin Skinner.

Skinner, a former amateur national heavyweight boxing champion who had not played a Test for two years, set about subduing the Springboks front row.

He started the third Test as tighthead prop and went to work on South Africa's Chris Koch, then switched to loosehead at halftime and did the same to Jaap Bekker.

Skinner maintained he threw only two punches during the entire match but whatever he did was enough to quell the Springboks, who went on to lose the fourth Test and give New Zealand a 3-1 series victory.

For the final Test in Auckland, more than 2,000 police -- about 40 percent of the entire national force -- fought against 7,000 protesters outside an Eden Park stadium ringed with razor wire.

Protesters dropped flour bombs on the pitch from a light plane, felling All Blacks prop Gary Knight with a direct hit to the head but failing to stop the match.

New Zealand won 25-22 but it was overshadowed by the powerful anti-apartheid message.

The All Blacks were red-hot favourites in the 1995 Rugby World Cup final but South Africa had a secret weapon in political prisoner-turned-president Nelson Mandela . By PHILIP LITTLETON (AFP)

The Jonah Lomu-inspired All Blacks were red-hot favourites in the 1995 Rugby World Cup final but South Africa had a secret weapon -- political prisoner-turned-president Nelson Mandela.

Mandela stunned a mostly white crowd of 62,000 at Johannesburg's Ellis Park -- and players from both sides -- when he appeared before kick-off wearing a Springbok jersey.

Lomu later said Mandela's presence and the crowd's reaction intimidated the New Zealanders, who never regained their equilibrium and lost to a Joel Stransky field goal in extra time.

Donning the green-and-gold jersey widely seen as a symbol of the apartheid regime was a huge gamble for Mandela. But it had the desired effect of fostering racial reconciliation in the fledgling Rainbow Nation and images of a beaming Mandela presenting the William Webb Ellis trophy to Springbok captain Francois Pienaar became iconic.

‘You can’t beat NDC in spreading lies, falsehood and propaga...
2 minutes ago

A/R: Am your Messi, kick me out from NPP and you'll suffer l...
2 minutes ago