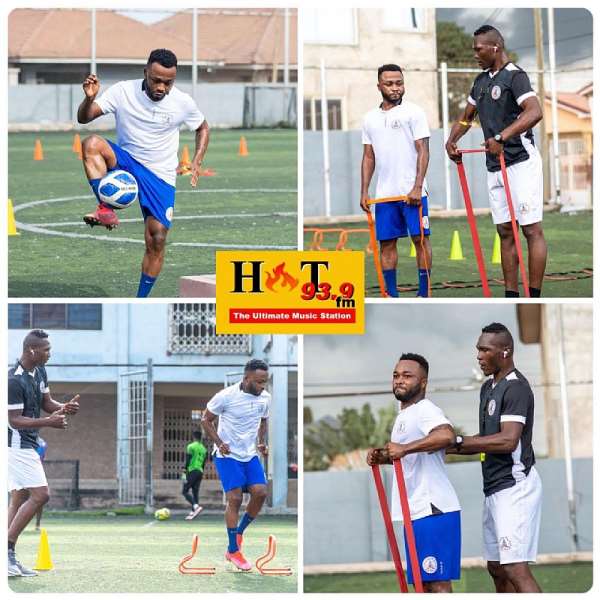 After helping Midfield dynamo and former Great Olympic's player Gladson Awako regain his fitness prior to the 2020/21 Ghana Premier league, popular Ghanaian Physical trainer and CEO of Train Like a Pro GH, Francis Totti Laryea better known as Totti Laryea has jumped to the rescue of the player again.

Awako who signed a new contract with Hearts Of Oak for the 2021/22 season failed to take part in the team's CAF Champions League first-round qualifier against CI Kamsar of Guinea on Sunday, September 19, 2021.

In a release issued by the Phobians on Tuesday, the club disclosed that the 2009 FIFA U-20 winner has been missing in action because he is experiencing some personal difficulties.

According to the club, it is expecting the former Great Olympics attacker to sort out all his issues and join his teammates to prepare for the upcoming assignment very soon.

Though the Phobians failed to reveal the actual problem the World Cup winner was facing in the statement, it is believed that the player was medically unfit - which has culminated in the loss of the requisite fitness he needs to play actively again.

But the 26-year-old Totti Laryea has jumped to the rescue of the player again. In a video sighted by this portal, the train like a Pro GH CEO is seen taking the 30-year-old player through a preseason powerful endurance training to regain his stamina.

Awako, in a post on his Facebook page, declared at the end of a live video where he is seen being trained by Totti Laryea that, “It’s not easy eh. I’m coming back strongly, don't worry. I’m coming..”

Watch how he is being trained in the video below.