In Guinea opposition bastion, hopes for a brighter future

By Laurent Lozano and Mouctar Bah 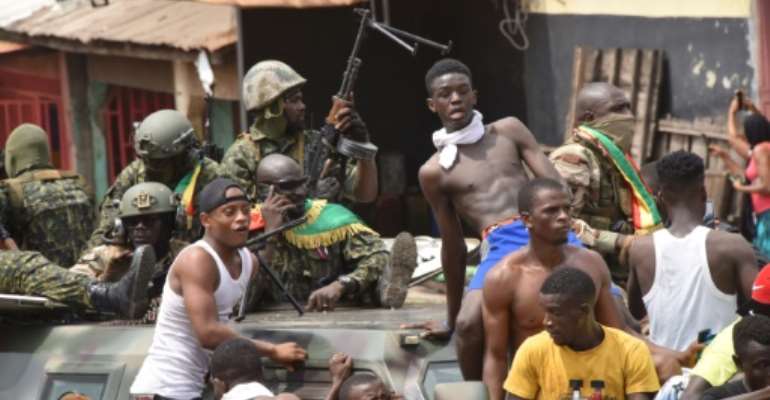 September 5: People in Conakry celebrate the overthrow of President Alpha Conde alongside members of the armed forces. By CELLOU BINANI (AFP)

Like many of his neighbours, Amadou Oury Barry celebrated this month when Guinea's army tore down a security post in his district.

Previously a detested symbol of president Alpha Conde, the military dismantled such outposts across the capital Conakry after seizing power on September 5.

Jubilation swept anti-Conde strongholds, including Barry's suburb of Wanindara, where many had viewed men in uniform as oppressors.

"At night they would go out and rob," said Barry, a 28-year-old taxi driver, leaning against a kiosk near a roundabout where security forces were stationed in the neighbourhood.

Wanindara had a particularly fraught relationship with the security forces under Conde.

Inhabited mostly by ethnic Fulani people, also known as Peul, the suburb frequently saw deadly clashes between security forces and protesters against a third term for the deposed president.

But last year, he pushed through a controversial new constitution that allowed him to run for a third term in October 2020.

The move sparked mass demonstrations in which dozens of protesters were killed -- including many in Wanindara and other Fulani-dominated suburbs. Conde won the election but the political opposition maintained the poll was a sham.

Souleymane Barry, a 40-year-old trader from the neighbourhood, told AFP that there had been more than 10 killings near the security post in Wanindara alone.

For many residents, the apparent antagonism of the Conde government also had an ethnic dimension.

"The Conde years divided Guineans," said Barry. "If you had a Fulani name, you couldn't get a job," he said.

Guinea's politics are mainly drawn along ethnic lines. Conde's party is largely backed by Malinke people, for example, and the opposition UFDG by Fulani people, although both insist that they are pluralist.

Analysts also argue that group allegiances rarely extend beyond politics, however, with most people living in harmony.

Maladho Diallo, an unemployed agricultural engineer, said Conde had pursued an "ethno-strategy" to divide Guineans for his own political benefit.

"Hats off to Colonel Doumbouya, because we were strangled," the 39-year-old added, reflecting a broadly held opinion in Wanindara.

After taking power, the coup leader cited alleged rights abuses and corruption under Conde, as well as Guinea's lack of development.

The nation of 13 million people is one of the poorest in the world, despite having abundant deposits iron ore, gold diamonds and bauxite.

But Doumbouya also made a plea for unity across communal lines. He urged Guineans "understand each other" in the aftermath of the coup, as well "to wake up and join hands" to better the country.

So far, acts such dismantling the security posts appear to have generated goodwill. Taxi driver Amadou Oury Barry said he believed in the new military strongman, for example.

"In everyday life, you don't have confrontations," said Rinaldo Depagne, from the International Crisis Group.

Rather, he explained, political parties reflect regional interests, which tend to fall along ethnic lines.

Depagne added that Alpha Conde "exacerbated tensions that were already there".

In one incident that drew criticism during last year's election campaign, for example, Conde gave a national address in the Malinke langue -- a departure from tradition, as French is Guinea's sole official language and is used for major speeches.

Scores of people were killed in clashes after Conde announced he would bid for a third term in office. By JOHN WESSELS (AFP)

Emmanuel Bamba, president of the Guinean League for Human Rights, agreed that ethnic relations are mostly harmonious, but noted that it is "undeniable" that the country's politics are clientelistic.

He added that the junta's desire to eradicate ethnic divisions in politics "is an absolute necessity".

However, not everyone agrees that Doumbouya will be able to achieve consensus.

"Traditionally, the longer the transition agenda lasts, the more the politicians will play dirty," he said.