By Timothy A. Carey - The Conversation 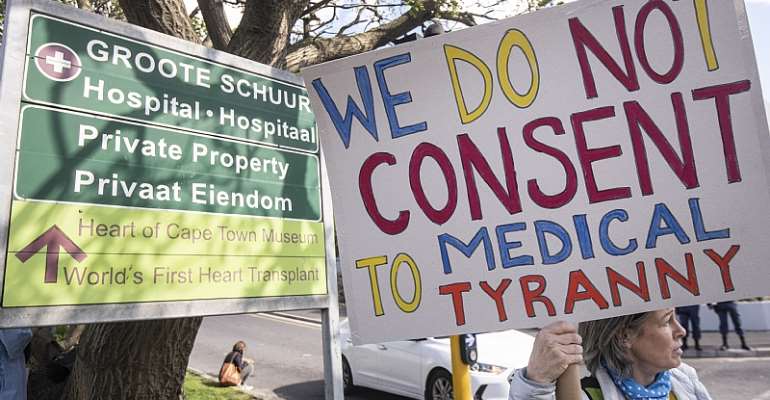 As the protracted global battle with SARS-CoV-2 continues to rage, objections to the measures being taken to combat the virus are increasing. Protests have been reported in countries such as the US, the UK , Australia , Thailand, South Africa, France, Italy, and Greece. In some instances, the protests have become violent resulting in injuries and arrests.

The core of the objections, whether they are about vaccinations, lockdowns, social distancing, or mask wearing, seems to concern an apparent erosion of personal liberty. Liberty, or freedom, has been fiercely pursued and protected throughout history. Some of the greatest accomplishments in social living have been realised through the introduction of policies and laws that provided freedoms to those who were previously marginalised and persecuted. Efforts to address colonialism, racism, and inequity are relevant examples. To be sure, there is still a long way to go but progress, however slow and punctuated it may be, is being made.

SARS-Cov-2's unrelenting assault on our health status and systems could be another opportunity to leap forward in our understanding of liberty and social living. Advancing the freedom of all might be accelerated if the relativity of freedom was more readily acknowledged and explicitly discussed.

Freedom, in its simplest terms, is being able to do what you want. The key to freedom, then, is about what you want, what I want, and what we all want. It is about being in control . It is about pursuing the goals that are important to us. Control is concerned with agency and unsurprisingly, both agency and freedom have been identified as important to health. Health, can in fact, be understood as a state of being in control .

The relativity of freedom is unavoidably inevitable. If I am paid a sufficient amount of money, I am free to save up to buy a house. Wanting to buy a house, however, necessarily impacts on my freedom to spend money on other things. If I want to pursue part-time study to get a better job, then my freedom with regard to how I spend my leisure time is immediately curtailed.

People, then, limit their own freedom by the goals they have, but their goals can also limit other people's freedom. When slave owners had the freedom to buy and sell people as slaves, they were undoubtedly doing what they wanted but they were also interfering monstrously and deplorably with the freedom of the people cast as slaves.

More recently some jurisdictions have determined that people do not have the freedom to intentionally transmit HIV through unprotected sex. Similarly, a person does not have the unrestrained freedom to drive a car through a busy shopping mall and annihilate the freedom of shoppers.

The daily news is replete with examples of people having their freedom removed because of the way they interfered with other people's freedom. Freedom's relativity is inherently entwined with our nature to be in control. Fundamentally we are driven to control our circumstances and conditions. During our controlling, however, from time to time we will, either inadvertently or by design, thwart the controlling of others. It is easy to appreciate that the anger of the COVID-19 protesters arises from the curbing of their ability to control where they go, when they go, and how they go there.

the childhood of the human race is far from over. We have a long way to go before most people will understand that what they do for others is just as important to their wellbeing as what they do for themselves.

Joseph Stiglitz, the Nobel prize winning economist, applies the same thinking to the inequity in wealth distribution. He points out that increasing inequity is the flipside of shrinking opportunity. Shrinking opportunity is nothing more than a constriction of the ability to control. He reminds those who are at the top 1% of the money pile that their fates are interwoven with the fates of the remaining 99%. This fact prompts him to suggest that “looking out for the other guy isn't just good for the soul – it's good for business”.

In a cruel twist of fate that might actually reveal the secret to successful social living, we have our greatest freedom when we protect the freedom of others . Safeguarding our own freedom as a priority will lead to an endless round of pushback as others seek to do the same. As we increasingly promote the freedom of others, particularly the marginalised, vulnerable, and oppressed, we can begin to relax a little and enjoy the more equitable, fairer, and socially just world we are creating.

Freedom is never absolute. Some freedoms are always enjoyed at the expense of other freedoms. We will never be free of COVID-19 until we are all free. Does that mean some other freedoms will, from time to time, be suppressed? Undoubtedly. Necessarily. And the foregoing of those freedoms helps the freedom to live in a healthy, connected, and contented social environment to flourish.

Timothy A. Carey does not work for, consult, own shares in or receive funding from any company or organisation that would benefit from this article, and has disclosed no relevant affiliations beyond their academic appointment.