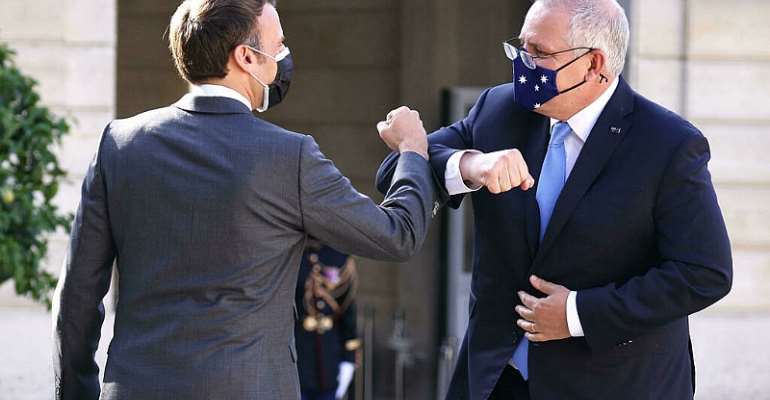 Australian Prime Minister Scott Morrison says he has tried to arrange a conversation with French President Emmanuel Macron but has been fruitless so far, a week after his cancellation of a major submarine deal sparked a diplomatic row with Paris.

Speaking in Washington on Wednesday, Morrison said he would be patient in rebuilding ties with France.

Paris has recalled its ambassadors from Canberra and Washington, saying it was blindsided by Australia's decision to build nuclear-powered submarines with the United States and Britain rather than stick with its contract for French diesel submarines.

Macron and US President Joe Biden spoke by telephone on Wednesday to smooth relations, and France said its ambassador would return to Washington next week.

However Morrison, who is in the United States for a series of meetings this week, said he had tried to arrange his own call with the French President but had not yet been successful.

"Yes, we have. And the opportunity for that call is not yet. But we'll be patient," Morrison said after meeting U.S. lawmakers to discuss the submarine deal and a new security alliance with the United States and Britain dubbed AUKUS.

Morrison reiterated he understood France's disappointment and noted the cancellation of the submarine contract, initially valued at €30billion and more recently at €45billion, meant the issues were different to those between Washington and Paris, and they would take more time to work through.

"I look forward and when the time is right and when the opportunity presents that we will have a similar discussion," he said.

Morrison said both the deal for Australia to establish a nuclear-powered submarine fleet and the new Australia, UK, U.S. tripartite security alliance (AUKUS) had received bipartisan support during his meetings with U.S. lawmakers and officials.

Meanwhile,  Australia denied on Thursday an assertion by France that Canberra had re-committed to a €5billion contract to buy French submarines in a letter sent just before it announced it was buying subs from the United States and Britain instead.

Earlier this week, France's Armed Forces Ministry spokesman wrote on Twitter that Australia had sent a letter to France on the day of the AUKUS announcement, stating satisfaction with the progress of the program.

"In short: forward to launching the next phase of the contract," spokesman Hervé Grandjean wrote.

However Australia's defence department on Thursday said the letter, which it said was sent the day before the announcement, included no new commitment.

"This correspondence did not refer to or authorise commencement of the next phase of the programme, which remained subject to the announcement of decisions by the Australian Government," a Department of Defence spokesperson said in a statement to Reuters.