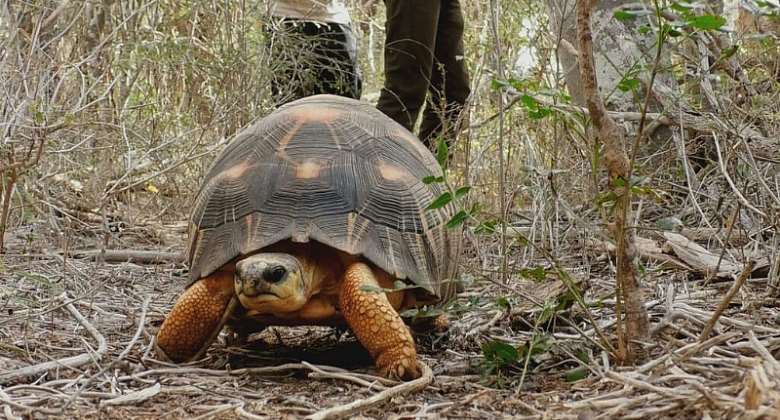 The animals -- named after the yellow lines that spread out from spots on their shells -- have been moved from a rescue centre in Tsihombe, southern Madagascar, to a six-hectare patch of forest whose location is being kept a secret for their safety.

It's thought the tortoises are crucial to the ecology of the region's unique spiny forests, already under threat from charcoal-makers and slash-and-burn agriculture, because they disperse seeds.

The first 1,000 are being kept in a pre-release enclosure, similar to acclimatization pens used to reintroduce elephants and other game to national parks on mainland Africa.

GPS trackers
It will encourage “site fidelity”, meaning the tortoises won't stray far once they're out, said Rick Hudson, president of the Turtle Survival Alliance, the organization behind the project.

“If you have a protected area with a supportive community, you want them to stay there when they're released,” he said.

The TSA is currently looking after around 25,000 radiated tortoises in secure facilities in Madagascar. All were confiscated from poachers who trapped them for meat or for the illegal pet trade.

The first thousand to be released will be microchipped. Around 30-40 will also have GPS trackers attached to their shells to help the team monitor where they go and how far.

Found only in Madagascar, radiated tortoises were once believed to be the most abundant species of tortoise on the planet. But their numbers are estimated to have dropped from 12 million in 2000, to just three million now.

“It was that rate of decline that scared us,” Hudson told RFI.

Devastating drought
He said the trafficking of juveniles for the pet trade and the hunting of the adults for meat by locals was a “one-two punch” for the population.

“You're taking the adults out, and then you're taking away the ability of the population to recover by removing the juveniles.”

In 2018, more than 10,000 radiated tortoises were confiscated in Toliara, a town on the south-western coast of Madagascar. Six months later another 7,000 were seized. It's believed they were due to be taken to sea aboard small boats to one of a number of Chinese fishing vessels operating off the west coast of Madagascar at the time.

Fending for the 25,000 confiscated tortoises this year hasn't been easy, though.

At one of its conservation centres the TSA team had to erect 200 shelters to protect the animals from the burning sun after the trees shed all their leaves in response to the worst drought experienced there in 40 years.

Forest regeneration
Tortoises are grazers, and with most grazing gone, the only thing available for them to eat was an invasive species of cactus.

“There was nothing else growing. People were starving, animals were starving,” said Hudson. “This has been a very challenging year for us.”

The drought in southern Madagascar has been linked to climate change, which could also be driving up the illicit poaching of tortoises, said Herilala Randriamahazo, director of TSA's Madagascar programme.

Most of the tortoises confiscated over the past two years have been adults, and in the countryside the consumption of tortoises has continued and even increased in some areas, he told RFI.

“Tortoises contribute to forest regeneration (by eating and dispersing plant seeds),” Randriamahazo explained. “If the radiated tortoise species disappears, it could have a significant impact on the flora in the southern part of Madagascar.”

Extinction in the wild
The poaching scourge continues, and some of it is brazen. As recently as February more than 800 radiated tortoises were seized from poachers who were keeping them at a village less than a kilometre from a protected area.

Dismantling the network of traffickers responsible for the animal's decline will be key to their survival.

But for now their rescuers are putting their faith in the strong relations built up with the communities surrounding carefully-selected release sites.

This, they hope will keep the radiated tortoise in the wild where it belongs, unlike its close relative the ploughshare tortoise, which Hudson said has been poached to extinction in the wild and is now dependent on captive programmes for survival.

“We don't want the radiated tortoise to end up in that situation,” he said.