In the midst of the horror, Bataclan heroism has its golden moment 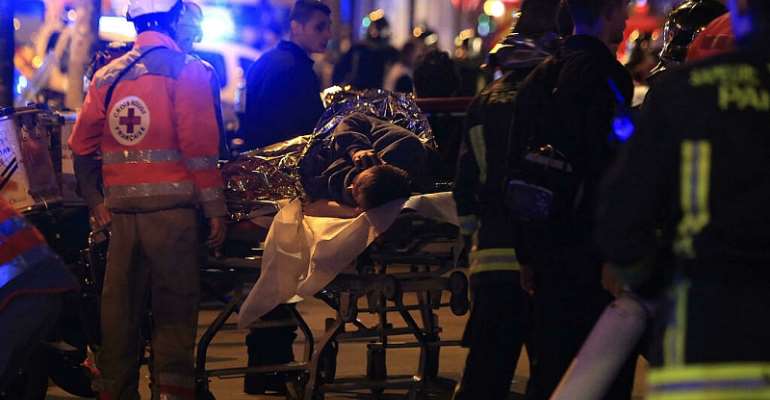 At a criminal trial centred on the violent deaths of 130 people, there are no good  days. But there are less bad ones. On Wednesday, after nine hearings devoted to the catalogue of cowardice and horror, heroism finally had its shining hour.

I can't tell you his name. As a serving police commissioner, the witness is protected by anonymity.

He is the man who, armed with a service hand gun and accompanied by a single colleague, chose to enter the Bataclan while the massacre was still in progress.

As the court president Jean-Louis Périès put it to the witness, "your action obviously saved many lives".

The commissioner, who began his evidence by speaking for his colleagues in the Paris Anti-criminal Brigade, saying how much they regretted the fact that they had not saved more people, made no response.

Apart from the friendly football match between France and Germany at the Stade de France, there were no pressing security concerns.

At 21h25 the police received a report of an explosion at the football venue, initially described as a mortar bomb. There was also "a shooting in Paris". Not extraordinary on a Friday evening.

When news came in of a possible second explosion at the football match, the witness and his partner decided to drive to the Stade de France to see for themselves. On their way northwards, they received a succession of reports of shootings at bars and restaurants in central Paris, then of an attack in progress during a concert at the Bataclan.

That was where they headed.
When they reached Boulevard Voltaire, just in front of the music venue, they immediately heard shooting. There were two or three bodies lying on the pavement in front of the building.

As the witness and his service partner advanced towards the entrance, the swing doors burst open outwards and a "solid mass of people, 20 or 30, came rushing out, trying to escape. They told us to run."

In the few seconds that the doors remained open, the officer was able to see one of the terrorists, subsequently identified as Ishmaël Omar Mostefaï, and glimpse his semi-automatic weapon. With a service pistol and a lightweight bullet-proof vest, he knew that he was hopelessly under-equipped.

"We heard shots from inside, single, spaced out, as if they were executing individuals. We entered the vestibule.

'A carpet of human bodies'
"There are no words to describe what I saw. In the harsh glare of the stage lighting, there was a carpet of bodies. I wondered how they had managed to kill so many people in such a short time. There was absolute silence.

"Then we heard Samy Amimour shout 'lie down' at a survivor, the first person standing upright that I had seen. He pointed his weapon at the man.

"I took my shooting position and aimed for the body. I thought the head would be too small a target at 25 metres. I fired four times, my partner twice. Amimour fell. While we were re-loading, there was an explosion. We were hit by a hail of human flesh. I thought one of the other terrorists had thrown a grenade. Amimour had disappeared."

After a brief check on the situation outside, the witness and his unit began the business of evacuating the injured.

Then the two police officers heard the shooting begin again.

"We had to go back in."
Knowing what they would face, the two men sent phone messages of farewell to their families.

"That was the worst time," the witness continued. "We had to wait on the edge of the main floor. It would have been suicide to go any further. Firing was now coming from a side balcony, above our position. We knew people were dying just a few feet from us, and there was nothing we could do.

"A voice cried out from the floor 'what are you waiting for?'"

And then the heavily-armed Rapid Intervention Brigade arrived. While the terrorists retreated along a narrow corridor on the first floor, herding a dozen hostages before them, the witness continued to help the injured, dragging and carrying those who could not stand.

"Each victim needed two or three officers to lift, their clothes were so soaked in blood. And we were now all wearing our heavy emergency equipment.

"One of those we lifted out was a five-year-old boy, still wearing his anti-noise ear protectors." The child survived. Through their lawyer, the boy's parents thanked the officer giving evidence for saving their son's life. He smiled but said nothing.

An impossible task
The story was then taken up by Commissioner Christophe Molmy, who led the final assault, killing the two remaining terrorists, freeing the hostages, without any further civilian casualties.

Before going into the building to confront the killers, Molmy was asked by the Paris police chief if he thought the operation would go smoothly. "No," he said. He expected to lose half his team.

Molmy told his men to limit the use of their weapons, for fear of hitting hostages. They advanced behind a steel shield on wheels, until the 80kg device toppled over a step and left the column of men exposed. They continued to advance, using stun grenades as cover.

Shot while descending a spiral stairway to the Bataclan stage area, one terrorist set off his explosive vest, killing himself and destabilising the other, who appeared to lose his grip on the detonator. He was shot dead and fell, still wearing his unexploded jacket, just outside the storeroom where thirty escapees had taken refuge.

The officers had to evacuate the survivors. One of the police team voluntarily lay on top of the body of the dead attacker so that those in the storeroom could step over him in relative safety. The policeman would have taken the blast and the shrapnel if the notoriously unstable explosive had detonated.

Asked by the court president if the man's action had been determined by some police protocol, Commissioner Christophe Molmy smiled and said "no, he just did it himself".

In this ritual confrontation between barbarism and justice, honour and heroism have had their moment. There were no comments from the prisoners.