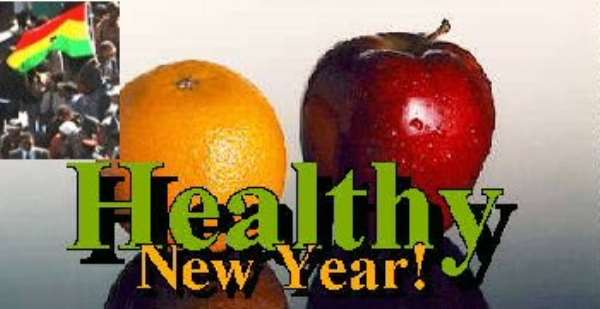 2001 Review & Awards Lesser men would have thrown in the towel, not me. This is my story After living 8 years in Nii Darko's Camp (NDC), the family got fed up and moved to Nana Pataku's Palace (NPP). The heads of the camp (Atta Papa) and Palace (Agya) shared a common name – John –and that's about all they had in common. To calm Atta Papa's nerves, he was made an Eminent Person, thanks to a nun, who won a dynamite for his good work with the Unidentified Neutral Observers (UNO). No sooner had we moved in with Agya, than we unearthed a 2.3 "train ma” cedis debt. Agya could not handle the debt and unilaterally declared us His Indebted Poor Children (HIPC). For services provided, my uncles at the camp, demanded an Everlasting Supply of Bread (ESB). With the increase in gas & utilities rates, we knew this was a tall order. The Camp accused the Palace of hunting witches in their backyard and playing home and away games at the Kokofu Park. The Palace maintained they were not in search of witches, but CO-eruptions at the Camp. They also refuted the kokofu grounds allegation, claiming no suitable grounds were available for away games. I lost a lot of loved ones: 126 family members at a soccer game and several more to After Independence Defeatist Syndrome (AIDS). I also mourned the deaths of Uncle Kojo Shoot-gun, Justice Herrings and Reverend Dadzies' friend Oppong. I had some out of money experience. $46,000 got missing in mysterious circumstances. The Mallam at the Palace, who also doubles as a PE teacher, was accused, but I'm still not sure if he did it. Anyhow, he had to move to a new home in Nsawam. The Camp alerted me to millions of dollars being lost in Sahara. Has the desert already moved this far south? Probably it's the effect of global warming. To probe or not to probe? For some odd reason, Agya was against probing, so we kept mute and went about our business. One of the marvels of the year, was when, 200 Missing Persons (MP) each wanted a loan of $25,000 for cars. "Didn't some of u get new cars just 4 years ago?" I asked "Positive Change! " they replied "OK, but on your current salary, you'll need over 20yrs to pay back" " Your maths is terrible. I don't blame you. It's the Camp education" Uncle S.L.O May developed a rather unusual relation with Prah C.Q. Atta and they saw each other on a regular basis. Atta eventually asked May to go keep Mallam company at Nsawam. Why? Because according to him, S.L.O May had a lot more in common with the Mallam. Two illigal aliens, Dr. Kash N. Curry and Valetine. A. Tacks (VAT), products of the Institute of Manipulation & Failures (IMF), still roam freely on our streets. While we were at the camp, Agya told us Tackie was a criminal & the doctor was incompetent and would not touch us if we moved. Agya is yet to keep his word. Agya had an unconventional solution to the problem of uncles ignoring their children..... He brought in more uncles. We now had so many; some had nothing to do. One of them, who happen to be a Missing Person (MP), was left without a child, and we consoled him with the title senior uncle. Bra Diaspora, who lives with our rich and powerful Uncle, Sam Amedeku (USA) supported the family by sending us dough monthly. The amount of bread obtained from the dough did not increase exponentially, as it did in previous years…. And that was a good sign. One fine September morning, Asamoah Obeng Larbi hit Uncle Sam so hard, Bra had to stay home to take care of him. The dough stopped flowing. Uncle Sam spent the rest of the year chasing the illusive Asamoah in Half-Ga-New-Town. I've been asked to reconcile, but with whom, when and where? It wil be clear in 2002. Atta Papa promised to dedicate his life to fighting mosquitoes. Migration was the only way those insects could win. However, the year is over and those uninvited nocturnal patriots (UNP) don't even have passports. They love Ogyakorm to death. Probably, Atta Papa wasted too much time on us and not them. We told him we'll be all right, but on two previous occasions – '79 & '81 - he forcibly took as to his home. We hope he does not try it again. Anyway, he's been quiet lately, so hopefully he trusts Agya will care for us. I lost count of the times Agya was abroad. The Camp claims he's moonlighting, while the Palace insists he's gathering funds for palace renovation. Who to believe? I'll take a wait-and-see attitude. Anyhow, I hope Agya spends quality time with us in 2002. Times were hard, but I could speak my mind, without fear of discipline, albeit nobody paid me much attention. Agya promised a better Christmas next year. I hope he keeps this promise, if not I might reconsider my position in the palace. Would I go back to the Camp? Four years will tell and don't forget there are many more palaces and one more camp out there. PS: Atta moved to Kanda.