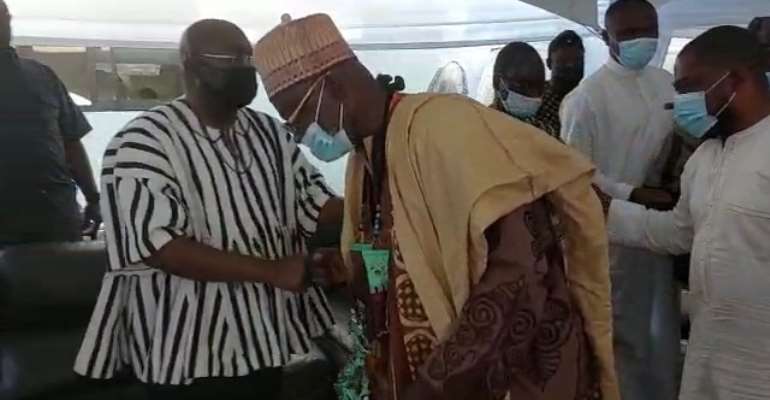 The Greater Accra Zabarma Chief and President of Ghana Zabarma Association, Sarki Pro-Umar Abubakar Tanko has on Sunday, September 19, 2021 joined colleague prominent Muslim and Traditional Chiefs to pay a courtesy call on the Vice President Alhaji Dr. Mahamudu Bawumia over the loss of his mother.

The Accra Zabarma Chief was accompanied by some of his cabinet members, philanthropist and opinion leaders within the Zabarma Community in Greater Accra.

Alhaji Pro-Umar Tanko console the Vice President on behalf of the Zabarma Community in Accra and Ghana at large and prayed for the soul of Hajia Mariama Bawumia to rest in the bosom of Allah.

He urged the Vice president to be strong and remain focus in his ambition to reach the highest position in politics and also continue the good work he is doing to transform the living standard of Ghanaians especially those living in the Zongo Communities.

The Greater Accra Zabarma chief who doubles as the President of Coalition of Zabarma Chiefs, Ghana, later signed the book of condolence on behalf of the Zabarma Community.

The mother of the Vice President Hajia Mariama Bawumia also known as Maame died in the capital, Accra on Monday 13 September 2021 and was buried on Tuesday, September 14 2021 in her hometown.

She had been hospitalised in a medical facility in Accra over the past few weeks.

She was 82-years-old a royal and a native of Kpasenkpe in the West Mamprusi District, Hajia Mariama was one of the first northern female students to gain admission to the prestigious Wesley Girls High School in Cape Coast in the Central Region.