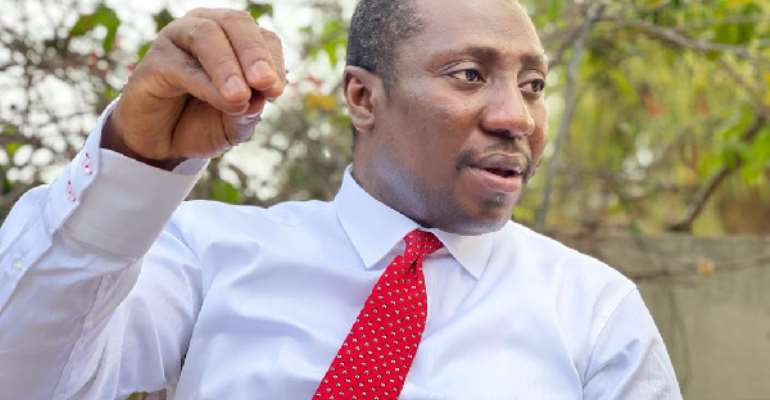 The Member of Parliament (MP) for the Effutu constituency in the Central Region, Alexander Kwamena Afenyo-Markin has accused Samuel Okudzeto Ablakwa of chasing political points with his rants about President Akufo-Addo’s chartered flights for foreign trips.

This follows the North Tongu MP's decision to continually pile pressure on government to provide accounts for the President’s foreign travels.

Samuel Okudzeto Ablakwa for months have been monitoring the foreign travels of the President accusing him of spending huge monies of the taxpayers on luxurious private jets.

According to his estimation, ithis year alone, the President’s travels with luxurious private jets has cost the taxpayer a whopping GHS10 million.

“Mr. Ablakwa’s whole issues with this is borne out of political mischief. On the issue of luxury, President Mahama within the period he served used charted jets. What he is doing is a political partisan argument,” the Effutu Constituency MP said.

Mr. Afenyo-Markin added, “It is important you point to the person his own mischief. Why is Mr. Ablakwa not talking about Mahama’s private charter travels? He is creating the impression that he is seeing this for the first time. He claims when the NDC was in power he was flying business. If we are talking about luxury then why didn’t he travel economy?

According to the New Patriotic Party (NPP) MP, President Akufo-Addo is not chattering private jets because of the luxury insisting that Samuel Okudzeto must be fair to government.

“I do not think the use of a charter flight for this trip or any other trip is because of the need for luxury. I believe strongly that Mr. Ablakwa must be fair to government,” Afenyo-Markin stressed.

Also speaking on the same platform, Samuel Okudzeto emphasized that he still believes the cost incurred from the chartered flights are needless and could be avoided to save money.

He notes that he will remain relentless and will keep pushing for accountability from the government.

Akufo-Addo, Paul Kigame, others to address YouthConnekt Afri...
15 minutes ago

I'm sorry, was running away from a prophecy that I'll be sho...
15 minutes ago