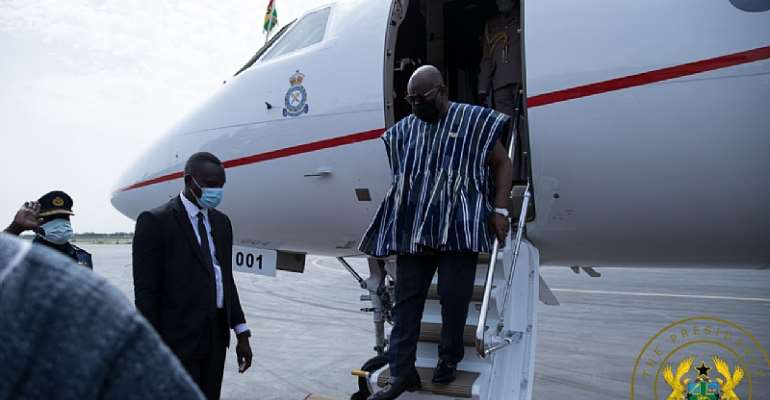 The Coalition for Social Justice (CSJ) has lambasted President Akufo-Addo for traveling in a luxurious jet to the United States of America (USA) for the United Nations (UN) General Assembly.

According to the coalition, the president’s insatiable taste for luxury and comfort is not just wasteful but disrespectful and nauseating to the citizenry at a time when there are cries over the economic hardship in the country.

In a press statement from the CSJ, it says “this latest decision by the President amounts to an utter disrespect for the people of Ghana and exposes the President as someone with an insatiable taste for luxury and comfort irrespective of what it takes to satisfy such a high taste. We remember vividly how then candidate Akufo Addo boarded trotro and took a sip of sachet water as a demonstration of his sense of modesty and his preparedness to protect the public purse.”

The coalition insists that the conduct of President Akufo-Addo in recent times is nothing short of opulence and ostentation at the expense of the average Ghanaian who struggles from dawn to dusk just to make ends meet.

CSJ in its statement says it appears the high cost of living emanating from escalating fuel prices, foodstuff prices, transport fares and high cost of utilities means nothing to the President.

“The Coalition for Social Justice finds the conduct of the President highly reprehensible and nauseating especially that the Presidential Jet for the Republic has been proven to be in excellent flying condition and is actually been flown around by other officials including some foreign presidents such as the Liberian President HE George Oppong Weah,” the statement from the coalition concludes.

Meanwhile, North Tongu MP, Samuel Okudzeto Ablakwa has vowed to push until government accounts for the expensive air travels of the President.

Find below the full statement from the Coalition of Social Justice:

No machinations will break ordained Alan as NPP choice for 2...
41 minutes ago