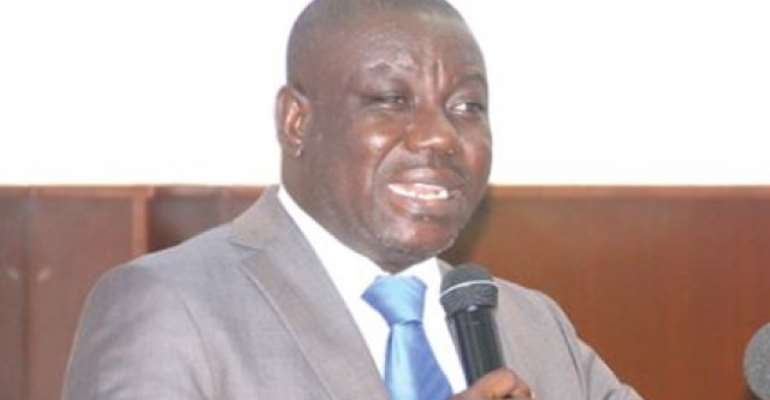 The Member of Parliament (MP) for Bolgatanga Central Constituency, Isaac Adongo has said Ghanaians should be worried over the country’s 3.9% economic growth.

It comes on the back of the recent announcement from the Ghana Statistical Service (GSS) that the economy grew by 3.9% year on year to June 2021 from a negative 5.7% in the same period of 2020.

According to Isaac Adongo, this should not only worry Ghanaians but should be of great concern to the ruling government as well as all well-meaning analysts.

He insists that to celebrate this in the manner in which the government is doing, especially when Moody's affirms Ghana's growth outlook at negative, is mediocre and a demonstration of the lack of appreciation of the potential of the economy.

“At 3.9%, the economic recovery is rather sluggish, suggesting that most businesses are still doing far below capacity as Government's fiscal measures and worsening financial sector are unable to help in reviving businesses and funding growth.

“Clearly, this is an automatic or auto-pilot growth consistent with the survival instincts of individuals, households and businesses,” part of a statement from the MP has said.

The Bolgatanga Central MP argues the recovery is no surprise because the economy was expected to bounce back post-Covid-19.

Isaac Adongo notes that the country’s economy is still struggling and until good policies are implemented by the government things will not improve in the lives of Ghanaians.

Insisting that things cannot get better under the ruling government, the Bolgatanga Central MP says it is why the National Democratic Congress (NDC) is calling on Ghanaians to boot out the NPP come 2024.

“We are further making a passionate appeal to the good people of Ghana to help save our economy from brazen and unmitigated robbery, hopelessness and ultimate collapse by voting out this administration and any surrogates or leaches that they intend to impose on our destiny,” Isaac Adongo concludes in his statement.

When investors and rating agencies look to Ghana, what worry them most about the economy? It is the unsustainable debt levels, rising costs of debt affordability, high debt service, faltering revenue mobilization, spiraling non-performing loans, credit squeeze to the private sector and the alarming gross financing requirements of Government and rising fiscal and external vulnerabilities.

In recent times, Moody’s, one of the rating agencies, just like Fitch, has articulated these concerns aptly in its report on the economy.

But instead of reading the report in the whole for proper appreciation and self introspection, the government expectedly zeroed in on the agency’s comment on growth after the easing of COVID effects to continue tickling itself for laughter on something it has less control on.

To start with, Moody's optimism that growth would rebound is the obvious. As COVID-19 restrictions ease and lives return to normal, economic activities will pick up and that should lead to strong growth, especially when compared to prior year. That is why the news from the Ghana Statistical Service (GSS) that the economy grew by 3.9% year on year to June 2021 from a negative 5.7% in the same period of 2020 should worry the government and all well-meaning analysts the more.

At 3.9%, the economic recovery is rather sluggish, suggesting that most businesses are still doing far below capacity as Government's fiscal measures and worsening financial sector are unable to help in reviving businesses and funding growth.

Clearly, this is an automatic or auto-pilot growth consistent with the survival instincts of individuals, households and businesses.

To celebrate this in the manner in which the government is doing, especially when Moody's affirms Ghana's growth outlook at negative, is mediocre and a demonstration of the lack of appreciation of the potential of the economy.

As a matter of fact, Ghana's foreign currency denominated bonds have been downgraded by Fitch due to worrying major fiscal risks and external vulnerabilities.

Ghana's recent growth trajectory as reported by the Ghana Statistical Service provide a clear case of lack of Government support. For example, what has Government done to take credit for the reopening of restaurants, drinking bars, chop bars and hotels, among others? Was there any special incentives in 2021? Absolutely nothing.

These are some of the businesses that were closed due to COVID-19 restrictions in the period to June 2020. If the pandemic is gradually dying off and the restrictions are being relaxed, expect the businesses to reopen naturally, albeit at a lower capacity. It is, therefore, understandable that there will be growth, but the rates will be uninspiring because Government has done nothing to support them.

From the effects of a negative growth rate in 2020, a strong recovery of the economy towards its original potential required real quarterly non-oil growth of between 7% to 9% to achieve what can be described as robust economy. Interestingly, this level of growth requires no effort from Government. It ought to come naturally and automatically because, man is rational and a predictable economic agent. This is trite knowledge.

The fact that we are rather registering economic growth of 3.9% from negative or zero betrays a struggling economy with huge challenges afflicting businesses, militating against their ability to breath adequately.

One of these challenges is the tax regime and the austerity being pursued by Government in the midst of COVID-19 that is suffocating businesses. Over the period, Government's desperate desire for revenue has pushed it into other awkward policies that are compounding the problems of businesses in Ghana: taxes have been increased, the cedi IS struggling, port charges are on the ascendancy and petroleum prices are increasing on an hourly basis in the dark.

Instead of giving businesses real stimulus packages, the borrowing-minded government has even compounded the problem with their monstrous presence in the market on a daily basis, competing with and crowding out the private sector in their search for money to borrow.

Which competent economic management team does this?

Under such circumstances, how is this Government expecting businesses to recover to their potential after COVID-19?

It is more worrying, given a negative growth of 4.8% in quarrying and mining and more than 18% contraction being experienced in the oil and gas sub-sector .

To achieve Government's revenue targets, the economy must return to its full growth potential of the pre-COVID-19 era and a rebound in growth in the mining and quarry sub-sector.

The 5.2% growth of non-oil GDP and -4.8% in mining and quarrying show an economy gasping for breath to put people to work and food on their tables.

A lot of hard work is needed to fix this limping economy, not a lot of talk and propaganda.

Instead of shopping for experts to help them out of this quagmire, they are spin-doctoring and obfuscating the issues and celebrating an economy that is morbid and needing real fiscal and financial aid and robust monetary policies to recover.

Clearly, the ordinary Ghanaian (corporate or individual) has not yet been restored to the level of comfort in which they were before Nana Addo and his COVID-19 came.

The economy must be brought back to the pre-COVID-19 era and begin to register more positive numbers to create an impact on the lives of people. In order words, until we get there, it is safe to say that the economy is still struggling to return the people who lost their jobs during Covid-19 back to work, talk less of employing the hundreds of thousands of those already unemployed.

It takes sound policies to achieve this. For now, Government hasn't done anything close to that. Conversely, people are being made worse off by the harsh economic environment.

Under Nana Addo and Bawumia, 'the average man's hand goes towards the mouth only when there is the need to drive away flies, not to put food into the mouth'.

Whike this is ongoing, Ghana's financial governance has been in limbo with the Finance Minister, Ken Ofori-Atta conspicuously missing. Instructive, this is the time when he is needed to provide leadership and direction to steer this country out of their own ditch.

As President Nana Addo and his Vice, Dr Bawumia continue to launch one mediocre project after the other, the key official to drive the financing of these Government's programs to ensure sustainable funding, is nowhere to be found. Ghana under NPP is being treated like a family property where people work at will.

Even when they claim they have several competent people who can provide leadership to get us out of this quandary, the President thinks it must just be only one man (his nephew).

Why is it that only that one person from the President's family must hold on to the role of a Finance Minister? This obviously speaks volumes about what this "trusted family member" is sitting on for which the President feels uncomfortable to relinquish him from power.

Ken Ofori Atta's continuous presence there has nothing to do with competence. He is there for a reason that only he and the President know.

Telling Nana to sack Ken Ofori-Atta is the biggest joke. The only way Ghanaians can get to see the most cherished secrets of Nana Addo and the NPP that his Finance Minister is sitting on is for the good people of Ghana to intervene at the polls of 2024.

We are further making a passionate appeal to the good people of Ghana to help save our economy from brazen and unmitigated robbery, hopelessness and ultimate collapse by voting out this administration and any surrogates or leaches that they intend to impose on our destiny.