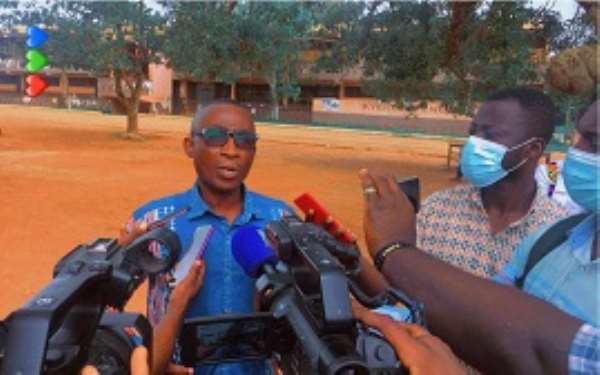 The Headmaster of Kumasi High School in the Kumasi Metropolis Mr. Bernard Hall-Baidoo is advocating for alternative credible examinable bodies to rival the existing West African Examination Council (WAEC) as one of the measures to stem the perennial exams leakages and other malpractices associated with the WASCCE exams.

According to the educationist, most organizations in Africa find themselves in undue lethargic tendencies especially when they are offered the monopoly.

He added that stakeholders in the education sector must support the call for the mother examination body to be competed for their services due to the current prevailing circumstance.

Examination leakages amongst the WASSCE and BECE examinations have been rife in recent times while the governing body, WAEC has been accused of being incompetent in organising credible exams for both levels of candidates with the topical one being the rescheduled Business Management and Physics Paper Two for the 2021 WASSCE.

Some stakeholders have since raised concerns over the unfortunate reasons for the rescheduled papers indicating further that the examination malpractices were becoming one too many, bringing the credibility of the WAEC certificates into disrepute.

But speaking to this reporter during the presentation of an 88-inch laser flat screen by the 1971 ‘Mmerante year group’ to the Kumasi High School students on Tuesday September21, 2021, Mr. Bernard Hall-Baidoo advised WAEC to beef up its security and further sanction the perpetrators behind the malpractices with stiffer punishment since the affected students of the recent rescheduled Business Management and Physics were going through psychological and emotional experiences.

“I would recommend for other rival credible examination bodies to be given the opportunity to also organize them because most organizations enjoying undue monopoly tend to be complacent.

"This would also help stem the perennial examination leakages and other forms of examination malpractices. The management of the Kumasi High School has held series of counseling for the affected students who are psychologically and emotionally traumatized by the rescheduled papers. I am equally concerned as to why the offenders of the practice are not duly punished to serve deterrent to others,” he suggested.

Touching on the presentation Mr. Bernard Hall-Baidoo commended the 1971 year group of the school for the gesture adding the gadget has come at a time most of the students jump the school walls to town in search of entertainment, especially during the weekends.

The cost of the television was estimated at thirty-seven thousand Ghana Cedis.

The former Kumasi Metropolitan Assembly City Engineer Mr. Charles Ampomah Mensah who happens to be the Convener of the 1971 year group of the Kumasi High School during the presentation admonished students to be serious with their books.

He further urged them to make good use of the gadget especially during the weekends in watching football matches and other educative and entertainment programmes.

He encouraged the student population to learn hard since that was the surest way to become successful in life.

Encroachers on KNUST lands will face my wrath — Otumfuo war...
2 hours ago