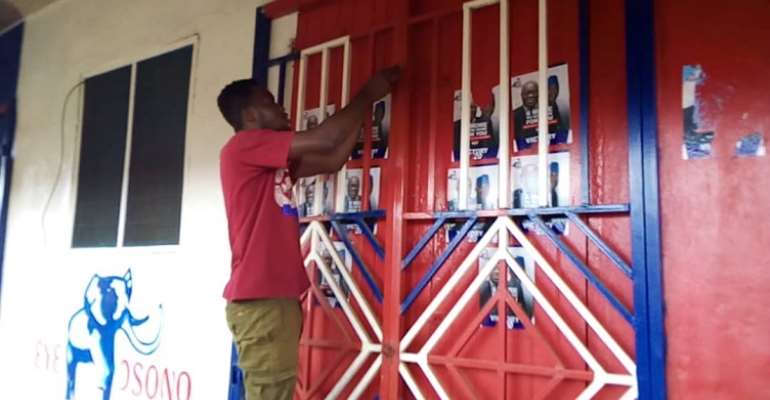 Some aggrieved members of the ruling New Patriotic Party (NPP) in the Akyem Apedwa in the Abuakwa South Constituency of the Eastern Region are rampaging following the appointment of a new MCE, Akosua Asabea Annan as the Municipal Chief Executive for Abuakwa South.

The supporters clad in red armbands and holding placards with inscriptions expressing their displeasure and chanting war songs said all positions in Abuakwa South have been given to the residents from Kyebi leaving other communities.

The angry NPP supporters who begun series of the protest from last Sunday on Wednesday morning again besieged the party office and locked it at Akyem Apedwa.

They also burnt flags and other paraphernalia of the party in expressing their displeasure.

Madam Akosua Asabea Annah has been nominated to replace Kojo Ofori Safo who spent two years in office as MCE for Abuakwa South.

But the aggrieved supporters of the party mostly from the Akyem Apedwa community said the MCE was removed to satisfy the parochial interest of some individuals.

The supporters of the former MCE said they have followed the NPP party since 1992 in the constituency because they have never had a single appointment since NPP was formed although they have worked for the party to return to power and won all polling stations in the constituency in the last two general elections.

They claimed Mr.Ofori Safo of Abuakwa South Constituency, have been denied appointment for long albeit suffering enough for the party.

They alleged that the former MCE, Mr. Ofori Safo was denied the position because he didn’t come from Kyebi tribal line being towed by the Kyebi.

According to them, “We don't want any appointment except the MCE position. We are demonstrating to tell the President that we are not happy with the nomination that he has made in Abuakwa South” adding that “winning an election is a major contributing factor to who becomes the next President and MCE thereby if we have done 100 percent of both why must we be denied the second when the President got the first”.

Two Ntiamoa, former Polling station Women Organizer of Apedwa said “We are demonstrating to tell the President that we have ceased to work for the party”.

Meanwhile, the Eastern Regional Youth Wing of the ruling New Patriotic Party has implored all unsuccessful candidates who were vying for the metropolitan and District Chief Executive positions to support those nominated by the President to help facilitate unity in development.

The Regional Youth Organizer, Jerry Osei -Opoku on Tuesday in a statement said “To all who aspired for same but were unsuccessful, we send our admiration for your zeal and willingness to serve our Nation. We humbly implore you to offer optimum cooperation, unity, and support to the nominees to endure a smooth approval by the respective assemblies”.

According to him, “the New Patriotic Party remains committed to seeing significant improvement at all levels of our Nation and we are confident that you will perform creditably in your roles and your tenure shall be pivotal in dispensing developmental projects and policies to the remotest locality of your area”.