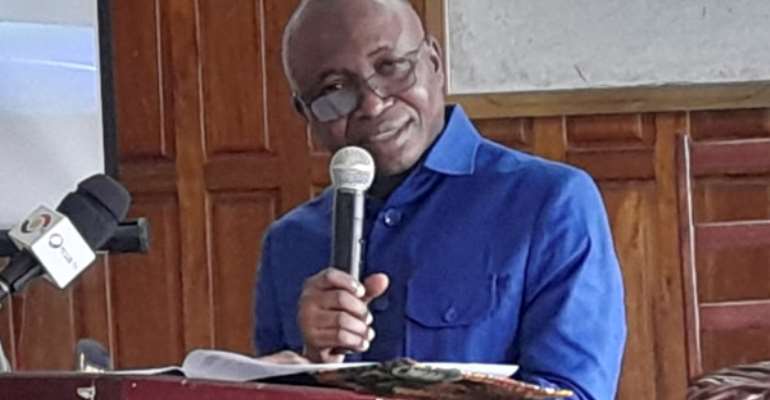 Prof. Elvis Asare-Bediako, the Vice-Chancellor of University of Energy and Natural Resources

The University of Energy and Natural Resources (UENR)-Sunyani, organized a "Smart Systems Symposium 21" on Friday 13th September 2021, under the auspices of the School of Sciences of UENR and Bisvel Communications limited (MTN Distributor in Bono).

The symposium which is an annual event, brought together seasoned researchers, academics, industry players and students to brainstorm on the illegalities associated with illegal mining and illegal logging and how technologies could be used to control such activities.

The theme for the 2021 edition of the symposium was “The Use of Smart Technologies to Control Illegal Mining and Logging in Ghana”.

The Vice-Chancellor of UENR, Professor Elvis Asare-Bediako, who was the chairman of the event said the uncontrolled activities of small-scale miners had caused an enormous destruction to the beautiful landscape in mining areas of the country.

Addressing the gathering, he said "I have observed with much deep concern the increasing rate at which individuals engage the service of foreigners to destroy the national reserves of the country. If care is not taken to address the spate of forest depletion in Ghana, the future leaders of our dear nation will rise to blame us."

Prof. Asare-Bediako added that since the uncontrolled activities of illegal miners were adversely affecting water bodies, vegetation, wild animals, human health and safety, there was the need for the regularization or abolition of such activities, while abandoned mining sites across the country should also be restored.

Delivering the welcome address, the acting Pro Vice-Chancellor of UENR, Professor Felix Adebayo Adekoya, explained that the Smart Systems Symposium series was to stir and stimulate ideas, innovations and discussions towards a Digitized Ghana.

"Succinctly, we hope to inform, shape and influence social, economic and government policies, as well as researches through the symposiums,” he stated.

Prof. Adekoya proposed that government should put up an enabling framework for mining companies to set up refinery processing factories and vocational training schools in all mining areas in other to boost employment and the economy and thereby discourage illegal mining.

A research paper on how to control illegal mining in Ghana was presented by a lecturer of UENR, Mr. Jeff Dacosta Osei. Mr Dacosta emphasized on the need to use satellite technologies and remotes sensing to track the activities of illegal miners in the deep forest.

During the discussion session, the discussants, Dr. Jonas A. Akudugu and Dr. Peter Appiahene, both lecturers at UENR, were of the view that deploying surveillance systems to fight illegal mining is long overdue. The argued strongly that there are available technologies that could be deployed by the appropriate state institutions bring lasting solution to this environmental challenge.

Illegal logging is viewed as unethical harvesting, processing, transporting, purchasing, or selling of timber in violation of national and international regulations. It has a catastrophic effect on some of the world's most important surviving forests, as well as on the people who live in them and rely on the resources they offer.

He added that illegal logging has fueled disputes between indigenous and local communities, as well as violence, human rights violations, extortion, sponsorship of armed conflicts, and poverty increasing. "Illegal logging threatens the forest sector's legitimacy and impedes governments' efforts to adopt the best forest management for a lasting ecological sustainability."

Dr. Samuel Boateng, a lecturer at the Department of Computer Science and Informatics, in his presentation, proposed an Artificial Intelligence monitoring system that could be deployed to track down the logging activities in Ghana.

A discussant, Mr. Caleb Mensah, a representative from the Earth Observation Research & Innovation Centre (EORIC) also argued that EORIC has the technical expertise to monitor the forest zones and the research national forests to track all illegal activities within these preserved national assets.

In his closing remarks, the chairman of the event said if the government and the forestry commission could embrace the technological innovations and encourage the engagement of the youth within the mining zones, including the businessmen who engage the service of this youth, there is an absolute assurance that these illegalities would be curbed.